Entered into active service with Indian Navy in 2013, INS Satpura is an indigenous Shivalik-class stealth multi-role frigate. Built by Mumbai’s Mazagon dock, INS Satpura was delivered to the Indian Navy on 9th July 2011 and was officially commissioned on 20th August 2011. The second ship under the Project 17 program, INS Satpura has a length of 142.5 m, a beam of 16.9 m and a draught of 4.5 m. Powered by two French Pielstick diesel engines and two General Electric LM-2500 gas turbines, the multi-role frigate is capable of cruising at a maximum speed of 32 knots. Moreover, INS Satpura displaces about 4,900 tonnes at normal load and 6,200 tonnes at full load. The vessel has the capacity to accommodate around 257 people, including 35 officers. In April 2017, INS Satpura received the ‘Best Ship’ trophy for capital ships during the Fleet Award Function 2017, which was organised to celebrate the completion of an operational cycle of Eastern Fleet activities. 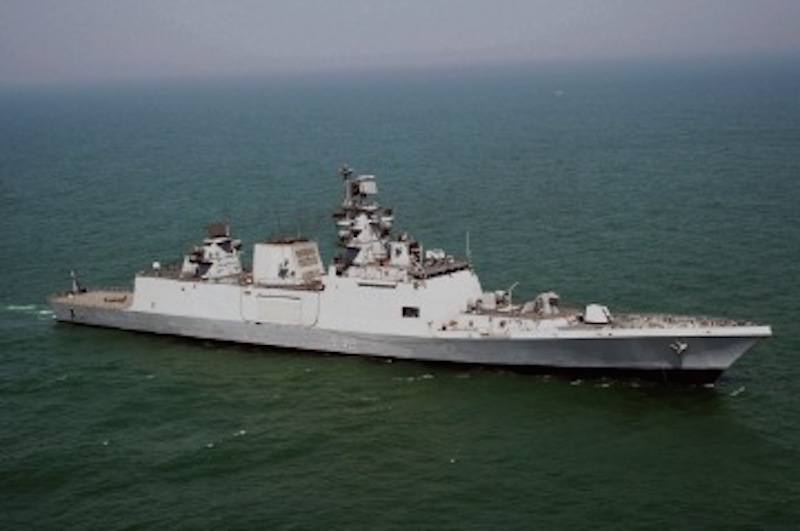 The Project 17 to build three multi-role frigates for the Indian Navy was conceived in the 1990s in order to fulfill the naval force’s requirement for stealthy frigates. The specifications for the project provided by the Directorate of Naval Design (DND) envisaged a class of 5000-ton stealth frigates that incorporates advanced signature suppression and signature management features. The concept of first stealth warships built in India turned into reality when the formally ordered first three units in early 1999.

However, the delays in Naval Design Bureau’s (NDB) design inputs for weapons suite and the delivery of high-strength D-40S steel from Russia also delayed the production till 2000. At the same time, Defence Research and Development Organisation (DRDO) and the Steel Authority of India had developed the required AB-grade steel indigenously in order to overcome the steel supply problems. Finally, the construction of the lead ship in the series, INS Shivalik, started in December 2000 and was launched in April 2003 as well as commissioned in April 2010. The construction of the second ship, INS Satpura began in October 2002 and the vessel was launched in June 2004. INS Sahyadri’s, the third and final multi-role frigate of this class, construction was started in September 2003 and launched in May 2005 before commissioning in July 2012.

INS Satpura, which was named after Satpura hill range, joined the navy bringing a number of capabilities along to strengthen the force. Like her sister vessels, the design of INS Satpura traces back to Russian-built Talwar-class frigates of Indian Navy.  However, heavier than the 4,100-tonne Talwar-class frigates, INS Satpura features enhanced stealth and land attack capabilities.  The most significant feature of the vessel is its stealth design, which helps the ship to make it difficult for the enemies to detect it due to reduced radar, infrared, electronic, acoustic and visual signatures.

After being officially commissioned into the Eastern Naval Command headquartered at Visakhapatnam, INS Satpura has been deployed in several parts of the world under the Indian Navy’s flag. The frigate also has been participated in several exercises along with other navies to strengthen its combat capabilities and the bilateral ties. In 2012, INS Satpura participated in the Malabar 2012 exercise with the Navy of United States. Apart from INS Satpura, the Indian navy’s destroyers including INS Ranvir, INS Ranvijay, corvette INS Kulish and replenishment oiler INS Shakti were also part of the exercise. The US Nay’s elements participated in the exercise included Carrier Strike Group (CSG) 1 that consisting of USS Carl Vinson, the Ticonderoga-class guided-missile cruiser USS Bunker Hill, embarked Carrier Air Wing (CVW) 17 and the Arleigh Burke-class guided-missile destroyer USS Halsey. In addition, Military Sealift Command’s fast combat support ship USNS Bridge was also part of the drill.

In May 2013, INS Satpura, along with other three Naval ships that belong to the Eastern Indian Fleet, participated in a joint exercise with the Malaysian Navy before arriving at Tien Sa Port in Vietnam’s central Da Nang city as part of a four-day friendship visit to the city. In the same month, the vessel had also participated International Navies IMDEX 2013 held at Changi Naval Base in Singapore. The third naval exercise that INS Satpura had participated was the bilateral Naval exercise SIMBEX-15 with Singapore Navy in May 2015. The exercise was conducted to strengthen bilateral ties and improve inter-operability between navies of the two countries. In June same year, INS Satpura, along with INS Kamorta, arrived in Fremantle, Australia while transiting the Indian Ocean and conducted training and security patrols.  Later, INS Satpura, along with fleet tanker and support ship INS Shakti, visited Sattahip Port Thailand in June to strengthen the maritime security and defence cooperation between India and Thailand. The four-day visit saw activities including official calls, guided tours of the ships and professional exchanges between the two navies.

In 2016, the major event that INS Satpura participated was the 25th edition of Exercise RIMPAC held at Hawaii, from 30 June to 04 August. India’s participation in this multilateral naval exercise was aimed at supporting maritime security in the Indo-Pacific region, and also to contribute to peace and stability of the global commons. Later in the August, en route to India after Exercise RIMPAC-16, INS made a two-day visit to Port Majuro, for an operational turn around as part of its deployment to the Western Pacific Ocean. Last year, the vessel had also made a four-day visit to Singapore as part of the deployment of the Eastern Fleet to the South China Sea and Western Pacific.

In 2017, INS Satpura, along with INS Kadmatt participated in Passage Exercise (PASSEX), an exercise with the Japanese Marine Self Defence Force. As part of India’s effort to strengthen the relationship with Japan, the Indian frigate joined the Japan’s Murusame Class destroyer, JS Kirisame during the exercise.