You are here: Home › Marine Technology › What is a Bearing Scraper?
TwitterFacebookLinkedInPinterestBuffer

A bearing scraper is a precision tool with multiple sharp-edged blades. It is operated by hands to level out high spots on soft metal engine bearings.

As the plane and smooth bearings offer advantages over rolling elements, scraping comes into an influential role.

The scraping process is aimed at achieving the correct geometrical alignments by evenly spreading the points of bearing contact.

Scraping is the only procedure to sculpt flat straight surfaces evenly across the length and width of their mating surfaces in cast iron, of which, most types of machinery are built. 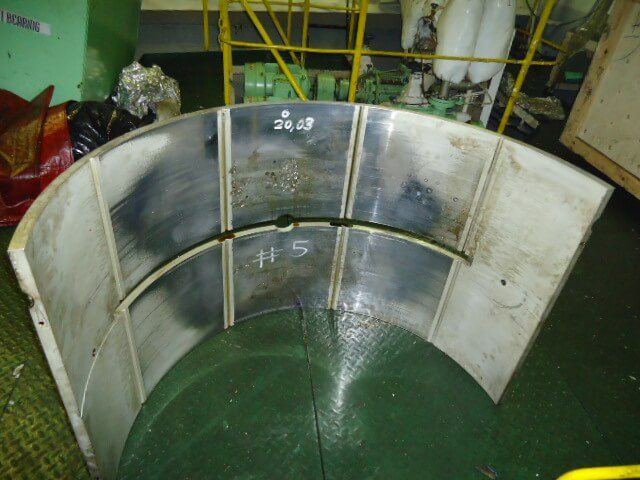 Why scraping of marine bearing is needed?

As marine bearing has the most pivotal roles of conducting relative motions, keeping the rotatory machinery aligned, maintenance is of the utmost importance.

Construction and Types of Scraper Tools

The basic construction of a scraper consists of:

Hanger: A small hole in the upper body of the scraper that is meant for placing the tool upright in the kit room or the designated area.

Handle: The handle starts from the top and follows till the edge of the shaft is generally made up of wood usually circular in shape to provide grip and facilitate handy and easy operation.

Shaft/Shank: This is the longitudinal cylindrical metallic part generally made of hardened or tempered steel which starts at the periphery of the handle and leads to the blade.

Blade: The lowermost operating part of the scraper is the blade whose shape may be triangular, curved as per the desired type of scraping and the scraper.

In general, there are mainly three types of scrapers:

Flat or chisel type scraper: This type of scraper is also called the end scraper and looks like a chisel. It comes with sharp and slightly rounded ends aimed at the corner’s operation and debarring the corners to touch the working or mating surfaces and leave scratches.

Triangular Scraper: A triangular scraper, generally made up of bronze or a white metal has a triangular blade with three corners running to a common point. At the tapering end of blades, the edges of the blades are not perfectly straight but rather curve slightly. Their typical use is to deburr holes or the internal surfaces of bush-type bearings.

Curved scraper: A curved scraper is incorporated with relief on its bottom and an integral shank fitted with the handle made of wood to provide grip. This type of scraper has a curved blade and two cutting sharp edges culminating in a rounded end or a point and they are not generally used to dig out deep pockets of Babbit or soft metals of an engine bearing while it facilitates light scratch even in thin areas of an engine bearing, crankshaft main journal bearings or rod bearings.

This type of scraper is generally used in bearing operation.

How bearing scraping is done?

The preparations that should be done before scraping:

Use of scraper or methodology of scraping:

USS Nimitz: One of The Biggest War Ships in the World

What Is a Deck Prism On Ships?

Rolls-Royce And Inmarsat Sign Ship Energy Management Agreement
Want to share your tips and advice? Got questions? Visit the community forum to ask questions, get answers, meet people, and share your tips!

Ritbik is a student of Marine Engineering at IMU Kolkata and has research interests include Maritime Technology and Subsea Structures. He is an avid reader and writer and has been indulged in technical and creative writing for a long time.