What is NOx and where does it come from??

NOx pollution occurs when nitrogen oxides are released as a gas into the atmosphere during the high-temperature combustion of fossil fuels.

These nitrogen oxides consist mainly of two molecules, nitric oxide (NO) and nitrogen dioxide (NO2) along with a few others that occur in much lower concentrations. These molecules- Nitrous oxides are a significant greenhouse gas that plays an important role in Global Climate Change. 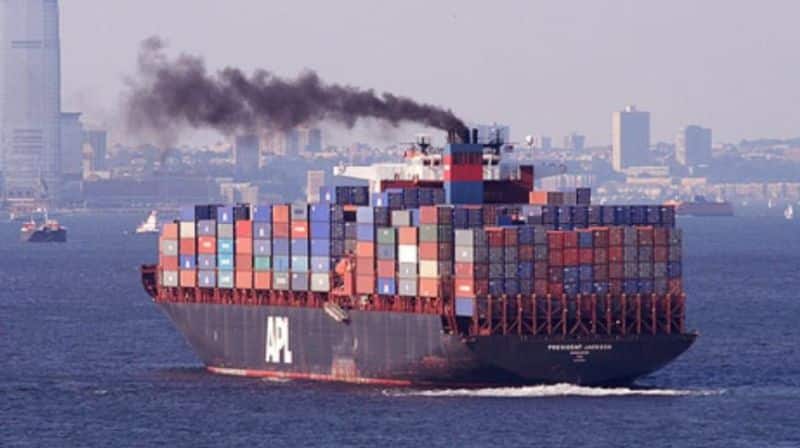 Nitrogen oxides form when oxygen and nitrogen from the air interact during a high-temperature combustion event. These conditions occur in Internal Combustion Engines and fossil fuel-powered electricity plants.

NOx gases play an important role in the formation of smog. When exposed to the UV rays in sunlight, NOx molecules break apart and form ozone (O3). The problem is made worse by the presence of volatile organic compounds (VOC) in the atmosphere, which also interacts with NOx to form dangerous molecules. Ozone at the ground level is a serious pollutant, unlike the protective ozone layer much higher up in the stratosphere.

In the presence of rain, nitrogen oxides form nitric acid, contributing to the problem of acid rain.

Nitrogen oxides, nitric acid, and ozone can all readily enter the lungs, where they create serious damage to delicate lung tissue. Even short-term exposure can irritate the lungs of healthy people.

For those with medical conditions like asthma, just a short time spent breathing these pollutants have proved to be fatal. This air pollution can lead to respiratory diseases such as emphysema and bronchitis. NOx pollution can also worsen asthma and heart disease and is associated with elevated risks of premature death.

The International Shipping Industry is facing an increasingly tight regulatory environment, especially in terms of limits imposed upon emissions to air. And with the entry into force of the International Marine Organization’s (IMO) NOx Tier III limits on January 1st 2016, a part of MARPOL Annex VI, the regulations governing marine emissions became significantly tougher and stringent to follow.

As per MARPOL Annex VI, Regulation 13- Nitrogen Oxides (NOx), the Nitrogen oxides from diesel engines on board are to be controlled as follows 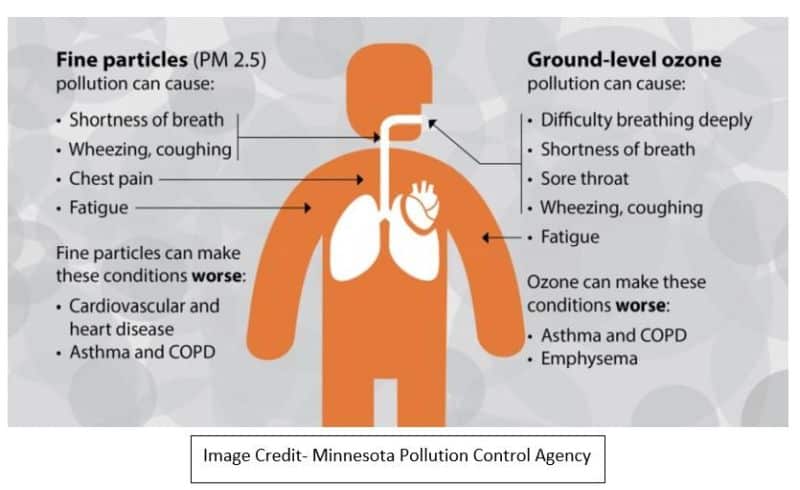 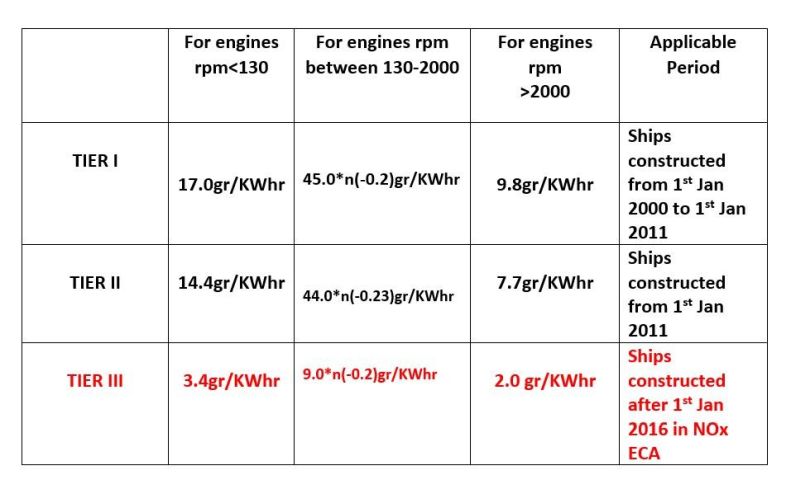 The NOx emission limits are set for diesel engines depending on the engine maximum operating speed (rpm), as shown in the above table, Tier I and Tier II limits are global, while the Tier III standards apply only in NOx Emission Control Areas.

There are two exceptions – engines used solely for emergencies and engines on ships operating solely within the waters of the state in which they are flagged. The latter exception only applies if these engines are subject to an alternative NOx control measure.

Emission Control Areas must comply with NOx “Tier III” emission limits which means that they must emit 80% less nitrous oxides than a “Tier I” complaint engine. Under these regulations, ships which are keel-laid after January 1st 2016 and operating in the United States/Canadian Emission Control Areas(ECAs) must comply with the new emission limits.
These emission limits are applicable for engines with an output power of more than 130kW installed on ships with more than 5,000GT

2) Use of abatement technology such as various forms of water induction into the combustion process (with fuel, scavenging air(in-take air humidification), or in-cylinder), exhaust gas recirculation, or selective catalytic reduction. 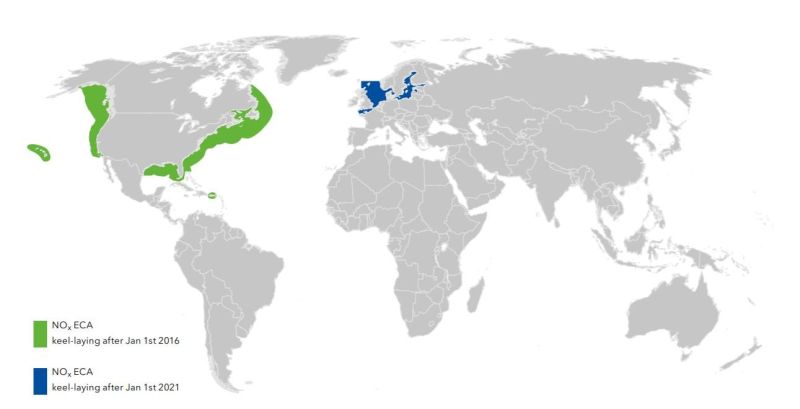 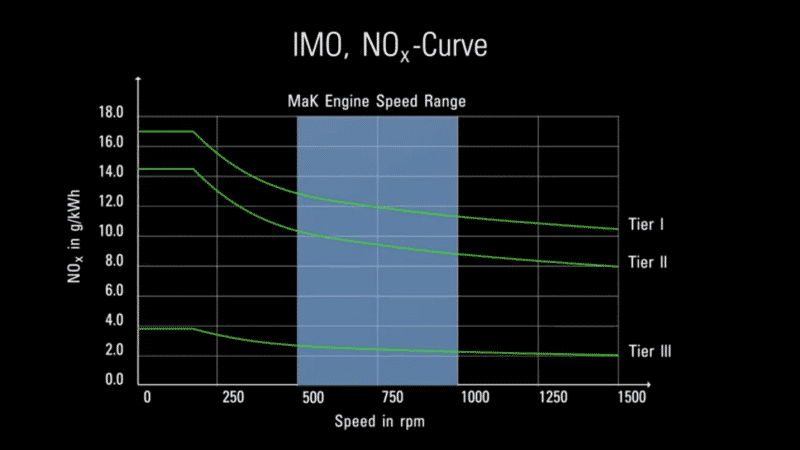 Selective Catalytic Reduction is a means of converting nitrous oxides in the exhaust with the help of a catalyst into diatomic nitrogen and water.

A reductant Anhydrous Ammonia (NH3), Aqueous Ammonia (Ammonium Hydroxide) or Urea (Carbamide) solution is added to a stream of exhaust gas and is adsorbed onto a catalyst. Carbon Dioxide (CO2) is a reaction product when urea is used as the reductant.

This exhaust gas after-treatment technology has a NOx abatement capability Of more than 80%. The SCR concept involves injecting a Urea-Water solution into the exhaust gas stream in combination with a special catalyst unit.

The SCR is considered as an additional and independent exhaust treatment system and as such does not interfere with the basic engine design or combustion process.

The process diagram below gives a better understanding of the SCR system wherein the urea interacts with nitrous oxides present in the incoming exhaust gas, in the presence of a catalyst, converting it into free nitrogen and water vapour.

The Maritime Environmental Protection Committee (MEPC) At The IMO has published guidelines for the certification of selective catalytic reduction (SCR) systems, referred to the “SCR Guideline”, namely IMO Resolution MEPC.198(62).

In the High-Pressure SCR, the reactor is placed before the turbocharger. A sufficient exhaust 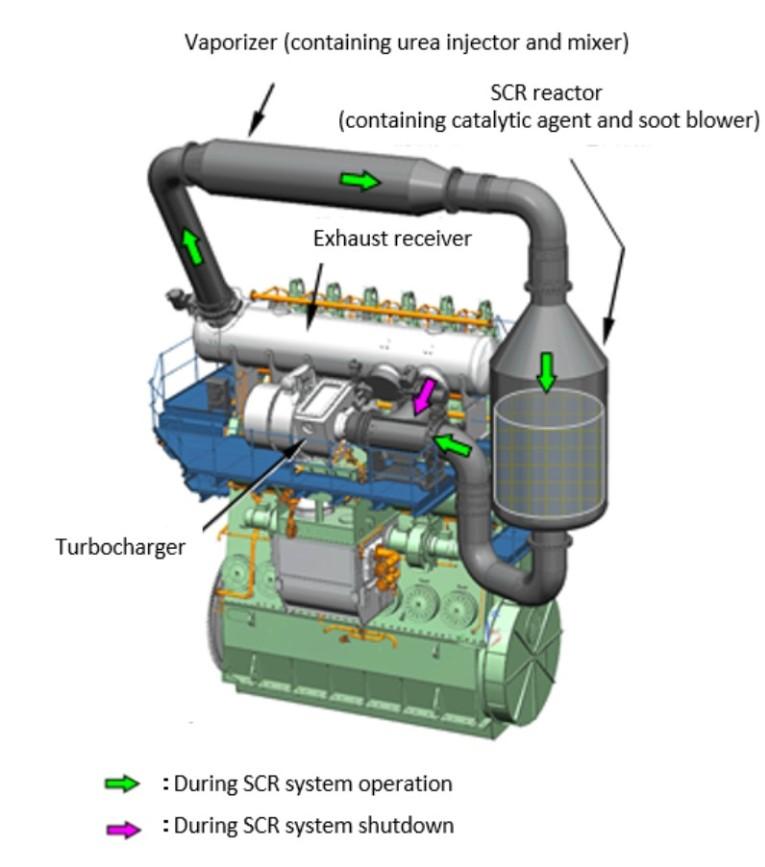 gas temperature is to be maintained between 300 to 400 deg Celsius, which might be challenging when the engine is running at low loads and manoeuvring.

Therefore, for two-stroke engines, the most likely location of the SCR unit is before the turbocharger in order to expand the active range of SCR operation. This has little to no effect on the engine combustion process.

It is possible to run high-pressure SCRs on Heavy Fuel Oil. 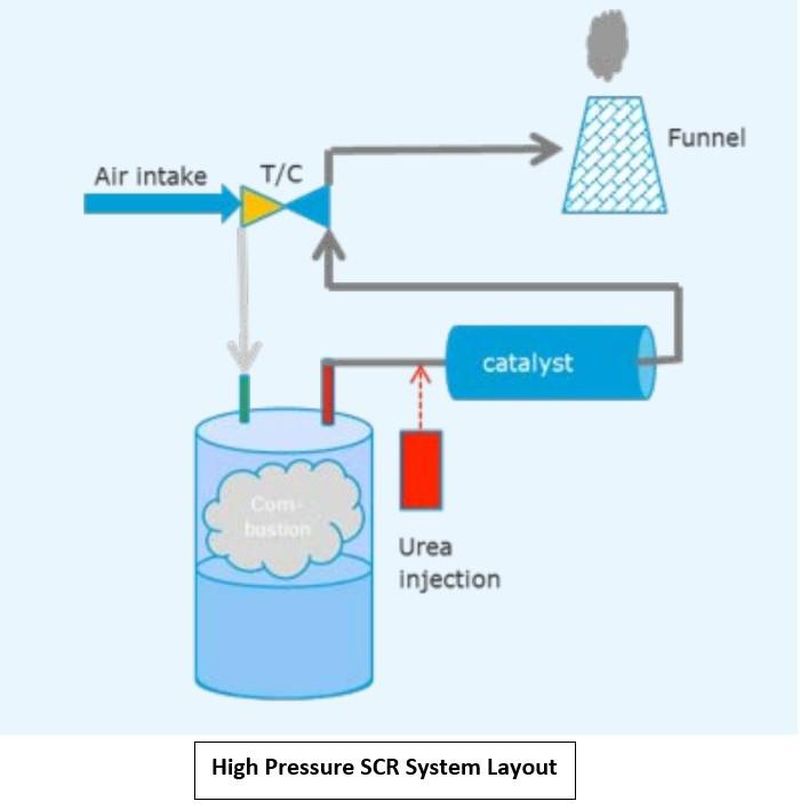 In Low-Pressure SCRs, the reactor is placed after the turbine. Pre-heating of the exhaust gas stream may be necessary in order to achieve a sufficient temperature at the reactor inlet for the catalytic reaction. Some power generation may be needed for preheating. 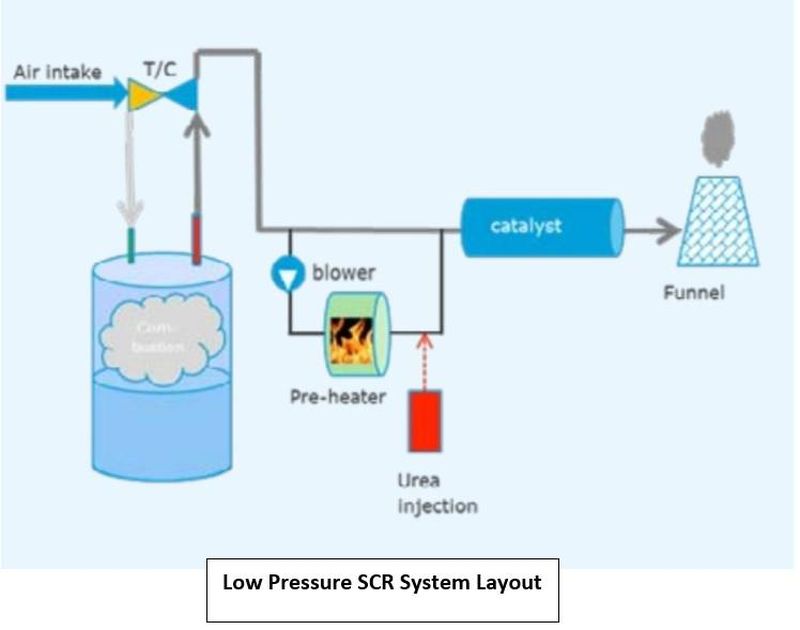 Components of an SCR

The dosing unit consists of a compact external dosing system having a urea-water solution tank. The tank size depends upon how often the vessel enters NOx Tier III areas and how often the SCR is put in use. Urea Tank capacities range from 4 to 10 cub metres/MW for larger engines.

The area for marine use is usually dissolved in water having a concentration of 32%-40%. Urea is a non-toxic odourless solution considered safe to transport and store at ambient temperature & pressure. However special caution is required in winter temperatures in order to avoid crystallization.

The dosing handling system provides the reducing agent (urea solution) based on the dosing demand signal provided by the SCR and Engine control and monitoring system. 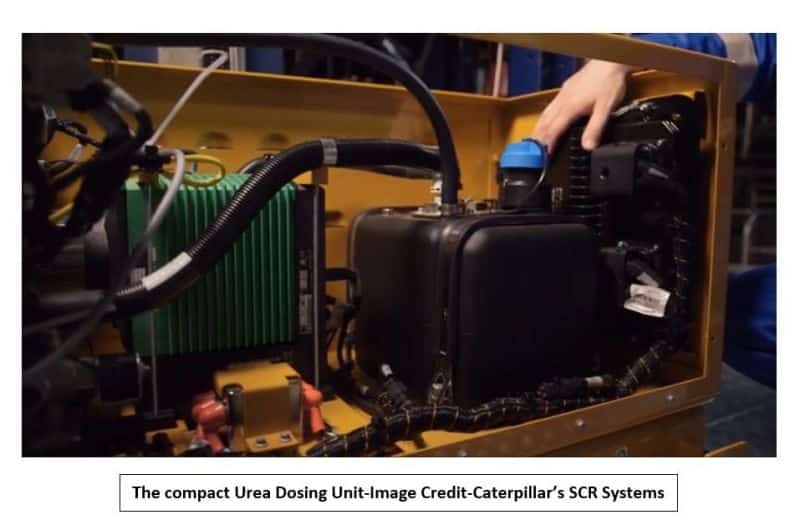 The urea from the dosing system is metered and injected into the vaporizer or mixing unit. The injected reducing agent (urea) will vaporise and mix with the incoming exhaust gas.

The mixing unit is in line with the exhaust manifold of the engine and its pipes are designed & constructed after complex flow calculations & intensive testing, to ensure a good mixture of the urea solution & hot exhaust gases. The mixing unit is usually 2 to 6 meters long and 500mm in diameter, however, size may vary as per Engine size. 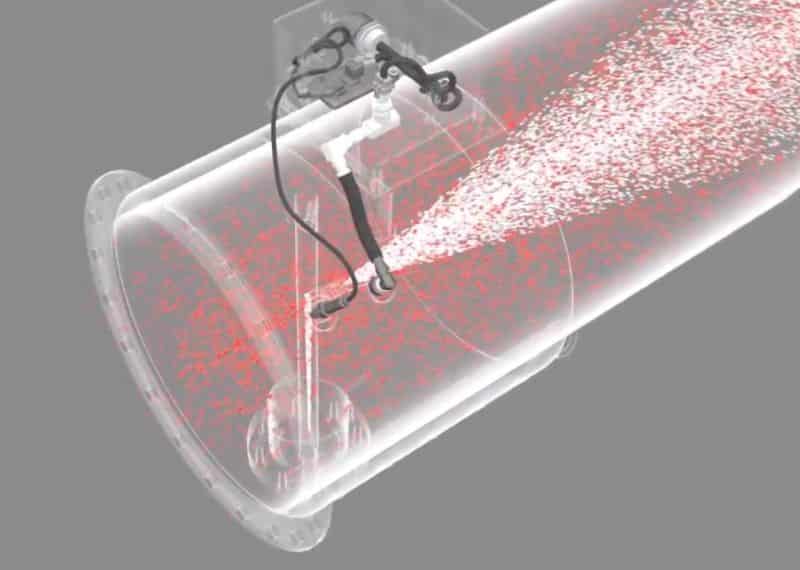 Injection tubes from the dosing unit penetrate the vaporizer from the bottom, the top of the vaporizer is equipped with an electronic enclosure having a NOx measurement sensor to monitor nitrous oxides in the exhaust gas and Backpressure sensor.

If the temperature is too low, SCR efficiency is reduced. Catalyst element contains Vanadium Pentoxide (V2O5) which helps the reaction process of converting the urea and exhaust gas into nitrogen and water vapour. The SCR reactor volume is usually 1.5-3 cub metres/MW installed power. 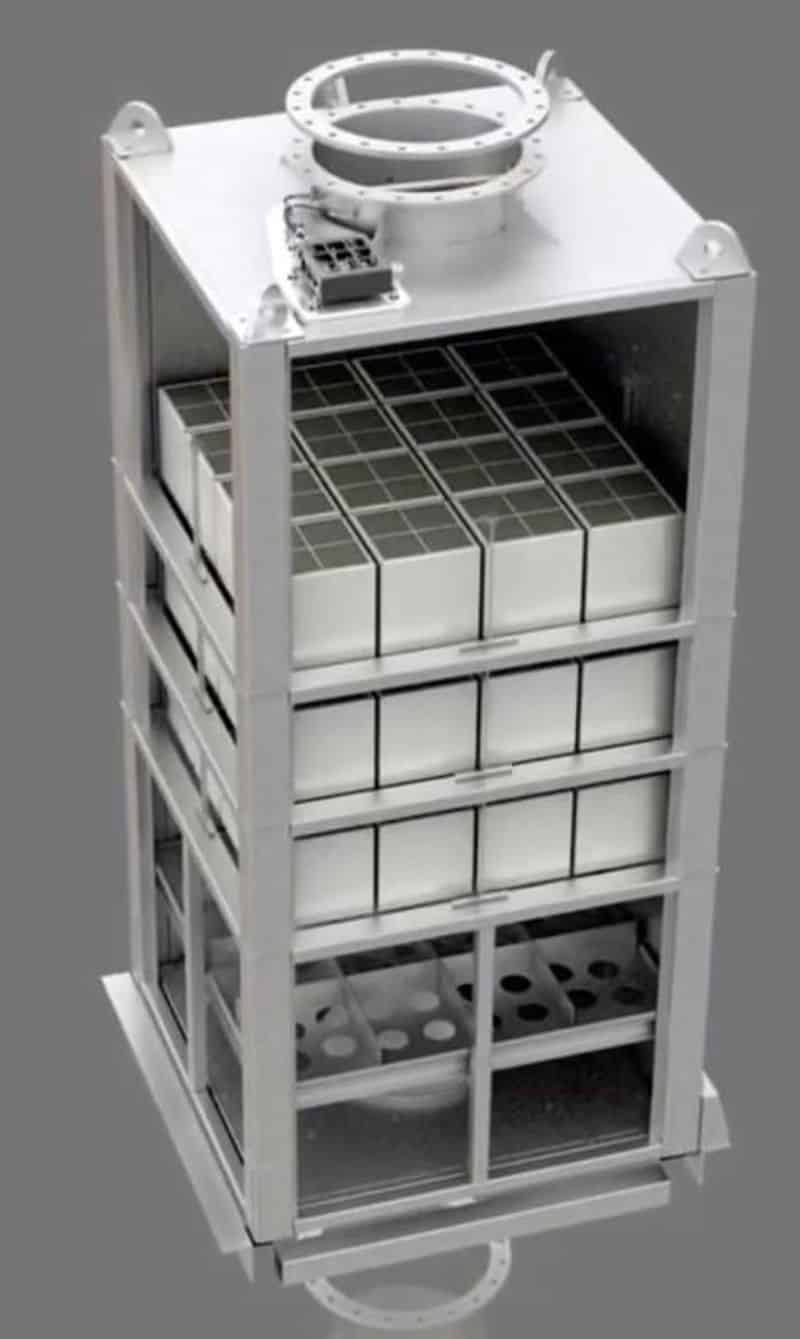 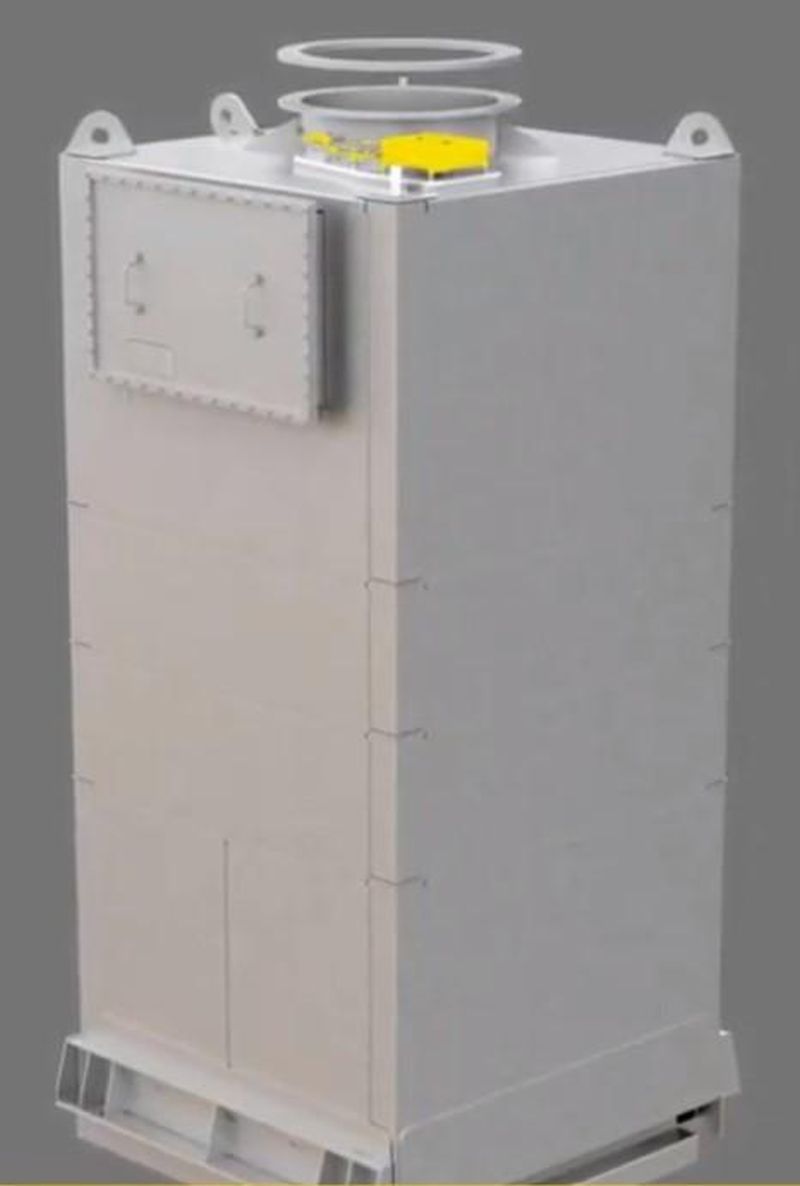 Condensation would severely affect NOx reduction performance and cause clogging, increasing backpressure due to soot formation in the reactor. 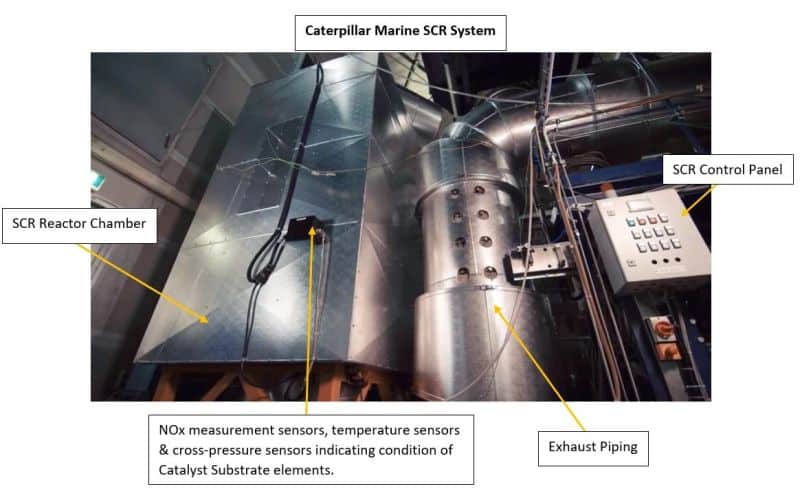 To prevent contamination of the reactor elements, a soot blowing system is installed. Soot blowing is done using compressed air of 7 bar. 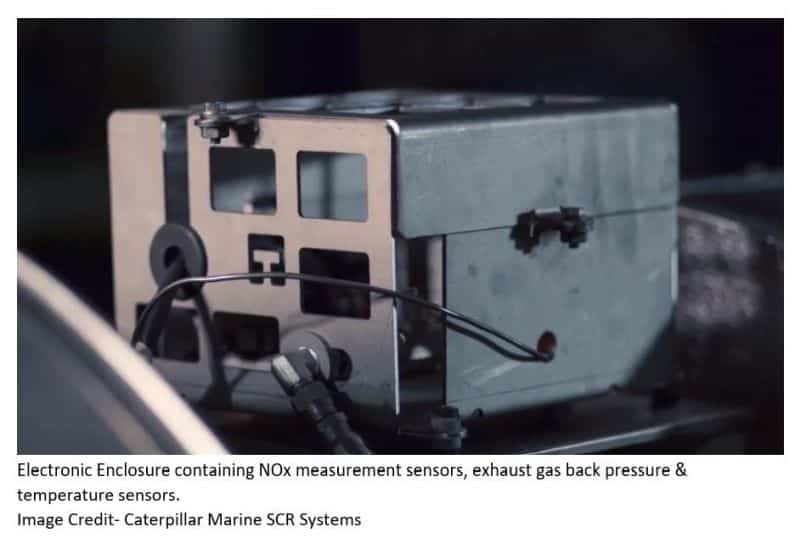 The venting system vents the SCR reactor when the SCR is bypassed (i.e. when the engine is running in Tier-II mode) to avoid exhaust gas accumulation and soot formation in the reactor. The reactor is vented with Fresh Air during Tier II operation.

The Reactor Sealing Valve is used to seal the reactor during venting when the SCR is not in use.

Reactor Throttling Valve is located at the outlet of the reactor.

Reactor Bypass Valve is used to bypass the reactor for NOx Tier II operation or failure of the SCR.

The Cylinder Bypass Valve can be used while the engine runs at partial loads to bypass scavenge air towards the turbocharger to increase exhaust gas temperature.

The Cut-In Cut-Out settings of Auxiliary blowers are set slightly differently in case of engines fitted with SCRs. While cutting-in of auxiliary blowers at the time of reducing load, a slight delay is introduced so as to avoid a sudden drop in exhaust temperature.

Similarly, while cutting-out the auxiliary blowers, when engine load increases, the exhaust temperature tends to increase suddenly, to prevent this- the Cylinder Bypass Valve (CBV) opens first to gradually increase temperature, then the blowers cut out and the CBV later closes as per engine load.

Pros & Cons Of The SCR

To assure continuous NOx removal and avoid clogging, special considerations have to be observed with regard to exhaust temperatures.

● Tier III NOx compliance is achievable.
● Very efficient NOx removal for most engine loads (60-90%)
● SCRs have a widely growing reference base with over 300 installations

● Rather investment intensive
● Limited NOx removal at low engine loads
● In comparison to other solutions for NOx Tier III emissions, the use of urea requires the installation of urea tanks which may have to be replenished often (a costly affair)
● Can result in excess consumption of fuel (about 1%)
● Additional cost of Urea in ECA areas. 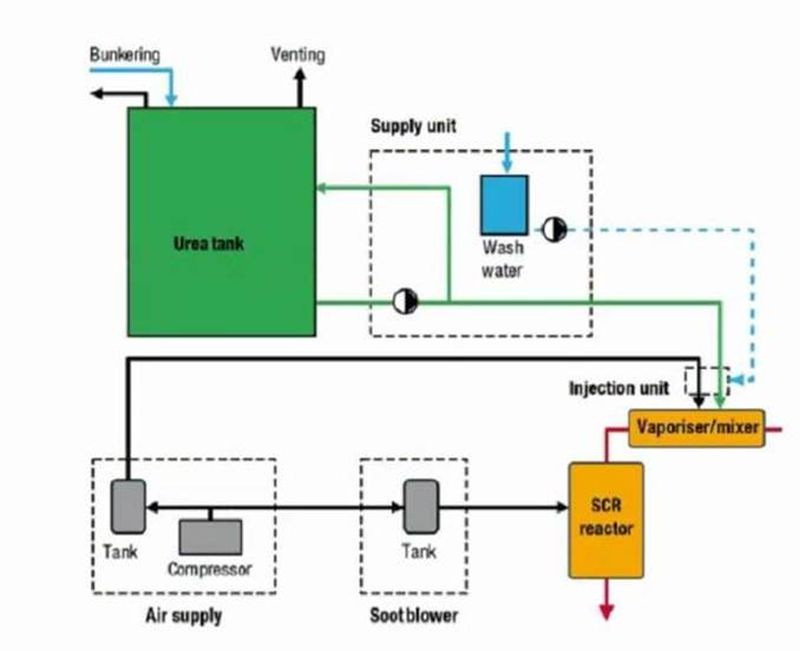 ● Replacing NOx sensors- sensor life is approx. 2000hours
● Replacing the substrate catalyst elements in the SCR reactor (Lifetime-approx. 1000hours)
The lifetime of the catalyst elements strongly depends upon the sulphur content of the fuel. For NOx Tier III compliance, NOx efficiency is to verified once a year.
If NOx efficiency reduction < 70% all catalyst elements must be renewed as per manufacturer’s instructions.
● The Soot Blower consists of a compressed air bottle, soot blower diaphragm valves and pressure switches. All pressure hoses are to be checked and diaphragm valves to be maintained.
● The Dosing Unit consists of a urea solution tank, liquid filters, dosing pumps, nozzle assemblies, flowmeters, valves and pressure switches.
Weekly maintenance includes cleaning of filters, monthly includes inspection of injectors. Proper inspection and working of all individual components are to be checked every 6 months.

Benefits For The Ship Owner/Operator

For example, the following reductions in harbour fees for operating on Tier III are given by these ports:

What is a Fishfinder and How Does it Work?

Anmol Mathur is a marine engineer working on Oil Tankers & Gas Carriers for K-Line. Fascinated by the latest cutting edge technology in the maritime industry, he loves reading and learning. Besides having a flair for writing, he is a foodie and loves swimming in his free time.