Different methods are employed for starting the marine diesel engines on board ships depending on the type and kind of the engine . Some of the most common forms of methods used on board ships are manual, electrical and mechanical systems.

In ship’s main propulsion or in auxiliary engines, considerable torque is required to overcome the inertia of large reciprocating masses. For this purpose, the energy stored in the compressed air is used.

Mentioned below are important points that marine engineers must be consider while operating starting air system of marine engines.

The starting air pressure should be such that it provides enough speed to the piston during its compression stroke for quickly compressing the charge air and reaching the required temperature to initiate combustion of the injected fuel. The starting air pressure is generally of the same range for both the main propulsion engines and the auxiliary engines i.e. between 25 and 42 bars. If the air pressure goes higher than this, then the components of the engine should be sturdy and robust to cater for the same.

2. The time period for the induction of starting air

For 4 stroke engines, the starting air valve begins to open 4 degrees before TDC and begins to close 130 degrees after TDC. 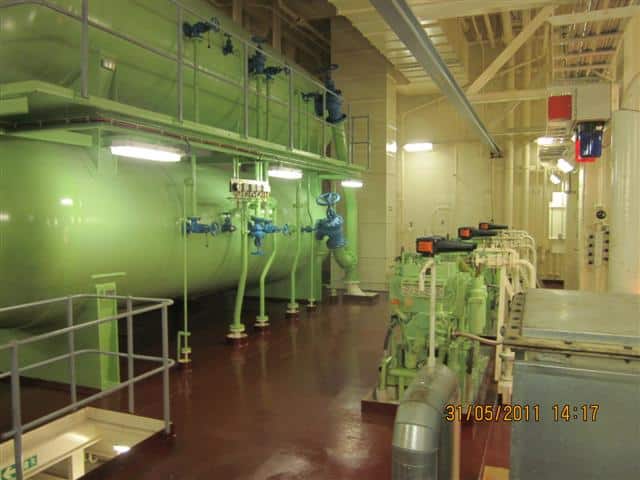 There should be a minimum overlap of 15 degrees provided and the ideal condition should be between 20 degrees and 90 degrees.

For a 4 cylinder 2 stroke engine the firing interval is 90 degrees (360/4) and if the starting air period is 115 degrees then the total overlap period would be the difference between the two, i.e. 115-90=25 degrees.

4. Indications of leaking starting air valves and the cause of their leakage

5. Running of engine with the leaking starting air valve

Thus, the reversing control can be operated and the engine can be given a small starting air in the reverse direction to obtain a different crank position or the turning gear could be engaged and one of the pistons shall be moved in position just after top dead centre to get the positive torque to turn the engine.

If during manoeuvring, the starting air is not inducted for 30 minutes, while the engine is on wheel house control, then there’s an automatic activation of the slow turning mode in which the engine is turned very slowly for at 8-10 rpm and the air is restricted by a slow turning valve. This is done as a precautionary measure to prevent damage to the engine while starting, if there were an oil or water leakage.

Interlocks are the blocking devices which ensure that the engine is started or reversed only when some conditions are fulfilled or satisfied. Running direction interlock is an essential trait that prevents the injection of fuel to the engine when the telegraph doesn’t synchronise with the running direction of the engine. It is an important application in the crash manoeuvring when the starting air is used to apply brakes on the engine by reversing the operation.

These are some of the most important points marine engineers must know about the air starting system on ships.

Do you know any other important points that can be added to this list? Let’s know in the comments below.