Unison has installed and commissioned the world’s largest and most powerful all-electric pipe bending machine, at the Norwegian offshore and maritime services company, Westcon Yard AS. Capable of generating a colossal 660,000 Nm of continuous, servo-controlled torque, the custom-designed machine will be used for precision bending of thick-walled carbon steel pipes up to 10 inches (273 mm) in diameter.

This is the second all-electric pipe bender that Unison has supplied to Westcon’s pipe production facilities in Ølensvåg, Norway. The first, a 90 mm single-stack model from Unison’s Breeze range, was installed at the beginning of 2015 and enabled the company to bring fabrication of all pipe sizes up to 60.3 mm in diameter in-house. It has also helped Westcon to simplify and accelerate its production process dramatically, by allowing parts to be fabricated from single-piece piping stock, instead of from multiple cut-to-length straight sections and pre-formed bend parts bought-in from external suppliers.

Westcon has similarly high expectations for its new 10-inch machine. The company now intends producing virtually all the pipe sizes that it needs for its outfitting, service and repair operations entirely in-house, without having to use pre-fabricated bend sections. 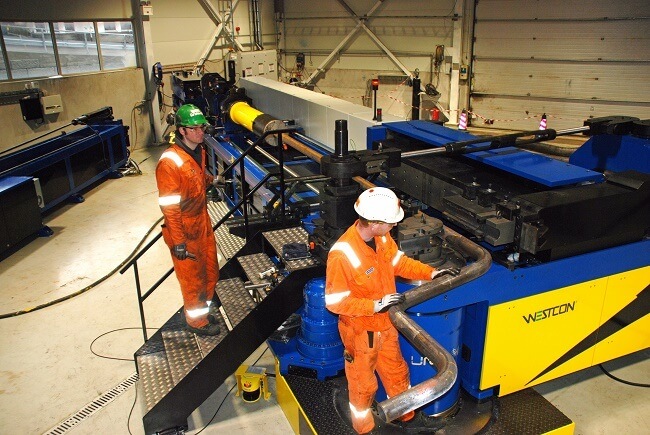 This application of all-electric bending technology to pipes up to 10 inches in diameter is without precedent. Although Unison’s bending machines are used by a number of the world’s leading ship and submarine builders to produce large pipe and tube assemblies, this is by far the most powerful that the company has ever designed and built. It highlights the inherent scalability of Unison’s machine architecture and underlying motion control technology – the company’s range of all-electric bending machines now extends all the way from 16 mm (5/8 inch) to 273 mm (10 inches).

The order for both pipe bending machines, which also called for Unison to supply CAD support software, was placed through P Meidell AS, the specialist machine tool company that acts as Unison’s representative in Norway.

Westcon specialises in building and repairing ships for the offshore and fishing sectors, and in servicing, maintaining and repairing semi-submersible and jack-up rigs used by the offshore oil and gas industries. It operates four shipyards in Norway, with its headquarters and pipe production operations forming part of a modern and well-equipped yard near Ølensvåg. This enjoys a unique sheltered position on the Ølensfjord with deepwater access to the North Sea. The yard’s facilities include two floating docks, deepwater quays for three drilling rigs and a number of high payload cranes.

In recent years, Westcon has invested heavily in its pipe fabrication operations for ship and rig outfitting, with the intention of becoming a world leader in this industry. The Ølensvåg site now has a large 3,650 square metre purpose-built engineering workshop, with more than 1,500 square metres allocated to pipe production. The new facilities include a fully automated materials handling system – based on 9-metre high pipe storage racks and robotic feeders – together with an automatic pipe cutting machine and the two Unison CNC-controlled all-electric tube benders.

Most of the pipes that Westcon produces are one-off items for new systems, rerouting and maintenance purposes. They are typically manufactured from carbon steel, with each pipe spool normally being up to 6 metres in length. The pipes usually form part of fresh or sea water systems, hydraulic systems, diesel fuel distribution networks or other special systems. They often involve very tight radius bends, to as little as 1.5 times outside diameter, and need to be constructed to millimetre accuracy.

Until about six months ago, Westcon fabricated all pipes in sectional form, using multiple cut-to-length straight sections and bought-in preformed bend parts. The individual sections, bends and end connection flanges were then welded together to create the final assembly – with each weld requiring cleaning, inspection and non-destructive X-ray testing. This was an expensive and time-consuming process that was also heavily reliant on outside suppliers meeting tight delivery schedules. Rapid turnaround time is critical for repair organisations like Westcon, where the out-of-service costs of ships and rigs can be astronomical.

Following delivery of its first Unison bending machine, Westcon has produced all pipes up to 60.3 mm in diameter in-house, from straight piping stock. This has eliminated the need to buy-in preformed bend parts for these pipe sizes, and reduced the number of cutting, welding and testing operations needed for each assembly substantially. The pipes are currently cut slightly over-length before bending, to allow for any changes introduced by the process. After bending, they are re-measured, cut to final length and welded to the necessary flanges. The company intends further improving the process by cutting the pipes to length prior to bending, as its expertise develops.

As Tommy Nilsen, Head of Prefabrication at Westcon’s Ølensvåg facility, explains, “We have only been using our first Unison machine extensively for a few months and are still on a learning curve. Despite this, we are already achieving superb bend accuracy and repeatability with good throughput – and we are confident of increasing this even further when we change the process sequence. In fact, based on our experience so far, now that the larger bending machine is in place, we expect to substantially reduce production times for all pipe sizes. It’s like going from 1930 to 2016 in one stride! We are now effectively a year ahead of the rest of the world in terms of our pipe fabrication capabilities.”

Unison all-electric pipe bending machines feature servomotor-driven motion axes and fully automated software-controlled setup. Simplicity of operation and the fact that Unison was prepared to develop custom pipe bending solutions were two of the key reasons behind Westcon’s original order. Both the 90 mm and the 273 mm machines are fitted with Unison’s innovative laser springback system, which automatically measures and adjusts bend angles to compensate for the tendency of tubular parts to spring back slightly after being bent. The machines also both feature quick-change tooling, which is a major advantage for applications that involve bespoke, one-off manufacturing.

The Unison machines’ unique mechanical design, combined with the precision axis control capabilities of Unison’s Unibend software – especially with respect to carriage and pressure die boost – makes it easier to achieve very accurate and repeatable results, with minimal changes to the wall thickness or ovality of the pipe that is being bent. These attributes are ideal for manufacturers of marine, offshore and subsea equipment, who invariably need to work to tight tolerances and strict process guidelines.

Alan Pickering of Unison underlines the significance of the Westcon application, “Our all-electric tube and pipe bending technology is starting to make major inroads into territory that was once regarded as the sole preserve of hydraulic benders. This has huge implications – and not just for marine vessel and offshore rig outfitting and repair organisations, though these are currently driving the take-up of our larger bending machines. Industries such as nuclear and fossil-fuel power generation, oil and gas refining, and chemical processing also make extensive use of large diameter precision-bent pipes. Accurate and repeatable bending – especially if it involves expensive corrosion resistant alloys – are as important to these industries as any other. Last year, the largest machine that we produced was capable of bending 9-inch diameter tubes and pipes. This year it’s 10 inches. We are now entering the domain of process pipe-work, which is an entirely new market.”

Bjørn Garvik, Sales Manager at the Bergen office of P. Meidell AS, Unison’s sales support partner in Norway, adds that the machine tool market in Nordic countries offers significant growth potential. “Norway, Finland, Sweden and Denmark all have major shipbuilding interests, which nowadays have to compete with lower labour cost manufacturers in Asia. Automation like Unison’s all-electric tube and pipe bending machines can help companies to meet the challenge of these competitive trading conditions, by significantly improving the efficiency of their production operations.”