When Britain’s most famous ocean liner was still a dream, the Cunard Lines recruited the John Brown shipyard in Scotland to build what would become the world’s most famous ocean liner. When Britain’s certified LEGO builders, Bright Bricks Inc. decided to commemorate the ship in LEGO Bricks – they never dreamed the huge model would someday come to Long Beach and be displayed on the actual Queen Mary. “The agreement to display our model on the ship is the perfect end to a wonderful LEGO adventure,” said Bright Bricks co-founder, Ed Diment.

The LEGO company certifies only a few official model makers; Bright Bricks is located in England and is a well-established creative resource. “Companies from around the world hire us to interpret their products or brand using LEGO bricks. But, in this case, we decided to build the Queen Mary for our own satisfaction. It required four professional builders and over 250,000 individual LEGO bricks. It took almost four months to complete the project,” Diment added. 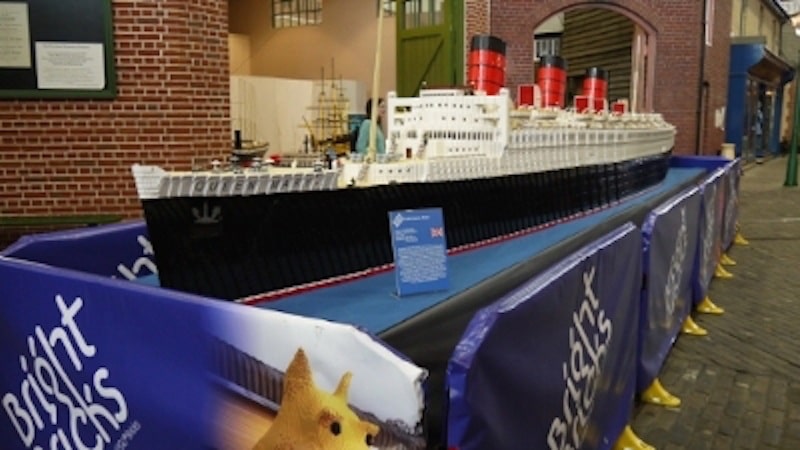 To better connect children and others with the historical persona of the Queen Mary, the decision was made to display the model in an exclusive space – The Shipyard – and to surround it with Bright Brick building stations where children and LEGO-enthusiasts can make their own version of the ship or anything else that comes to mind. The model room will feature 4 building tables and will be supervised by Queen Mary staff.

Over the past two years the Queen Mary has attracted close to 4 million visitors. With the world’s largest LEGO brick ship model’s arrival a new visitor category will become part of the Queen Mary’s ongoing success by adding a family and child-friendly element to an already robust historical narrative. Adults and children are likely to be overwhelmed by the sheer size and accuracy of the brick model.

The Bright Bricks (www.brightbricks.com) model of the Queen Mary begins its exhibition July 4, 2015. The Shipyard features historical photography of children at play while sailing as passengers; archival photos of the Queen Mary’s construction, antique tools and other items that capture the idea of building the world’s greatest passenger ship complete the decor.

“I can’t wait to see the look on the faces of the children who come to the exhibit and are confronted by this magnificent LEGO brick model. And for those tall enough; some children might notice a tiny top-hatted mini-figure of Sir Winston walking the upper deck,” said Queen Mary General Manager John Jenkins.

About Bright Bricks
Bright Bricks is a professional LEGO building company based in Hampshire in the UK. It is home to Duncan Titmarsh, the UK’s only LEGO Certified Professional, and one of only 16 in the World, and his business partner Ed Diment who built the LEGO Queen Mary Model. Bright Bricks builds large commission models for clients all over the World as well as making custom LEGO sets, attending corporate events, making gifts and running children’s parties with LEGO bricks. Basically if it involves LEGO we do it!

About the Queen Mary
Located in the Port of Long Beach, the Queen Mary (www.queenmary.com) features a rich maritime history, authentic Art Deco decor, and stunning views of the Pacific Ocean and Long Beach city skyline. At the time of her maiden voyage in May of 1936, she was considered the grandest ocean liner ever built. The Queen Mary features award-winning restaurants, historical attractions, numerous special event salons and 346 staterooms.