Newly commissioned Littoral Combat Ship USS Little Rock (LCS-9) is stuck indefinitely in Montreal due to extreme winter weather and an icy St. Lawrence River, and the Navy denies rumors the ship is sidelined with an engineering casualty. The ship’s crew did make repairs to cables that run under the hull upon arriving in Montreal, but the weather is solely responsible for the warship being stuck in port in Canada until the ice melts, officials told USNI News on Tuesday. 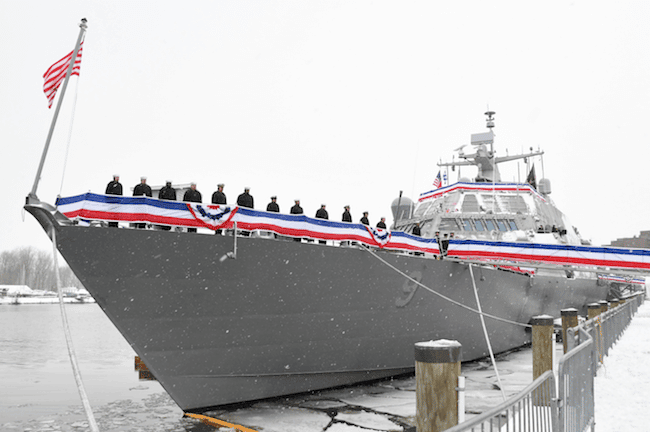 U.S. Surface Force Atlantic spokeswoman Lt. Cmdr. Courtney Hillson told USNI News that Little Rock departed Buffalo, N.Y., later than expected after its Dec. 16 commissioning ceremony due to extreme weather conditions. The ship had a scheduled port call in Montreal over the holidays, but while transiting the icy St. Lawrence River to Montreal the ship saw damage to feedback cables that “did not impact the ability of the ship to transit the seaway.”

The damaged feedback cables connect the bridge and the steerable water jets. They do not send commands from the bridge to the waterjets, but rather they send feedback information to the bridge to tell operators that the waterjets did follow the commands given. The cables run underneath the hull, and Hillson said that “root cause of the failure is currently unknown, but based on components being frozen and iced over, it is likely that ice was a contributing factor.”

Repairs to these cables were completed on Jan. 4, and Hillson said “the ship was ready to depart Montreal, but the extreme cold, subsequent condition of the St. Lawrence Seaway and availability of icebreakers and support ships caused the delay.” 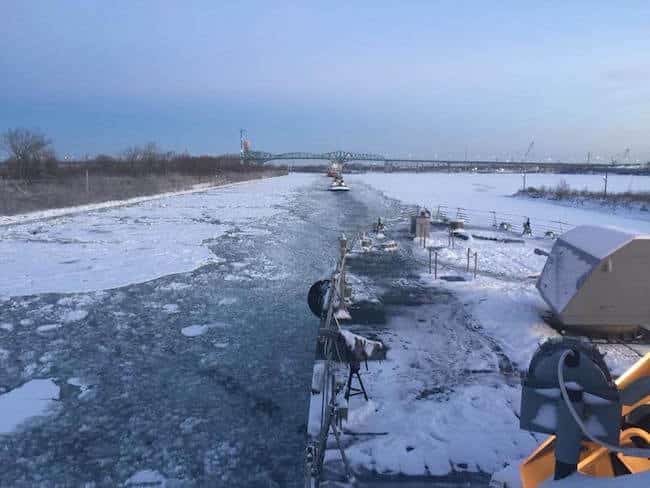 USNI News understands that many commercial ships became completely stuck as the river froze over in abnormally cold weather. Canadian officials prioritized their icebreaking tugs for freeing commercial vessels, and the U.S. Navy now must wait to move Little Rock until the waterways become safe for passage again – which could potentially happen in March, based on the typical weather in the region. Photos on a USS Little Rock Facebook page show the warship following tugs during its transit into Montreal, with a narrow strip of the river being passable and the rest frozen.

“Because of their extended port visit due to the weather and icy conditions, underway testing and assessments will be adjusted and re-scheduled,” she told USNI News.
“The sailors are mission-oriented and continue to focus on readiness, training and certifications while they remain in port Montreal. Specific to training, USS Little Rock sailors are conducting training to maintain proficiency in areas such as medical, damage control, navigation and security.”

Hillson added the crew would also partake in partnership-building and volunteer activities in the region.

Once the ship is finally able to leave Montreal, it will resume its voyage to its new homeport in Mayport, Fla.