U.S. Coast Guard Cutter Healy, homeported in Seattle, arrived at the North Pole Sept. 5, 2015, becoming the first U.S. surface ship to do so unaccompanied. This is also only the fourth time a U.S. surface vessel has ever reached the North Pole, and the first since 2005.

Healy’s crew and science party, totaling 145 people, departed Dutch Harbor, Alaska Aug. 9, in support of GEOTRACES, an historic, international effort to study the geochemistry of the world’s oceans. This National Science Foundation funded expedition is focused on studying the Arctic Ocean to meet a number of scientific goals, including the creation of baseline measurements of the air, ice, snow, seawater, meltwater and ocean bottom sediment for future comparisons. 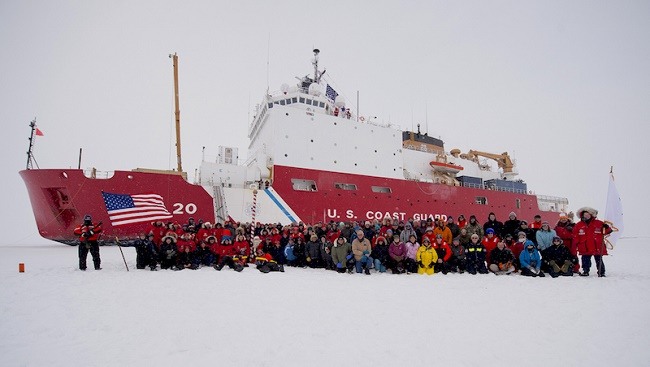 The United States is an Arctic Nation and the Coast Guard has operated in the Arctic since the 1860s. Reaching the North Pole serves as a testament to the Coast Guard’s continued ability to provide access and presence throughout this increasingly important and operationally challenging region of the world.

Healy is the United States’ newest high-latitude vessel. It is a 420-foot, 16,000-ton, 30,000-horsepower icebreaker, capable of breaking over ten feet of ice. In addition to performing the Coast Guard’s other statutory missions such as law enforcement and search and rescue, Healy is a research platform with extensive laboratory spaces, multiple oceanographic deck winches, and berthing for 50 scientists.

As the Arctic region continues to open up to development, the data gathered onboard Healy during this cruise will become ever more essential to understanding how the scientific processes of the Arctic work, and how to most responsibly exercise stewardship over the region.