In January, the two foundations (one having a height of 35m with the second being 40m high) for the Kriegers Flak Offshore Substations left the port of Ostend, Belgium with destination Koege in Denmark. The foundations were constructed directly on to the semi-submersible barge “Boabarge 37”. In Koege, the foundations will await the arrival of the Heavy Lift Vessel “Rambiz” and a suitable weather window, before the float off and installation on Kriegers Flak can take place. 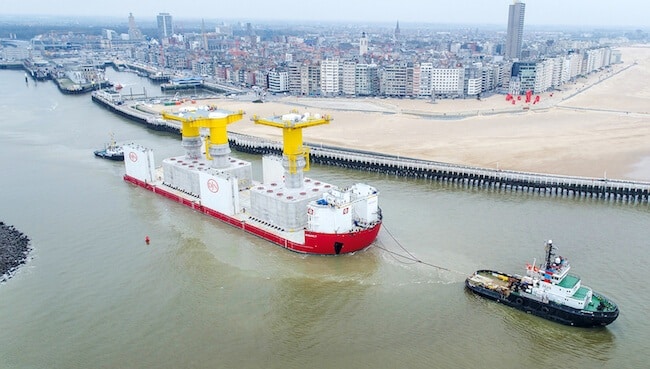 The foundations, weighing 8.000 and 10.000 tons respectively will accumulate electricity, from the 72 turbines, to be sent to Denmark and Germany for supplying electricity to around 600,000 homes.

To ensure safe berthing at Koege, the barge will be manoeuvred by the lead tug “Zeus of Finland” and a local assisting tug, coordinated by two pilots with local knowledge.

“We are very proud to have been appointed agents for Jan De Nul Group for the services related to the Kriegers Flak Project, and we are looking forward to receiving the two large foundations here in the port of Koege. It will be an impressive sight which will surely create some talk in town”, says Nicolai Keller from Blue Water’s agency department in Copenhagen who is in charge of this project.

In addition to coordinating the port call with the port and tug boats, Blue Water will assist with ad hoc services that may be required during the stay in Koege.

Kriegers Flak Offshore Wind Farm is owned by Vattenfall and will consist of 72 pcs Siemens Gamesa 8 MW turbines. The wind farm is expected to be fully operational in 2022.