Tallink’s new LNG fast ferry delivered in 2017 will be named Megastar. The name was chosen among 21 550 name proposals submitted to the public name contest. On 9th of February 2016 the keel for Megastar will be laid in Meyer Turku Yard, which starts the constructions of the ship in dry-dock.

According to the Chairman of the Board of AS Tallink Grupp, Mr. Janek Stalmeister the name enables to maintain the unity among the names in the Tallink Shuttle fast ferry family.“ As Megastar will be among the largest of her kind in the world, this name expresses perfectly the characteristics of the ship. It is also easy to pronounce in Estonian, Finnish and other languages. As there were so numerous entries with that name, we also see it as the wish of many of our passengers“, said Stalmeister. 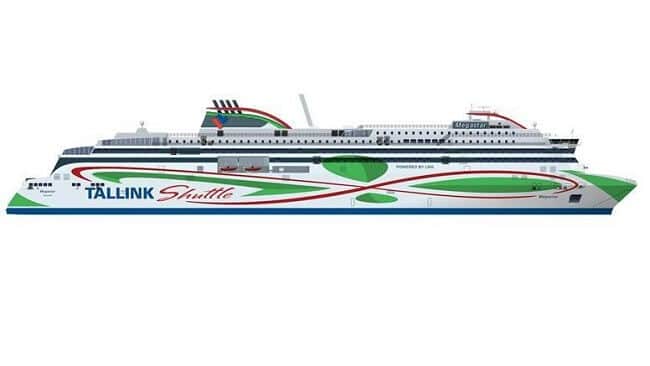 The first one to enter the name Megastar into the competition was Janar from Estonia, who will receive the prize of two tickets for the ship`s very first official trip. Altogether, over 300 entries with the name Megastar were registered in the contest, making it one of the most popular names suggested. Altogether there were 14 200 entries from Finland, 5300 entries from Estonia and 2050 entries through the international website.

The production of the new LNG powered fast ferry started in Meyer Turku Yard in Finland on 4th of August 2015, on 9th of February 2016 the keel of Megastar will be laid.

The price of the ship is 230 million Euros and it is planned to be delivered in the beginning of 2017.

Megastar will be 212 meters long, can accommodate altogether 2800 passengers and will start operating on Tallinn-Helsinki route.

The new environmentally friendly ship uses LNG as fuel and she will comply with the new and stricter emission regulations for the ECA areas including the Baltic Sea. The ship, with a gross tonnage of 49 000 and service speed of 27 knots, will bring significant improvement in energy efficiency. The highly innovative hull form minimizes the flow resistance and ensures that the ship operates well in ice conditions. Efficient and fast cargo turnaround in ports has been taken into account in the design of the new generation fast ferry.

AS Tallink Grupp is the leading passenger and cargo transportation service provider in the Northern region of the Baltic Sea. The company owns altogether 17 vessels and operates under the brands of Tallink and Silja Line on 6 different routes. AS Tallink Grupp employs 7000 people and has annually up to 9 million passengers worldwide.

Meyer Turku Oy is one of the leading European shipbuilding companies owned by Meyer Werft (70 %) and Finnish State through Teollisuussijoitus (30 %). The company’s shipyard in Turku employs 1,350 people and specializes in building cruise ships, car-passenger ferries and special vessels. The subsidiaries of Meyer Turku are Piikkio Works Oy, which is a Cabin Factory in Piikkiö, Shipbuilding Completion Oy, which provides turnkey solutions to public spaces in ships, and ENG´nD Oy, which is an engineering company offering services for shipbuilding and offshore.