Moira Taylor exhibits her wide-ranging historical research in engaging prose as she delves into the extraordinary lives of some of her ancestors, who were one of the earlier families to settle in New Zealand.

Drawing on a remarkable collection of family material, augmented by other sources, Sailors, Settlers & Sinners also reveals Britain’s maritime history during the age of sail, as voyages move from Hull to Hamburg, the Baltic, Mediterranean and Russia; from Liverpool to North and South America; from London to India, Australia and New Zealand. 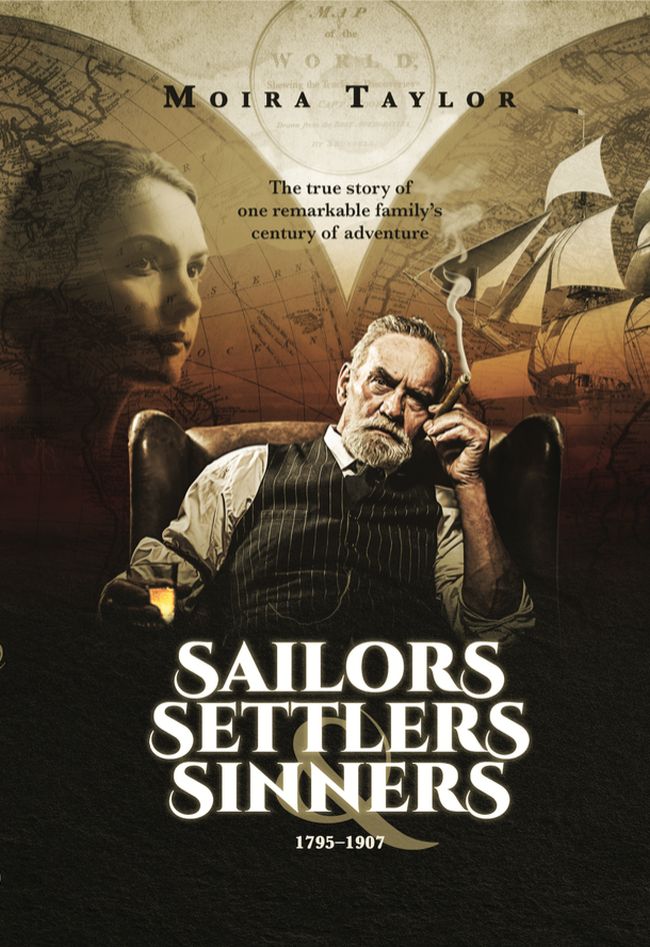 Beginning in the port of Hull in East Yorkshire during the French Revolution, Moira traces the life of George Hall, a mariner captured during the Napoleonic Wars in France, his six years of captivity and his daring escape, as well as the maritime careers of his two sons, George and Thomas, when Britain was expanding as a maritime and colonial power. Drawn into their tale of human enterprise in the face of heart-breaking and devastating set-backs, this impeccably detailed and beautifully written account is proof of courage and determination as a route to worthwhile achievements.

Packed with intricate and telling detail, and lavishly illustrated with nearly 100 illustrations (including early daguerreotypes, paintings, photos, maps and maritime documents), Sailors, Settlers & Sinners will appeal to anyone interested in family, maritime and colonial history.

“Moira Taylor’s meticulous research has uncovered a remarkable tale about the lives of her ancestors that at time will leave you gasping in disbelief.” – 5 Star review Amazon.co.uk. 2019, UK

“Sailors, Settlers & Sinners will be a valuable contribution adding another layer to the history of New Zealand.” – 5 Star review Amazon.co.uk. 2019, USA.

A reminder of how true life can be more extraordinary than fiction. Available on Amazon.co.uk