Rolls-Royce has secured a landmark agreement to supply six of its new B33:45 medium-speed diesel generator sets to China’s Fuijan Mawei shipyard for configuration aboard the world’s first ever seabed mining vessel.

When the 227 metre long, 40 metre wide mining ship is delivered towards the end of 2017, it will operate under long-term charter to Nautilus Minerals at the Solwara 1 project in the Bismarck Sea, offshore Papua New Guinea. The vessel will be used to extract high grade copper, gold, silver and ore from the seabed in water depths of 1,600 metres. 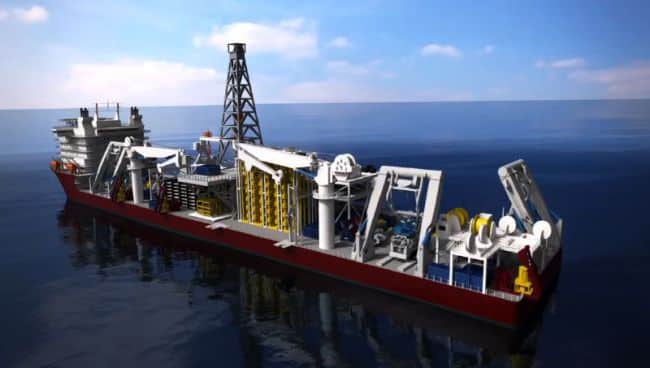 Mark Reeves, Marine Assets Corporation, Chief Operating Officer, said: “this is very exciting to be building a ‘world’s first’ again, and we have a long history of using Rolls-Royce power and propulsion equipment, so we know the vessel will perform well.

“Since becoming involved in this project it is apparent that there is huge potential in subsea mining. Nautilus is the market leader in this segment and I believe Solwara 1 is the first project that has actually come off the drawing board. Site surveys and sampling has proven that the subsea mining sector can be extremely lucrative compared to land mining, with mineral content per tonne of ore considerably higher than land based mines.”

John Knudsen, Rolls-Royce, President – Commercial Marine, said: “This contract is a major step forward in the development of our new family of medium-speed engines designed to suit a wide range of ship types. We are very proud that the B33:45 generator sets have been selected to power this pioneering ship, which will be at the forefront of a whole new chapter in underwater exploration.

“Deep sea mining is an exciting new industry, and with our extensive pedigree in the offshore business, we look forward to working with Marine Assets Corporation and their partners in enabling them to become first movers in the extraction of valuable minerals from the seabed.”

“This order underlines a long and prosperous co-operation between Rolls-Royce, Fujian Mawei and MAC, who previously ordered five semi-submersible accommodation units and two accommodation vessels, all equipped with Rolls-Royce engines and propulsion”.

The contract marks the first multiple order for the B33:45 engine since its official market introduction in September last year. Each engine will also feature Tier III-compliant selective catalyst reduction technology. The B33:45 engines offer a 20% increase in power per cylinder, while fuel consumption, emissions and through-life operating costs are reduced.