It will be the biggest thing ever sent to sea – but as the Prelude FLNG vessel was launched on Tuesday, plans were already under way for something bigger. With a bow and stern half a kilometre apart, four football pitches would fit on Prelude’s deck were it not for a clutter of kit towering up to 93 metres high that will draw gas from under the sea bed for dispatch to Asia by the boatload.

Now, as the partly-built structure floats out of dry dock for the first time, developer Royal Dutch Shell wants to consolidate its advantage as the first mover in Floating Liquefied Natural Gas (FLNG) – an as-yet untried technology for which Prelude will be the flagship.

The oil company’s technicians are designing something even larger and tougher than Prelude, a vessel that will need to last 25 years moored in the Indian Ocean’s “cyclone alley” off Australia’s northwest coast, producing enough gas to supply a city the size of Hong Kong. 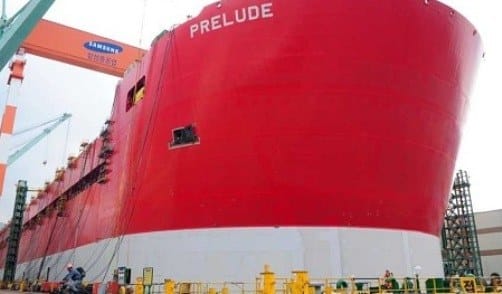 “Yes we will move bigger and move into more extreme environments,” Bruce Steenson, Shell’s general manager of integrated gas programmes and innovation told Reuters last week. “We are designing a larger facility … That will be the next car off the rails.”

Prelude, which analysts says may cost over $12 billion to build and which is due to be producing by 2017, is a potential game changer for the oil and gas industry.

If it is an economic success, gas fields worldwide that are too far out to sea and too small to develop any other way could become viable for LNG production.

Making the first-ever FLNG unit even more of a focus as it takes shape in Samsung Heavy Industries’ Geoje shipyard in South Korea, the prototype vessel’s most likely first copy model of similar size will now be for the Browse project – another venture for gas off Australia.

“DESIGN ONE, BUILD MANY”

Escalating costs forced backers to dump their original, land-based LNG plant plans, and in September this year, they decided to go ahead with Shell’s FLNG technology instead.

“The Browse structure will be 90 percent the same as Prelude,” Steenson told Reuters on the sidelines of a conference, citing the “design one, build many” mantra Shell hopes will eventually pay off and placate shareholders worried about the firm’s total $45 billion-a-year capital spending bill.

Browse’s developer, Woodside Petroleum, said in October it may use as many as three of the FLNG vessels Shell is developing along with Samsung Heavy and oil and gas engineers Technip.

An even bigger FLNG plant than the ones to be built for Prelude and Browse could make life more interesting for the competition – a wide range of land-based “wannabe” LNG exporters in Canada, Russia and east Africa, all hoping to tap burgeoning Asian gas demand the same way a number of Australian and U.S-based LNG developments will over the coming few years.

Anchored about 200 km (125 miles) off the Australian coast, Prelude will chill the gas to reduce its volume by a factor of 600 and load it on to specialised LNG tankers.

Prelude will only produce about 3.6 million tonnes a year (mtpa) of LNG along with its 5.3 mtpa of liquids and other hydrocarbons – a fraction of some land-based LNG plants.

Steenson envisages a bigger version could produce far more – giving it economies of scale closer to those to be enjoyed by bigger land-based producing plants such as Gorgon, a 15.6 mtpa plant taking shape on northwest Australia’s coast to tap offshore gas.

Gorgon, led by Shell’s U.S.-based rival Chevron, should be producing in early 2015, well ahead of Prelude, but it is way over budget and now scheduled to cost $52 billion against an original $37 billion. Plans for a land-based Browse plant were cancelled this year as its likely cost reached $45 billion, and as the outlook for global gas demand faltered.

Shell has shied away from offering estimates of Prelude’s likely cost, but analysts say FLNG could end up less expensive. They have put the cost of Prelude at $10.8-$12.6 billion.

At 600,000 tonnes with its storage tanks full, Prelude will be vast, but it takes up just a quarter of the space a land-based LNG plant of a similar capacity would occupy because components are stacked on top of each other.

LNG plants need access to the ocean anyway so that LNG tankers can load. FLNG eliminates the need for land purchase and reduces environmental objections. With cooling water straight from the ocean and gas tipped piped straight into LNG tankers, there is no need for long seabed pipelines and jetty construction.

Shell’s earliest FLNG designs were made in the 1990s but ended up shelved because of economic recession and technical difficulties. Shell started looking again at the idea in the early 2000s, but it was the discovery of the Prelude field in 2007 – too small and too remote to develop any other way – that gave the technology its first shot in the real world.

A final investment decision was taken to go ahead with 488-metre long Prelude in 2011. Its keel was laid in May this year and two giant sections of its hull built on opposite sides of the harbour were joined together in the summer at Geoje Island.

As was the case with the pioneering design, the bigger FLNG vessel design awaits a suitable gas discovery to match it, Steenson said at the London Business School’s annual global energy summit.