Two days before arriving in port, the Master received cargo documents from the shipper, which included an 11-page material safety data sheet (MSDS) on zinc concentrate. On receipt of the documents a safety meeting was held with the crew to discuss the cargo risks.

During the meeting, particular attention was paid to the use of personal protective equipment (full-vision goggles and respiratory particle filters) to protect against exposure to dust during loading. Although oxidation of the zinc concentrate, and thus its ability to reduce the oxygen content of a confined space, was indicated as a risk on the MSDS documentation, this risk was apparently not discussed during the safety meeting.

Loading commenced on arrival. The dust created during loading covered the ship’s deck and also found its way into the accommodation. A number of crew members experienced irritated airways and burning eyes as a result. The loading took less than a day and once completed the accommodation was cleaned of dust and the vessel left port. 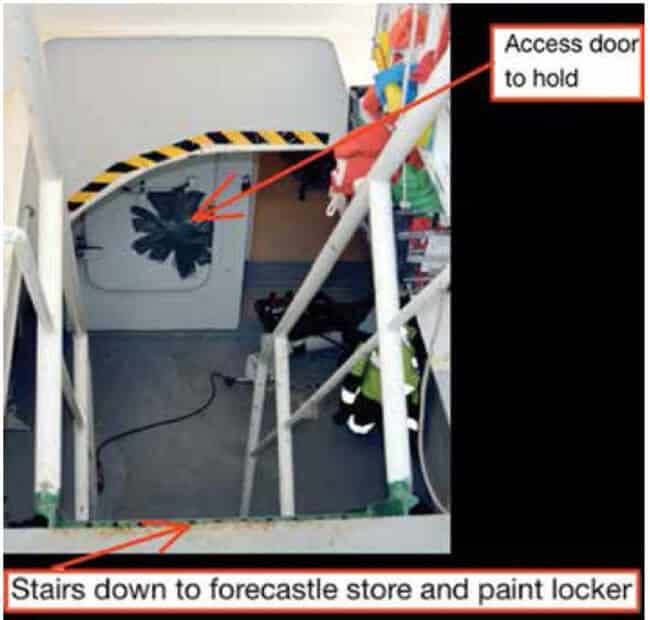 Five days into the voyage, the first mate intended to inspect the cargo via the access in the forecastle. As he walked past the paint locker he informed the seaman working there that he was going into the hold; he was carrying a breathing mask and a filter. He descended into the hold via an access door, closing the door behind him. Not long afterwards, the seaman opened the door and asked if everything was OK. The first mate responded in the affirmative so the seaman closed the door and went for coffee. The seaman mentioned this to an officer while on their break and the officer decided to take a look. On opening the access door to the hold, the officer saw that the first mate was unconscious, about three metres from the door.

Suspecting a confined space incident, he rushed to get assistance. Two crew members equipped with breathing apparatus went into the hold while others outside assisted with a rope. With some difficulty they managed to evacuate the first mate, but he could not be resuscitated. It was later established that he had died of asphyxiation. Measurements performed the day after the accident showed that the level of oxygen in the air at the stairwell was 2.6%.