Carnival plc marked the beginning of construction of Princess Cruises’ third new generation of ships with the official keel laying ceremony at the Fincantieri shipyard in Monfalcone, Italy. As the keel – the bottommost part of the ship – was ceremoniously lowered into position, and shipyard officials celebrated the occasion with a traditional Chinese lion dance. This, yet to be named ship, will be customized to appeal to the China market when it debuts in summer 2017.

Following the lion dance and a traditional blessing by a priest, the ship’s keel – which weighs approximately 500 tons – was moved into position by crane onto the keel blocks. The computer-guided maneuver took only minutes, belying the more than two million man-hours that will ultimately go into building the vessel. The 3,600-passenger, 141,000-ton ship will remain in the building dock until float out next summer.

“We’re incredibly excited to mark this step in the ship’s construction,” said Anthony Kaufman, Princess Cruises senior vice president of Asia operations, who traveled to Italy for the ceremony. “We’re very pleased to be working with our long-term partner, Fincantieri, on our newest ship and we appreciate their partnership and collaboration to customize and tailor the ship for the Chinese market.” 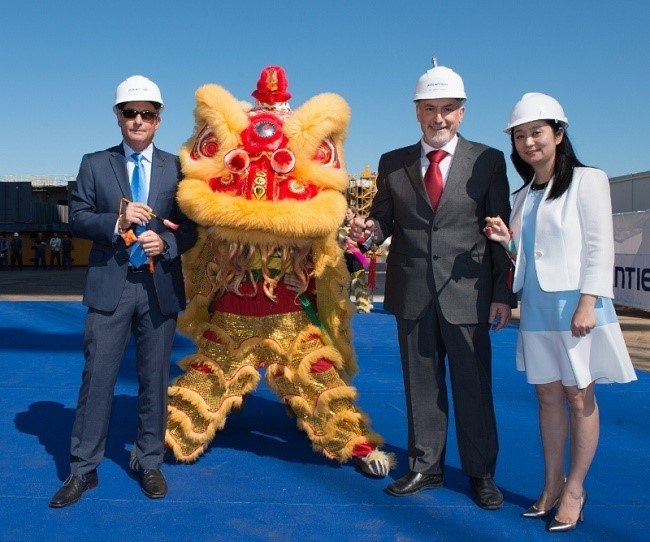 “The lion dance has been part of the Chinese culture for thousands of years and is performed on various auspicious occasions and celebrations. According to traditional Chinese belief, the lion signifies courage, wisdom, and good fortune and brings happiness, longevity, and good luck. We believe this special ceremony will bring prosperity and good fortune to Princess Cruises and our guests in China,” said Cherry Wang, country director of Carnival China, who also traveled to Italy for the ceremony.

The new Royal Class ship will offer many of the same special features as Royal Princess and Regal Princess,which have been so well-received by the industry. These include a dramatic multi-story atrium serving as the social hub of the ship; an over-the-ocean SeaWalk, a top-deck glass-bottomed walkway extending 28 feet beyond the edge of the ship; the Princess Live! interactive studio; a special Chef’s Table Lumiere, a private dining experience that surrounds diners in a curtain of light.

Guests will enjoy the international flavor of cruising with Princess, including experiencing cuisines from China, Japan, South-East Asia, Italy, France, and North America among other regions; as well as an array of international festivals re-created to celebrate cultures around the world; Princess Watercolor Fantasy, a fountain and music show; Movies Under the Stars featuring the largest outdoor screen at sea; and balconies on all outside staterooms. Accommodations will be configured to appeal to families and multi-generational travelers.

Additional details about the new ship’s features and deployment schedule will be announced over the coming months.