In the Caland Canal and the Botlek, the Port of Rotterdam Authority is working hard on the expansion and replacement of buoy berths and dolphin configurations so that they can become operational in the autumn. The buoys and dolphins in the port of Rotterdam reinforce the existing clusters in both liquid and dry bulk and are being used more and more. In the first half of 2015, transhipment at buoys and dolphins rose by 21% from 8.3 million tonnes to 10.1 million tonnes compared to the same period of 2014. The increase was related mainly to the transhipment of fuel oil. 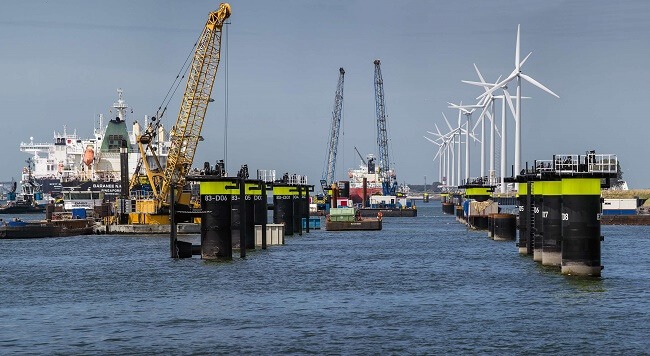 A year ago, dolphins 90 and 91 were positioned in Maasvlakte’s inland lake. These dolphins have been used intensively since then. At the dolphin configuration – basically two sets of eight dolphins – vessels with a length of between 225 and 350 metres can moor. The maximum depth of the water is 23.65 metres NAP (New Amsterdam Water Level). Fuels and other liquid cargo, as well as dry goods such as coal and grains, can be transhipped here.

In the 1980s, the Port Authority managed 260 buoys. Next year, when all the buoys have been replaced, the port will only have 29. The new mooring buoys have four eyes instead of one. Linesmen are used to pulling the hawsers through the eye of the buoy and securing them to it. This creates a ball of rope around that one eye, which can only be released with the aid of a machete. The new mooring buoy now provides a separate eye for every hawser. That makes the process of securing and releasing vessels quick and efficient. The so-called ‘holding power’ of the buoy is also improved.