The magnificent new Norwegian Escape – Norwegian’s largest ship and the first in its Breakaway Plus Class – was christened today in a stunning ceremony worthy of her size and status.

International music sensation Pitbull, who also served as GODFATHER for Norwegian Escape, thrilled fans and VIPs alike at the PortMiami pier side concert. The ship’s breathtaking hull artwork, created by Guy Harvey, who made a special guest appearance, served as the backdrop for the epic event.

Norwegian Cruise Line Holdings chief executive officer Frank Del Rio kicked off the festivities, where guests experienced an afternoon packed with fun and excitement in celebration of Norwegian Escape. Following a surprise opening act which featured acrobatic Parkour performers defying gravity (with the help of hidden trampolines built into the stage), national radio personality Froggy from the “Elvis Duran Morning Show” took the reins as event emcee, engaging the audience and introducing performers and special VIP guests, including Miami-Dade County Mayor Carlos Gimenez who discussed the positive impact Norwegian Escape will have on the local community, its residents and the economy. 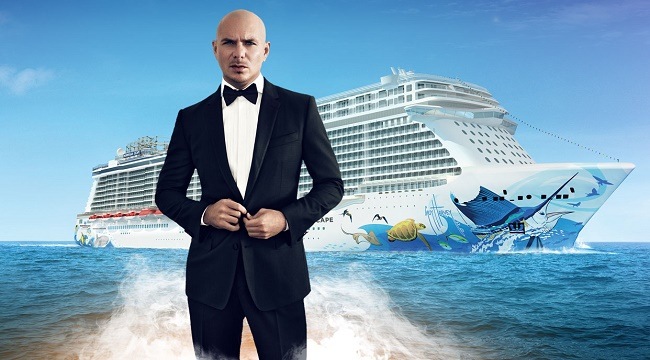 Attendees were treated to a special sneak peak at the stellar entertainment Norwegian Escape has to offer as the casts of Tony Award-winning Broadway shows “After Midnight” and “Million Dollar Quartet” performed a selection of songs from each respective show, before Pitbull brought down the house with his hottest hits, including “Don’t Stop the Party”, “Fireball” and “Give Me Everything”.

DJ-led sing-alongs and a slideshow of themed guest photos snapped by roving photographers created a truly interactive event, where audience members quite literally became part of the show as photos of individual attendees holding signs customized with the place they’d choose to “Escape” were projected onto the jumbo screen on the main stage.

“Norwegian Escape represents a major moment for us – this is a true evolution of our brand,” said Andy Stuart, Norwegian Cruise Line’s president and chief operating officer. “Not only does she offer high caliber entertainment, quality dining and luxurious accommodations that significantly raise the bar for our fleet and puts her in a class of her own, but she exemplifies our renewed commitment to offering unparalleled freedom and flexibility to our guests.”

Norwegian Escape, the largest in Norwegian’s fleet of 14 vessels, features an elevated design that makes for a decidedly upscale experience. Quality finishes, curated artwork and the most luxurious The Haven by Norwegian™ exclusive ship–within-a-ship suite complex are just a few of the standout features that put Norwegian Escape in a class of her own.

Norwegian Escape’s Haven is the largest in the fleet and the most luxurious. At the heart of the private enclave on the top of the ship lies a three-story covered courtyard. An expanded forward sundeck with a cantilevered whirlpool, along with a new outdoor dining space in the Haven’s private restaurant make Norwegian Escape’s Haven the ultimate small ship experience, while still providing the freedom to enjoy large ship dining, entertainment and amenities.

Continuing with Norwegian’s commitment to excellence in entertainment, Norwegian Escape features two truly spectacular Tony Award-winning Broadway musicals that headline the Escape Theater: After Midnight, the smash-hit musical that combines the big-band songs of Duke Ellington and the best dancing from Broadway; and Million Dollar Quartet, the smash-hit musical inspired by the famed recording session that brought together rock ‘n’ roll icons Elvis Presley, Johnny Cash, Jerry Lee Lewis and Carl Perkins. In a new concept exclusive to Norwegian Escape, the Supper Club has been re-imagined for an unforgettable dinner and show. For The Record: The Brat Pack™ is a critically acclaimed Hollywood night that celebrates classic soundtracks of motion picture masters in a one-of-a kind 360° post-modern cabaret.

Nightlife onboard includes outposts of several popular land-based outlets, including the first-ever Jimmy Buffett’s Margaritaville restaurant and 5 O’Clock Somewhere Bar at sea, a music venue and outdoor bar on The Waterfront that features live nightly performances. The District Brew House, a hip, urban craft beer hall featuring an exclusive partnership with Miami’s own Wynwood Brewing Company, will serve up more than 24 draft beers while The Cellars, A Michael Mondavi Family Wine Bar, features an array of immersive wine experiences, focusing on tasting, education, and the enjoyment of wine. Norwegian Escape will also feature Miami’s oldest and most legendary bar, Tobacco Road.

Norwegian Escape’s recreation spaces are unrivaled, with the largest ropes course at sea leading a wide array of activities. This three-story multiplex of heart-pounding challenges complete with two planks and five Sky Rails, zip tracks that allow guests to soar through the air. On the top of the ship, guests will find a redesigned pool deck area that features an open area for sunbathing, a double-deck bar and two new large format LED screens. Norwegian Escape’s Aqua Park is the largest at sea and includes a new tandem Aqua Racer slide, complete with a clear acrylic section to further enhance the thrill of this adventure ride. Adding to the family fun, Norwegian Escape features an expanded Kids’ Aqua Park with an enclosed slide, rope climb fun zone and spray cannons for kids to splash and play in their own designated space. Along with an expanded Splash Academy youth center that includes dedicated play spaces for specific age groups, Norwegian Escape also offers the line’s first nursery for cruisers two and under.

In addition to family oceanview staterooms that accommodate up to five guests, Norwegian Escape’s accommodations include Studios, designed and priced for solo travelers; and many options for families, multi-generational groups, spa enthusiasts and more.