Since the 1980s, Asean Bintulu Fertilizer (ABF), a subsidiary of the leading Chemical manufacturer in Southeast Asia, Petronas Chemicals Group Berhad, has a production location for carbamide fertilizer (urea) in the Malaysian coastal city of Bintulu (Sarawak) on the island of Borneo.

To meet growing demands, BEUMER Group was contracted to modernize and increase the performance of the plant between the longitudinal stockyard and the ship loading system. The scheduling was very streamlined.

Carbamide, also known as urea, is currently the most widely used nitrogen fertilizer in agricultural industries worldwide, mainly due to its comparably low costs. The demand is continuously increasing due to our growing global population. 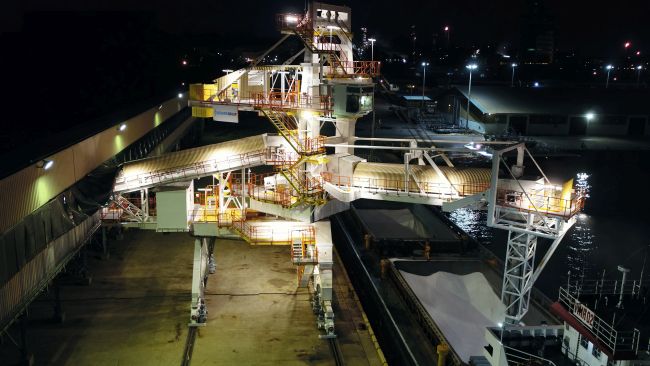 The manufacturing plant in the coastal town of Bintulu on the Malaysian island of Borneo has been one of the biggest of its kind in Asia for many years. It is operated by Asean Bintulu Fertilizer Snd. Bhd., a subsidiary of Petronas Chemicals Group Berhad (PCG).

PCG is one of the largest manufacturers of chemical products in Southeast Asia and the leading producer in Malaysia. 25 companies are part of the group, offering a wide range of chemical products, such as olefins, polymers, methanol, and fertilizers, which are urea-based for example.

Their customers are based in about 30 different countries. The most important markets include Malaysia, China, India, Thailand, Indonesia, Japan, South Korea, Taiwan, the Philippines, Vietnam, Singapore, Australia, and New Zealand. 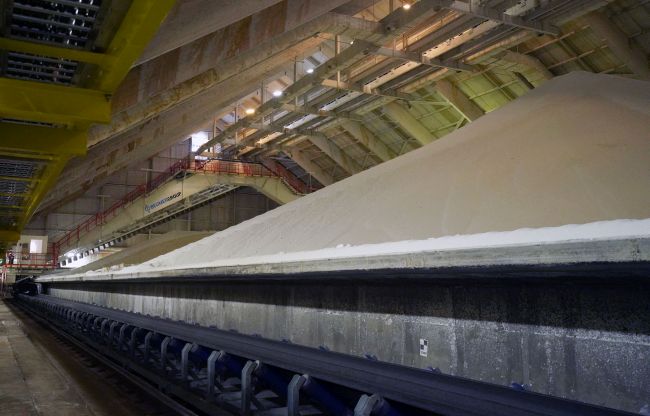 To meet the growing demand for urea, Asean Bintulu had to increase the capacity of its export facilities. BEUMER Group was awarded the contract as a general contractor, and in a consortium with the PBJV Group Sdn Bhd from Malaysia, who took over the assembly of the system. The service provider from Malaysia is responsible for the transport and installation of onshore and offshore pipelines, in addition to other activities. The company also equips ships for their respective jobs in the oil and gas industries.

“This order was a brownfield project,” explains Heinrich Beintmann, Senior Project Manager at BEUMER Group. “This means that we had to integrate our new systems into the existing ones in a way that ensured that the material flow from the longitudinal stockyard to the ship was not interrupted.” Another requirement was that the already available hardware and software components from third-party suppliers needed to be updated to match the increased performance.” 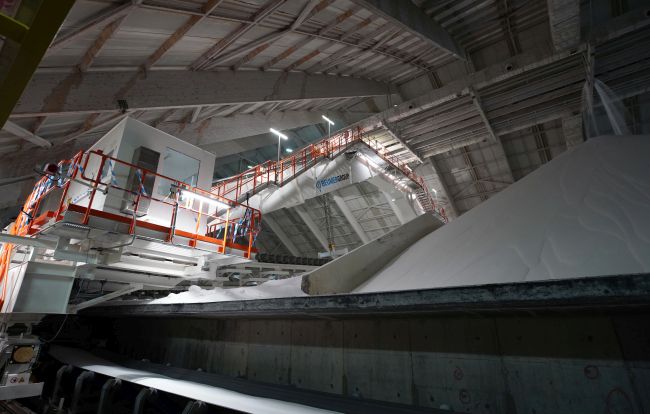 The maintenance of the entire system will become a lot easier thanks to this modernization because all components are on the same technical standard,” describes Beintmann. BEUMER Group, in cooperation with PBJV Group, developed a technical solution which they presented to ABF together with a schedule that met all the required milestones. Asean Bintulu Fertilizer was convinced by the system providers’ hard work over the course of the proposal phase.

AFB’s production location is running 24/7. “To minimize the downtime, we had only 55 days scheduled to complete the entire integration, which was quite a challenge,” admits Beintman. BEUMER Group took over project management and engineering, supplied all the systems and supervised installation and commissioning. 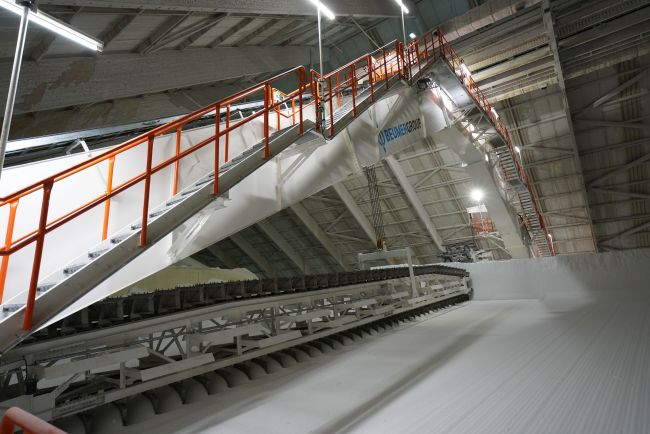 The scope of supply included a portal reclaimer for 600 t/h, the ship loader for 1,000 t/h, a fully automatic tripper conveyor for filling the longitudinal stockpile, a mimic panel to comfortably monitor and control the system, the adjustment of the motor control units, a substation, a transfer station with a capacity of 1,000 t/h and a screening station, the most critical element in the schedule. The system supplier installed a solution with a capacity of 2 x 500 t/h. “We had to disassemble the existing screening station down to the main supports of the building and provide it with entirely new technology,” explains Beintmann.

The transfer station divides the material flow towards ship loading and truck loading. This allows the customer to load either ships or trucks or both at the same time.

The assembly of the portal reclaimer and ship loader was less time-critical because the team could start working on it already prior to the 55-day shutdown before the production plant was closed down. 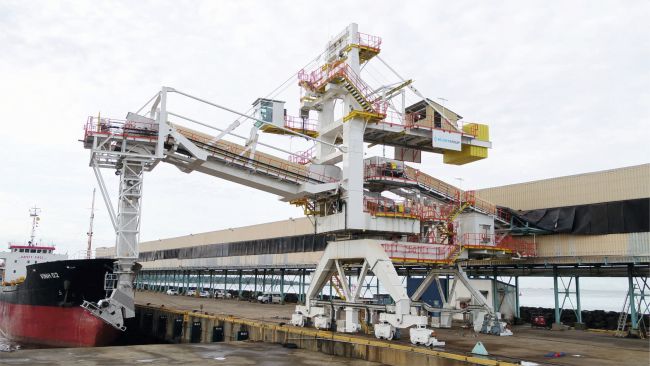 The assembly of the portal reclaimer in the longitudinal stockpile offered an entirely different challenge. “The low ceiling height made it impossible for us to assemble the reclaimer on the floor and then set it up, as we usually do,” so the BEUMER expert. The system supplier had to find another solution: “Here we had to assemble it segment by segment. Challenging and time-consuming.”

BEUMER and PBJV were up for the challenge, and, in close cooperation, developed installation drawings and procedures for each work package, in compliance with the strict safety requirements of all parties involved.

Adapted to the performance requirements 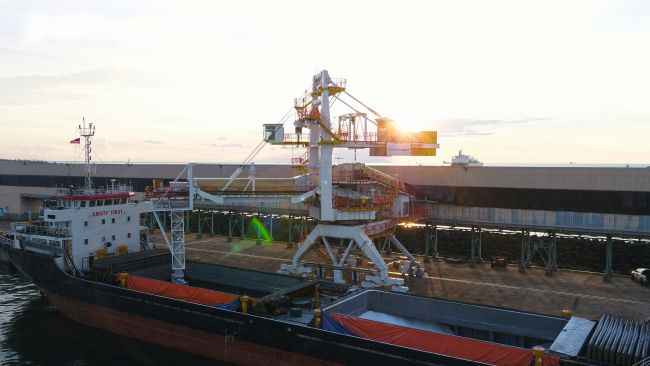 “The existing belt conveyor systems were not designed for the higher performance of our new portal reclaimer,” says Otto Schmelzer, Engineering Manager at BEUMER Group. “Which meant that we had to upgrade the drive stations that were already there.” Not a problem for the system supplier: Because you want all systems used by the customer to run seamlessly with each other, BEUMER continuously develops not only its own products further, but its Customer Support takes care of upgrading mechanical and control technology manufactured by third-parties. “Our customers are incredibly satisfied with our modification concepts, because our goal is to keep already existing structures as much as possible,” describes Otto Schmelzer. This helps companies to reduce their costs, by reducing the number of necessary components and ensuring fast return on investment. Adding shorter installation and handover times was also particularly important with this project.

Belt conveyors transport the urea over the screening and transfer stations to the new ship loader, also supplied by BEUMER Group. The mobile and swivel-mounted ship loader has a telescopic chute and a throw-off belt conveyor to make loading as efficient and flexible as possible. “With this system, our customer can now load ships with 1,000 t/h,” says Beintmann.

Petronas and Asean Bintulu Fertilizer are completely satisfied with the solutions, the progression of the project and the work of the BEUMER and PBJV consortium. “Our part aligned perfectly with the milestones of the entire project,” says BEUMER expert Beintmann. “And the cooperation between the PBJV Group has been exemplary.”

The commissioning for the ship loader took less than three weeks, the entire system was completely commissioned after eight weeks and handed over to the operator.

Coronavirus Effects On The Clean Tanker Market
Want to share your tips and advice? Got questions? Visit the community forum to ask questions, get answers, meet people, and share your tips!