The Panama Canal Expansion Program has made a significant stride forward as it reached 3 million cubic meters of concrete poured in the construction of the new lock complexes for the Expansion Program.

“This signals the progress of the construction of the new locks, which is the most important project of the Expansion Program,” Panama Canal Administrator Jorge L. Quijano said. “The expanded Panama Canal will allow the waterway to provide a better service to our customers and be more competitive.”

The milestone was registered during the construction of the new locks in the Atlantic side, specifically in the second monolith located in the east wing wall water outlet. The wing walls are located at the opposite ends of the lock complexes, where the enormous culverts that are part of the lateral filling and emptying system of the locks finish. The term monolith refers to each of the sections in which the lock walls are being divided to facilitate their construction. 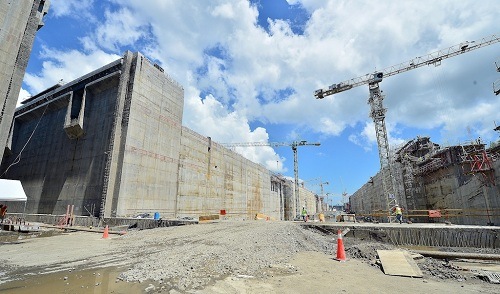 The wing wall outlet is located next to the ocean, where the water used for each transit is finally released into the ocean. The wing wall water intake is located on the end facing Gatun Lake, where water is drawn to fill the lock chambers for vessel transits.

Since the wing wall structure will be permanently exposed to sea water, a marine structural concrete mix was used, providing a greater protection to the reinforcement steel in the presence of chlorides.

The new lock complexes will require more concrete than the 3.4 million cubic meters used for the current Panama Canal, since they are 60% bigger.

As of mid-August, the Expansion Program is 64% complete. It will build a new lane of traffic along the Panama Canal through the construction of a new set of locks, which will double tonnage capacity to face the demand of world maritime trade.

The Triple-E: A Larger-Than-Life Puzzle

VindskipTM: New Innovative Cargo Ship Design Powered By Wind And Gas
Want to share your tips and advice? Got questions? Visit the community forum to ask questions, get answers, meet people, and share your tips!