Today, MSC Oliver, the second of the company’s 19,224 teu series of vessels was inaugurated at the DSME shipyard in Busan, South Korea, just two months after the delivery of MSC OSCAR. It was the turn of Oscar’s cousin, Oliver, to break the traditional bottle of champagne against the ship, in the presence of his father Pierfrancesco Vago, Executive Chairman of MSC Cruises, representing both the Aponte family and MSC Group. MSC Oliver is the second of a total of twenty mega- vessels which are scheduled for delivery by the end of the year. 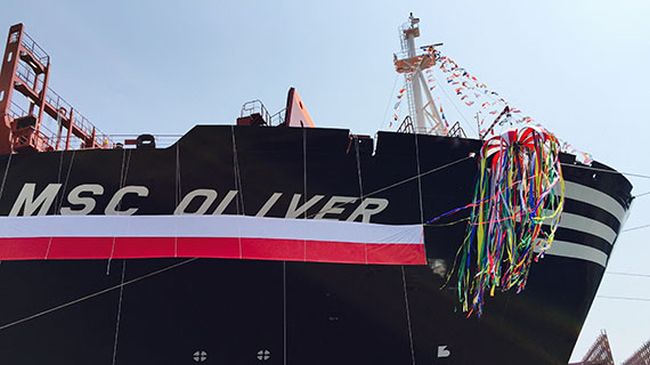 “As these are the next generation of MSC container vessels it is fitting that they be named after the grandchildren of MSC founder, Gianluigi Aponte,” explained Mr. Vago during the ceremony, “Our children carry the promise of this family’s future and these ships, the promise of MSC’s destiny.”

Diego Aponte, MSC President and CEO, and his son Oscar were in Busan just two months ago, to christen MSC Oscar, the largest capacity container ship in the world today. “MSC Oscar and MSC Oliver are ships in the same class – not only can they carry more containers but they are also greener and more fuel efficient than any other container ship we operate,” concluded Mr. Vago.

MSC Oliver goes into service on the Albatross Service which operates between Asia-Europe later this week.