MSC Cruises, the Swiss-based world’s largest privately-owned cruise line and brand market leader in Europe, South America and South Africa, announced that it has signed a letter of intent (LOI) with STX France for the construction of up to four new LNG-powered cruise ships that will be more than 200,000 GRT. The four ships, the first one of which will be delivered in 2022, will be based on a new advanced next-generation prototype and will form what will be known as the “World Class” of MSC Cruises’ ships.

The announcement was made at the Élysée Palace in the presence of the President of the French Republic, François Hollande, as well as MSC Group’s Founder and Executive Chairman, Gianluigi Aponte, and STX France’s CEO Laurent Castaing.

MSC Cruises is the first cruise line brand to develop an investment plan of this length and magnitude, spanning a horizon of more than ten years – from 2014 through 2026 – and introducing a total of up to eleven next-generation ships. The new orders would reflect an additional nearly $4.5 billion investment, which will bring the total value of the Company’s 10-plus years investment plan to nearly $10.2 billion. 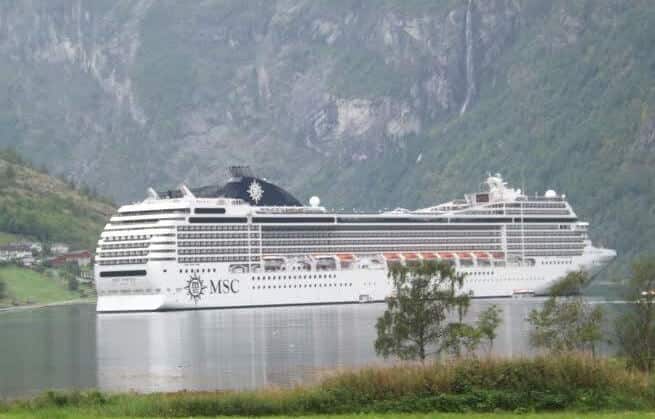 “Today’s announcement is further proof, if needed, of our view that this industry presents significant opportunities for additional growth going forward for both our brand and product, as well as of our firm commitment to be best-positioned to capture them to the fullest,” said Pierfrancesco Vago, MSC Cruises Executive Chairman. “For this reason, our ten-plus year investment plan now encompasses up to eleven new MSC Cruises ships, coming into service between 2017 and 2026. It is also a reflection of our constant commitment to innovation, as we will partner with STX France to design yet again a completely new prototype – already the sixth in our history. In fact, in yet another industry-first, the new MSC Cruises’ World Class prototype will feature – amongst other highly innovative elements – a record-breaking, futuristically-conceived design that will make the ship a truly unique place to be at sea, whilst maximizing the open air space available to guests.”

“Our long-standing focus on innovation will make the new prototype quite unlike anything currently existing in the cruise industry,” continued Vago. “It will be: yet the richest in amenities and features for guests, for both families and their children as well as adults; cutting edge in design all-around; featuring the latest and the best state-of-the-art smart technology at sea; using the most-advanced environmentally-friendly technology available, all the way through the LNG-propelled engines. Moreover, it will be a ship for all seasons and for all regions.”

“We have just signed an unprecedented agreement with MSC Cruises which will give us a vision of our industrial capacity for the next ten years! We have had a good relationship with MSC Cruises for many years now, and this new agreement strengthens this further,” commented Laurent Castaing, STX Frances Chief Executive Officer. “We have already designed four different classes for MSC Cruises – Lirica, Musica, Fantasia and Meraviglia – each with four ships, and now we are working together on this new generation of “World Class” ships. By 2026, that makes a total of 20 ships that will have been designed and built by STX France in Saint-Nazaire.”

“MSC Cruises has been expanding its global footprint and fleet of state-of-the-art ships that combine cutting-edge technology, comfort and unrivalled entertainment with the lowest impact on the environment,” added Castaing. “In order to achieve this next stage of growth, MSC Cruises have selected STX France for our unparalleled engineering and production capacities as part of a long-term partnership – a decision that pleases me immensely.”

MSC Cruises’ investment plan includes orders with STX France for two Meraviglia and two further Meraviglia-Plus Class ships as well as orders with Fincantieri in Italy for up to three next-generation Seaside Class ships. Additionally, the plan encompassed the $227 million Renaissance Program, in which four ships out of 12 of the Company’s fleet, already the most modern at sea, were enhanced and enlarged at the Fincantieri shipyards.

All information believed to be accurate as of the date of issuance. It is the reader’s responsibility to verify its continued accuracy, as all information is subject to change.