The Maritime Union of Australia was joined by an array of speakers in Portland on Monday, including MUA National Secretary Paddy Crumlin, CFMEU National Secretary Michael O’Connor and VTHC Secretary Luke Hilikari, to oppose the loss of the vessel the – MV Portland and the sacking of its crew.

On January 13, at 1am five crewmembers aboard the Alcoa-owned vessel – the MV Portland – were woken by up to 30 security guards and intimidated into leaving the vessel following a 60-day dispute.

The Portland had plied the trade between Western Australia and Victoria for more than 27 years. 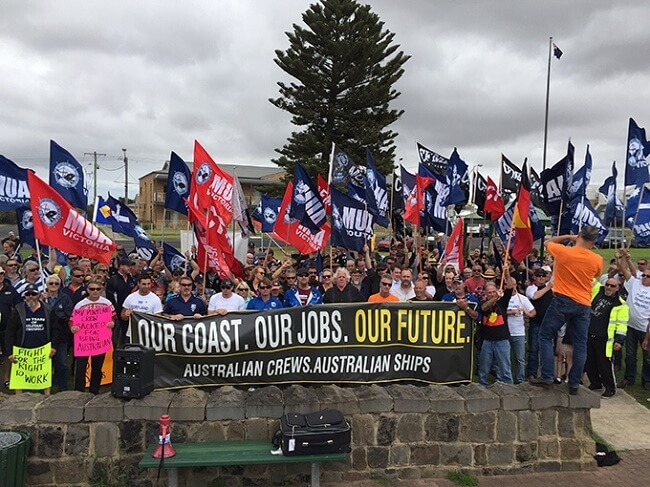 MUA National Secretary Paddy Crumlin was one of the first crew to sail aboard the vessel, which became a pilot for the new qualification – the ‘integrated rating’ – combining the skills of deck and engine seafarers, developed in consultation with unions and industry to make Australian shipping more globally competitive.

“There was a time when business, Government and workers represented by their unions would work together in a mutually beneficial manner,” Mr Crumlin said.

“Now we have crewmembers being stood over, while asleep in their bunks, and intimidated into leaving their ship in the middle of the night, as was shown on the MV Portland a fortnight ago.

“When as a country did we decide we would tolerate such corporate recalcitrance?”
Mr Crumlin said the Turnbull Government was continually trying to find ways to undermine the right for Australians to work in their own country.

“If it’s not trying to do away with labour market testing with 457s, or doing away with visas altogether through free trade agreements, it’s willfully ignoring the will of the Senate by granting Alcoa a temporary licence.

“We’re at the tip of the iceberg here in Portland. The ability of a profitable foreign company to replace 40 Australian workers with unregulated, developing world labour should be a concern for every single working man and woman in this country.”