M.T. Distya Akula is the first Indian Suezmax tanker to load 130,000 mt of Iranian crude for Litasco, the trading arm of Russia’s Lukoil three weeks after the removal of sanctions against Iran.

Distya Akula, Sanskrit for ‘Fortune Transcendental’, has a deadweight tonnage of 150,000 tonnes.

Built by Mitsui Ichihara Engineering and Shipbuilding, Ichihara, Japan, Distya Akula previously known as Front Glory is 269 meters long drawing a draft of 17 meters. She has the capacity of carrying a full load of about 149,000 metric tons of oil cargoes equivalent to about 6000 oil carrying road trucks of standard size.

As per reports Distya Akula replaces the Eurospirit which was first to be booked by Litasco on January 26th, 2016. 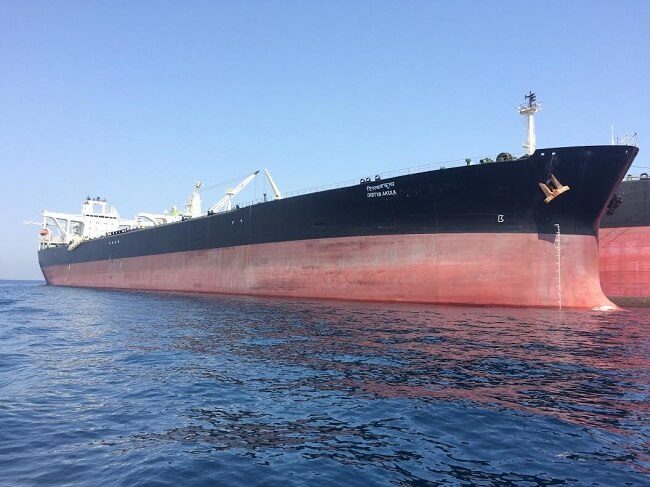 The loading of the crude is scheduled to take place from 5th to 11th February, 2016. Previously Distya Akula was in the Persian Gulf heading towards Al Basrah on January 31st, 2016. Post loading, the vessel will travel from Kharg Island in the Persian Gulf to Constanta on the Black Sea.

The next Suezmax loading out of Kharg Island will supposedly be a vessel chartered by a Spanish refiner, Cepsa, according to media reports. Cepsa is said to be set to use the Suezmax tanker the Monte Toledo to lift 130,000 mt of crude from Kharg Island to Spain.

In partnership with Arya Industries (fronted by Shri Pawan Arya and Shri Puneet Arya) Gauri Ships – which is part of the Elektrans Group – co-owns and operates Distya Akula, Suezmax crude oil tanker. With a crew complement of 24, she is flying the Indian flag.

Imparting his expert views on this landmark accomplishment, Mr. Daniel Chopra- Chairman and Managing Director of Elektrans Group mentioned ‘We have always been at the forefront of innovation. Distya Akula’s assignment as the first Suezmax tanker to lift Iranian oil in the wake of the removal of sanctions against Iran, is indicative of our ambition to embark as a global leader. Our goal is consistently strive to gain global recognition for our company and cater to every requirement of our clients.’

Rising to the occasion, Mr. Puneet Arya- Joint Managing Director and Chief Executive Officer of Arya industries said, ‘The accomplishment is symbolic of our robust foothold and connects that range across the globe. In an endeavor to explore unforeseen avenues, we consistently innovate to enhance the services rendered to our clients. We are ambitious of anticipating and furnishing the requirements of our clients that are impacted by the highly dynamic industry.’