John F. Kennedy, designated CVN 79, is the second aircraft carrier to honor President John F. Kennedy for a lifetime of service to the United States of America as a trusted leader and public servant. He wore the uniform of our nation as a Naval Officer and served as the 35th President of the United States of America, 1961-1963. The ship’s sponsor is Ambassador Caroline Kennedy, President Kennedy’s daughter.

“The keel-laying for CVN-79 is an important milestone in returning a carrier named John F. Kennedy to our fleet, continuing the rich tradition of the name,” said Honorable Ray Mabus, Secretary of the Navy. “President Kennedy was not only an inspirational leader, but also a Sailor, a man who deeply understood the importance of the Navy and the presence it provides – a presence that will soon be enabled for decades to come by this great ship – a ship that will be brought to life through our partnership with the shipbuilding industry and the men and women whose tireless efforts bring our ships from concept to reality.” 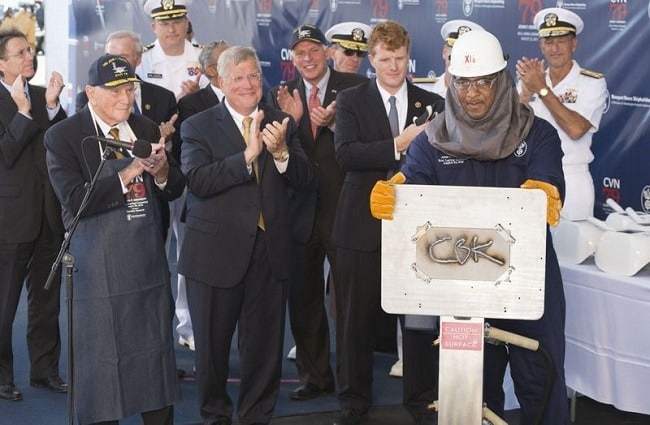 Lt. j.g. Kennedy commanded a Motor Torpedo Boat Squadron in the Pacific during World War II. His torpedo patrol boat PT-109 was rammed and cut in half by a Japanese destroyer during a night patrol on Aug. 2, 1943. Although suffering a serious back injury that plagued him the rest of his life, Kennedy helped his crew get to safety. For his actions, he earned the Navy and Marine Corps Medal, among other citations.

The first John F. Kennedy (CVA 67) was christened on May 27, 1967. “Big John” went on 17 deployments, launched strikes on Iraq during operations Desert Shield and Desert Storm in 1990-91 and participated in numerous multi-nation training exercises throughout the world. One two-week training exercise in the Caribbean turned into a 35,127-mile odyssey to the Mediterranean that spanned six months after periods of tension in the Middle East cropped up during the second half of 1970. After nearly four decades of service, the last conventionally-powered aircraft carrier was decommissioned Aug. 1, 2007.

John F. Kennedy (CVN 79) is the numerical replacement for the USS Nimitz (CVN 68), which is slated for inactivation in 2025. The Gerald R. Ford-class will be the premier forward asset for crisis response and early decisive striking power in a major combat operation well into the 21st century. Gerald R. Ford-class aircraft carriers, along with their embarked air wings and other strike group assets will provide the core capabilities of forward presence, deterrence, sea control, power projection, maritime security and humanitarian assistance. The class brings improved warfighting capability, quality of life improvements for our Sailors and reduced total ownership costs.

Gerald R. Ford-class carriers are approximately 100,000 tons, nearly 1,092 feet in length, have a beam of 134 feet, and can operate at more than 30 knots. The propulsion system is comprised of two nuclear reactors and four shafts. Each ship in the new class will save about $4 billion in total ownership costs during its 50-year service life, when compared to their Nimitz-class counterparts they are designed to replace.

For The First Time, A Female CO To Command US Navy’s Aircraft Carrier