A 63m, Panama-flagged oil tanker Tamaya 1 washed up on a beach on the west coast of Africa without the crew or captain, surprising everyone.

According to MarineTraffic, the position of the huge oil tanker was last recorded on April 22, 2016, steaming southward at 0.7 knots towards Senegal after leaving the port of Dakar. 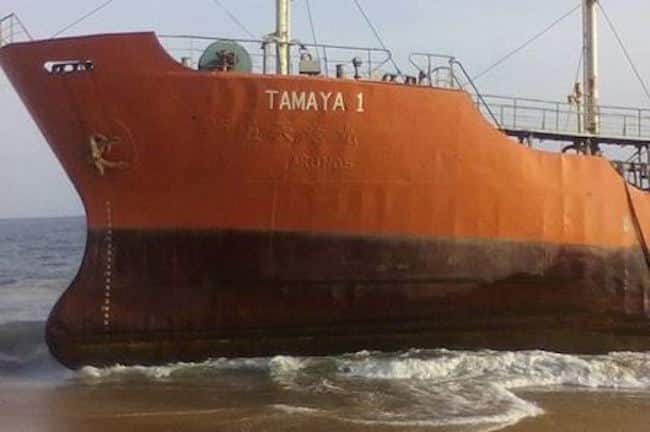 The Liberia national police and bureau of immigration inspected the ship days after local residents first discovered it on the beach. A source from the nation’s port authority told the Liberian Daily Observer, ” Our best bet is that the vessel’s owner might have gone broke and had no money to pay crew member. And therefore the crew abandoned the ship.” The ship has been reportedly looted before the police started to investigate the matter.

However, according to the frontpageafricaonline.com, has finally announced that they have searched the abandoned oil tanker.

“During the search on board the vessel, it was discovered that the abandoned vessel is an oil tanker and but so far no information was established regarding the number of crew members as no crew members were found on board. It was further gathered by the LCG that the vessel was gutted by fire, leaving the bridge (Upper and Control Center) burned along with all documents” – Ministry of National Defense, RL

Civilians have been kept away from the ship since police started investigation.

8 Ghost At Sea Movies You Must Watch

What are Ghost Ships?