Human Rights at Sea (HRAS) announced the launch of an initiative to use the eyeWitness to Atrocities App to record human rights abuses occurring at sea. Developed by the International Bar Association (IBA), the App, through its unique capabilities will enable those working in the maritime environment to use Android smartphones and tablets to document crimes – such as murder, armed robbery, human trafficking, piracy, and drug smuggling – in the knowledge that the images captured will be admissible as evidence in a court of law.

David Hammond, CEO of HRAS, said “This is another maritime first using the power of technology in order to assist in evidential gathering of potential or actual human rights abuse incidents which ordinarily would occur out of sight and out of mind at sea. Up to this point such evidence has often been hidden from the investigatory efforts of our Charity that wishes to identify and address such abuses that would otherwise go unreported within the maritime environment. Today, the ability of those individuals or entities who wish to cover up or ignore abuse has been deal a significant blow. 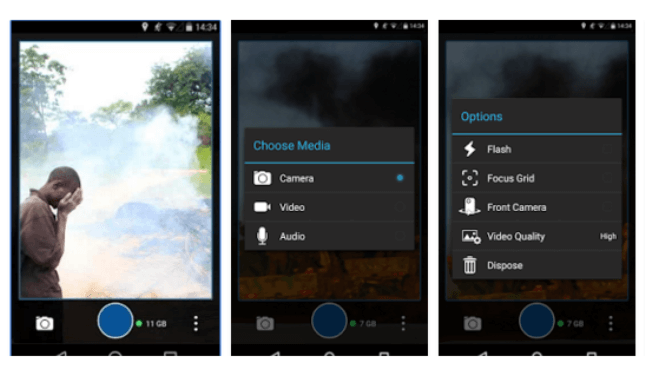 I am delighted that the International Bar Association alongside the eyeWitness Board recognised the potential of the Human Rights at Sea platform and associated maritime projects to help to uncover these incidents and to assist in delivering justice for seafarers and fishermen subject to human rights abuses wherever they may be in the world.”

The eyeWitness to atrocities App is a unique tool in the fight against human rights atrocities and abuses. It is an easy-to-use camera app that collects and embeds, in the images taken by a user, GPS coordinates, date and time, device sensor data, and surrounding objects such as Bluetooth and Wi-Fi networks. The collection of this metadata provides verification and context and is encrypted and securely stored within the app together with the images. The user may then upload the footage directly to a secure storage facility, hosted by LexisNexis and maintained solely by the  eyeWitness organisation. In doing so, a chain of custody record verifies that the footage has not been edited or digitally manipulated. Thus, the images attain a level of authentication which allows for their use in investigations or trials.

Mark Ellis, IBA Executive Director, commented: “The increasing number of reports about violations of human rights taking place at sea demonstrates the serious and rampant nature of these abuses. Working with Human Rights at Sea to combat the impunity that the perpetrators of these crimes currently enjoy is a new development which we at the International Bar Association wholeheartedly welcome.”

Wendy Betts, Director, eyeWitness added: “The founding principle of HRAS that ‘Human Rights apply at sea as equally as they do on land’ is a premise shared by eyeWitness. Empowering seafarers to capture vital information that can serve as key evidence in legal investigations into these violations underlies our common aim to increase justice and bring prosecutions through relevant authorities. This collaboration could not be more opportune.”