In particular, First Lady Kim Jung-sook served as godmother who cut the ropes to officially name the ship during the ceremony.

‘HMM Algeciras’ is the first of twelve 24,000 TEU-class vessels scheduled to be sequentially delivered until September, 2020.

In September 2018, HMM signed a formal contract for its twenty eco-friendly mega container vessels with three shipyards – DSME, HHI(Hyundai Heavy Industries) and SHI(Samsung Heavy Industries) in an effort to take proactive actions towards market change as well as form a sustainable profit-generating structure. 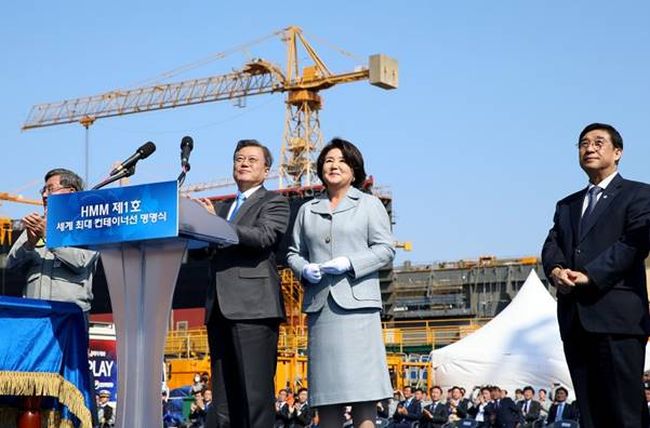 “For me, it is very meaningful that HMM takes delivery of the most technologically advanced containership in this difficult time. I would like to celebrate it and hope that HMM continues to secure a competitive advantage as a Korean national flagship carrier.”, says Moon Jae-in, President of the Republic of Korea.

“HMM will strive to expand its presence in the global shipping industry based on optimised fleet management and new cooperation with THE Alliance.” adds Bae Jae Hoon, President & CEO of HMM.