The Coast Guard Cutter Taney shines in all its glory in Baltimore’s Inner Harbor as “the last survivor of Pearl Harbor,” but it has a darker story to tell – the ship may still carry souls aboard.

The Taney’s story begins Oct. 24, 1936, when the ship was commissioned at the Philadelphia Navy yard. Shortly after being commissioned, the Taney was moved to its first homeport in Honolulu. There, the crew carried out supply and search and rescue missions until World War II.

On Dec. 7, 1941, the alarms sounded: AIR RAID, PEARL HARBOR. THIS IS NO DRILL. Chaos erupted as Japanese planes flew overhead. Crewmembers scrambled to get to general quarters. Anti-aircraft guns were manned and ready to fire.

Four years later in 1945, the Taney served as an amphibious command ship during the invasion of Okinawa. The ship’s gunners shot down five planes during 119 separate engagements.

“It is rumored that a Japanese pilot was taken aboard for medical attention, but it’s not in any of the ship’s historical documents,” said Sarah Rauscher, Historic Ship’s education coordinator.

Today, it is believed some of the crewmembers from those historical events may still be aboard. Staff members and visitors alike have made various reports of paranormal phenomenon.

“I, personally, have never experienced anything, but we get a lot of reports and some of the workers swear they’ve seen something,” said Rauscher. 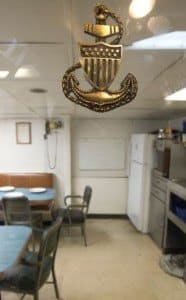 Rauscher said most of the reported activity comes from the forward part of the boat near the Chief’s Mess and damage control office.

“Overnight workers doing rounds will walk by the Chief’s Mess and see someone inside the room, which isn’t possible because all of the rooms on display like this are under lock and key,” Rauscher said, pointing through the window on the locked door.

Other reports include seeing spectral forms gliding across the deck or through hatches, hearing someone frantically move through the ship and hearing commands given over a now defunct public address system.

Although it cannot be confirmed a Japanese pilot was ever brought aboard, some people say they’ve heard a man speaking Japanese, particularly near the galley, which doubled as a medical ward.

“We have overnight youth programs every once in a while, so sometimes the parents will do the rounds at night,” said Rauscher. “A parent was sitting in the crew’s mess area and saw someone standing in the passageway by the damage control office. The parent got up to check, only to realize no one was actually there.”

The SyFy channel’s own Ghost Hunters braved it out for a night on the Taney and confirmed some of the activity.

The Taney has a long service record and has seen many historical events in its time. Though the ship’s time in the Coast Guard has passed, it is no guarantee the ship’s crew has done the same.

USCG Offloads 27,000 Pounds Of Cocaine At Base Miami Beach

USCG To Offload 14,000 Pounds Of Cocaine In Port Everglades