Cummins is integrating the five 12V250 engines into gensets designed to power Oceaneering’s new vessel, MSV Ocean Evolution, which is expected to launch in early 2016.  Oceaneering is a global oilfield provider of engineered services and products primarily to the offshore oil and gas industry with a focus on deep-water applications.  “The GE Transportation team is very proud of this major milestone marking the first delivery of our Tier 4 emissions compliant diesel engines,” said Afra Gerstenfeld, General Manager of Transportation’s Marine group.   Our investment in this technology helps our customers meet their emissions requirements in the most efficient manner possible today.” 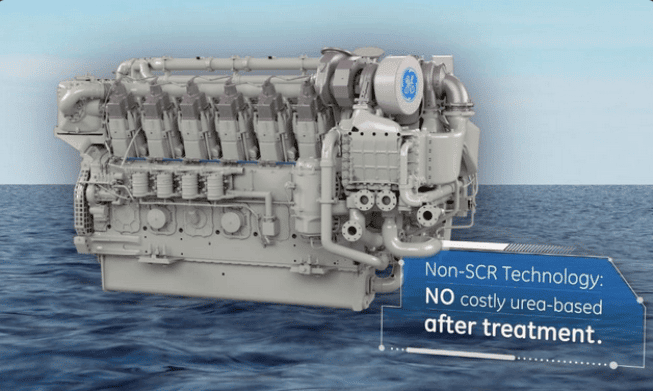 GE Marine’s breakthrough engine technology eliminates the need for a Selective Catalytic Reduction system (SCR) for exhaust gas after-treatment and for storing or using urea aboard a vessel. The result preserves valuable cargo and tank space.

A study to be published in early 2015 commissioned by GE Marine from Jensen Maritime, a leading naval engineering and architectural firm, compared GE Marine’s in-engine Tier 4 solution to a competitor’s solution requiring urea after-treatment on a typical line-haul tug.  A few of the highlights cited in the study include: