Danish shipping group DFDS signed an agreement to acquire 98.8 % of the shares in the shipping company U.N. Ro-Ro from Turkish private equity companies Actera and Esas for a price of EUR 950 million. U.N. Ro-Ro is Turkey’s largest operator of Ro-Ro freight ships, and a strong addition to DFDS’ large shipping network in the Baltic Sea, The North Sea and the English Channel. In the Mediterranean, DFDS is today represented by a route between France and Tunisia.

U.N. Ro-Ro operates five major routes between Turkey and the EU, connecting the Turkish ports of Pendik, Ambarli and Mersin with Trieste and Bari in Italy, Toulon in France and Patras in Greece. The company operates and owns a fleet of 12 large Ro-Ro ships and operates port terminals in Pendik, Istanbul, and Trieste in Italy. In cooperation with rail operators, U.N. Ro-Ro also offers intermodal transport between key EU markets and the ports. 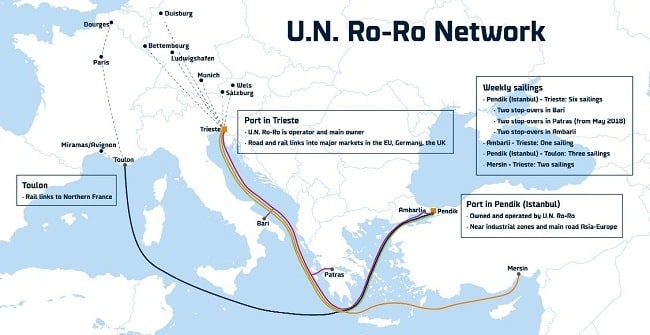 “Turkey’s economy is among the world’s 18th largest. Trade with the EU is extremely dynamic. Since U.N. Ro-Ro was founded in 1994, seaborne trade has continued to take market shares from road transport where congestion, border controls and customs formalities hinder the flow. Today, 55 % of the trade is seaborne – and the share continues to grow, benefitting not least U.N. Ro-Ro, which is the major operator in this market,” says Niels Smedegaard, CEO & President of DFDS A/S

“The operation of Ro-Ro ships and operation of port terminals handling a high number of unaccompanied trailer units – and containers for reloading to rail transport in the ports – are very similar to DFDS’ business in the North Sea. So are the goods transported – machinery, automotive parts, vehicles, electronics, computers, plastic products, textiles, clothing, food, fruit, beverages and other,” says Niels Smedegaard. DFDS is even familiar with the ships as they were all built at the Flensburg Shipyard in Germany where DFDS has also been building efficient ships of a similar modern design.

ReCAAP: Report On Incidents Of Piracy & Armed Robbery Against Ships
Want to share your tips and advice? Got questions? Visit the community forum to ask questions, get answers, meet people, and share your tips!