A Damen Trailing Suction Hopper Dredger (TSHD) 1000 was launched at the Krasnoye Sormovo Shipyard on 29 January. The TSHD, named Sommers, is the lead vessel of a series of three TSHDs 1000 being built for Rosmorport.

The TSHDs are scheduled for delivery this year, the contract between Rosmorport and Krasnoye Sormovo Shipyard having been signed in April 2014. Keel laying of the Sommers was held in November 2014. The other two dredgers are to be named Kronshlot and Kadosh respectively. 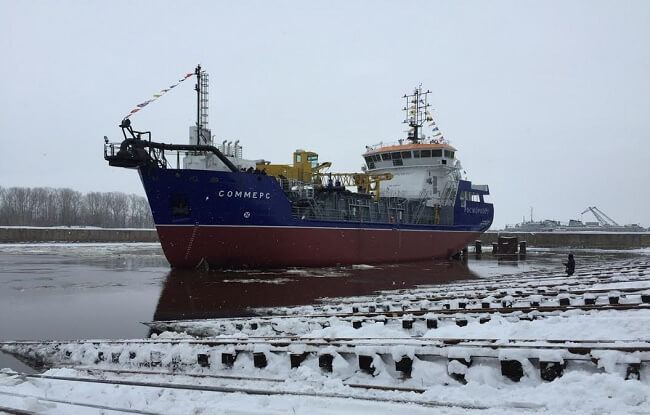 The dredger is 62.6 metres in length, with a 14 metre draught, a hopper capacity of 1,000 m3, and a deadweight of 1,685 tonnes. The 500 mm diameter trailing pipe works at a maximum dredging depth of -20 metres. It is connected to a diesel-driven Damen dredge pump, type BP5045MD, designed for both hopper loading and discharging purposes. The TSHD 1000 series are able to operate at water temperatures between -2 ° C to + 20 ° C.

All three of the vessels will be tailored to meet client requirements and to operate in local climatic conditions. The TSHD 1000 vessels will feature a state-of-the-art package of dredging solutions, including dumping through bottom doors or a pre-dumping door and pumping ashore through a bow coupling unit as well as rainbowing.

The yard is on schedule to deliver all three TSHDs on time. The vessels will perform maintenance dredging in the basins and access channels of the ports of Ust-Luga, Big Port St. Petersburg and Tuapse.