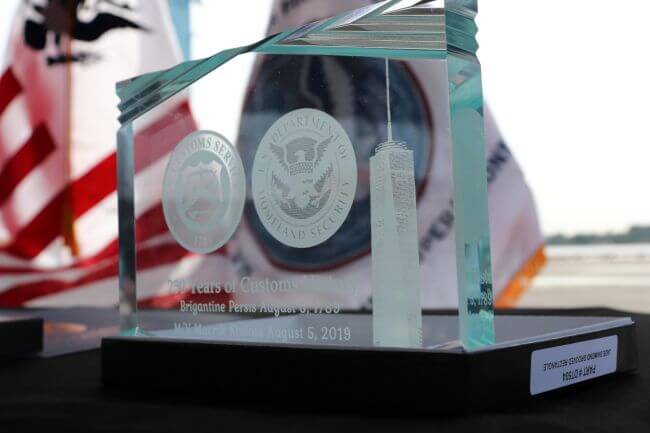 APM Terminals Port Elizabeth terminal ceremony and US-flagged vessel Maersk Kinloss recognize the nation’s first vessel clearance performed by United States Customs officials, on August 5th, 1789. Standing in for the two-masted sailing ship Persis, which arrived at the Port of New York on August 5th, 1789 with a load of cargo from Italy, the 6,200 TEU capacity US-flagged Maersk Line, Limited vessel, Maersk Kinloss was the focal point for a commemorative ceremony honoring 230 years of service by US Customs at America’s seaports on August 5, 2019.

During the ceremony, the Captain of the Maersk Kinloss, Christopher Murray, presented in person the Application for Unlading (CBP Form #3171) for the vessel to CBP Director of Field Operations Troy Miller, and acting Port Director Dylan DeFrancisci.

Before a group of senior port executives, CBP leaders, Coast Guard leaders, media and other invited guests, the Customs document was duly signed and stamped, formally executing the permit in accordance with the procedures of the late 18th Century; in that era this process would also have included the payment of the tonnage taxes due to the Customs Collector.

Speaking at the ceremony, Maersk Americas Head of Corporate Security and Regulatory, Mark Tierney, representing Maersk and Maersk Line, Limited, the US-flagged division of Maersk Inc., and APM Terminals, noted that the Maersk Kinloss had also entered New York Harbor from a Mediterranean seaport, though representing a far larger scale of international trade.

“As we commemorate the very first vessel cleared by US Customs at the Port of New York two centuries and three decades ago, we must also recognize that each year, this port alone receives and processes approximately 17,000 commercial vessel calls now annually – and the CBP is doing an outstanding job in meeting the challenges of expanding global trade volumes and increasing vessel size and cargo capacities.”

A Customs duty fee of $774.71 was collected based upon the assessed values of the goods entering the port 230 years ago aboard the Persis. In 2018, the total value of US merchandise imports exceeded $2.6 trillion, with the United States now the world’s largest importer of merchandise goods.

“We at Maersk and APM Terminals are proud to partner with the men and women of US Customs, the US Coast Guard, the Port Authority of NY/NJ and the International Longshoremen’s Association, as we together serve the region, and the United States of America in this vital link of the global logistics chain. US Customs took the approach of integrating security into commercial operations and establishing global partnerships which has benefited our industry’s customers from port of loading overseas to final delivery at our customer’s distribution center. Working together with US Customs and the US Coast Guard is vital to our nation’s economy and keeping our port commerce safe, secure and flowing,” said Mr. Tierney.