You are here: Home › Naval Architecture › What Are Line Throwing Apparatus On Ships?
TwitterFacebookLinkedInPinterestBuffer

Line throwing apparatus refers to a class of life-saving appliances (LSA) that are found on every vessel. It is used to throw weighted ropes known as lines over long distances.

It uses a variety of launching methods and can be used for numerous maritime applications. From hauling supplies, connecting ships, and providing supply lines, to aiding in rescue operations, line throwing apparatus are an essential component of any ship, irrespective of whether it traverses the oceans or stays within domestic waters.

These apparatuses also have applications outside the maritime domain but are relatively uncommon due to the availability of better-suited line throwing equipment.

In this article, we will look at the history, evolution, types, and specifications of the line throwing apparatus.

The line throwing apparatus has been in use for several centuries, in a wide variety of forms. It initially started off as manually launched lines that had shorter ranges and were not very accurate. They faced problems on wind-powered boats and ships since they were dependent on wind speed, wind direction, and the operator accuracy.

To make up for this inefficiency, John Bell invented an idea in 1791 for a system that could launch a line from a ship. This system was aimed at being used in distress situations for rescue operations. Although this is one of the earliest recorded instances of a mechanical line launching apparatus, the idea did not catch on and was not widely implemented.

Over the course of the 19th century, several inventions were implemented that could launch short-range lines from the ship. They were also mainly aimed at rescue operations and one or the other invention was quickly implemented on most ships.

The Manby mortar of 1808, invented by the inventor of the portable fire extinguisher Capt. George William Manby was the first in a line of commercial line throwers. It used a mortar design that could launch a line to a shipwreck or to stranded sailors. It is credited as being the first large scale launcher that had saved over 1,000 lives prior to the death of its inventor. However, it worked on shorter ranges, could only be launched from the shore, and was too cumbersome to easily transport.

The Rocket Life Saving Apparatus invented by Henry Trengrouse was the next line thrower that became a staple onboard most ships. It had a superior range and was much lighter than the Manby mortar. Instead of the use of a mortar, the Trengrouse design made use of a rocket that had been stabilized in a cradle. In most situations, a chair or other nearby equipment could be used to form the support cradle. In addition, due to the gradual acceleration of the rocket, the line was not instantaneously broken when launched; this was a problem commonly associated with the mortar system. The Trengrouse design could be used onboard ships and was easily portable which made it a favourite amongst seafarers.

The next innovation in line throwing was the Lyle gun which was a short-barreled cannon that had been built to launch a line. Invented by Lieutenant David A. Lyle of the USLSS, it was primarily implemented by the United States Life Saving Service (USLSS). Until its replacement with rocket-powered lines, the Lyle gun was in use until 1952. The head attached to the line was generally made of cast iron and was powered with gun powder. It faced a major issue with recoil since a standard shot could propel the gun over 6 feet backwards. The design was primarily used for shore-based rescues of wrecked ships where the cannon could be suitably restrained to prevent reverse blast.

Lastly, the Boxer Rocket, created by English inventor Edward Mounier Boxer was commonly used till shortly after World War II. It was based on a two-stage rocket design that could carry the line further than earlier designs. It was also considered to be more accurate than other models and was widely implemented. It served as a rescue line and was in use during the world wars to rescue sailors from wrecked ships. It was mainly used as a shore to ship launcher due to its design and inherent weight. However, due to the cumbersome nature of priming a two-stage rocket, it was given up for other line throwing equipment.

Check out this video of working of line throwing apparatus.

Pyrotechnic systems are volatile and can be extremely dangerous due to accidental ignition. In response to growing concerns about the safety of pyrotechnic systems, pneumatic based launchers were invented and widely implemented in the late 20th century.

Rocket based launchers are a type of pyrotechnic system and are commonly preferred as they meet SOLAS requirements and are easily available commercially. They involve the ignition of the main rocket that is attached to a line made of a strong material that is capable of flexing without tearing. Another modern-day apparatus is the shoulder-fired line thrower, that is similar to a rocket-propelled system launched from the shoulder. This results in added stability and is usually lightweight enough to be easily carried. It has a very high range owing to the propulsion power of the firing systems. The slingshot mechanism also has a high range and is considered to be very accurate. Most of these systems can be operated by a single person and are portable.

Pneumatic line throwers are a very common type of launcher mechanism that has been in use from the late 20th century. Despite the prevalence of other technologies, it is still used at present for ship to ship and ship to shore application. The system makes use of Newton’s Third Law- every action has an equal and opposite reaction. Due to pent up pressure within the launcher module, the line and weighted projectile are propelled forwards. Since air provides the propelling force, there is no issue with recoil or reverse blasts. The range and direction are determined by the amount of pressure build-up.

Lighter lines are made of Dacron or Spectra and are often used as messenger lines to haul heavier and more durable lines made of Polyspectra or Polypropylene. Pneumatic systems can also launch vertical lines that can be used for vertical climbing. This is commonly used for boarding another vessel from a smaller boat, such as during anti-piracy or tactical navy operations. These systems make use of titanium grappling hooks that are able to support the movement of heavy goods.

The line throwing apparatus is kept on the bridge in general, as this is the main control centre of the ship. Specialized container units are placed for stowing the apparatus on board. The unit consists of a rope attached to a head that is coiled within a storage cylinder. The cylinder arrangement is spring-loaded and is provided with a trigger for activation.

To operate the apparatus, the unit is secured on to a bollard or a similar sturdy structure. This is to ensure that one end of the apparatus is stable. Once the proper aim has been established, the unit needs to be triggered. On pressing a lever, the line and head are propelled outwards. Preferably, the entire set up is to be kept at 45⁰ to the deck of the ship such that the projectile can traverse the longest range. In addition, propelling the components in the direction of the wind can increase its range.

The line is mainly used for logistical and rescue operations on ships. For logistical support, the line is launched towards another ship, or towards a floating supply crate. In the case of a supply crate, the line is fitted with hooks that can latch on to the package and safely tow it towards the ship. In the case of another ship or supply vessel, the line is launched and then picked up by the other ship. Other lines are then passed across to make the connection secure. After this, crates and packages of goods are hauled across the connection lines. Lastly, the lines are disengaged from the supply vessel and are hauled back to the ship. 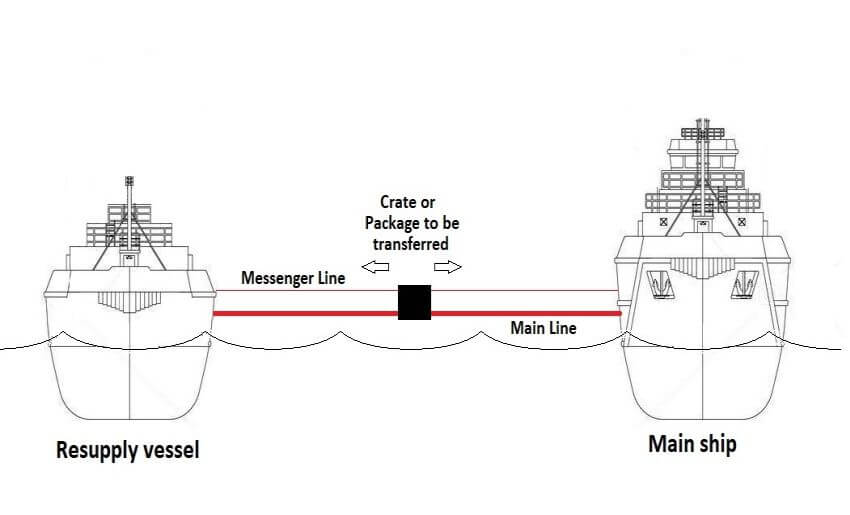 In the case of rescue operations, stranded and floating individuals can catch the line and be hauled onboard a ship. The line creates support across which a buoy or life jacket can be sent. The line is launched such that it overshoots the position of the sailor, and it is then towed back allowing them to grab on to the line. The head of the line is weighted and care must be taken while launching it so that it does not make contact with the individual and cause injury.

The International Convention for Safety of Life at Sea, abbreviated SOLAS, is an internationally accepted marine safety standard that is implemented by the International Maritime Organization (IMO) which is the United Nation’s maritime watchdog and observer.

The SOLAS manual lists the guidelines regarding line throwing apparatus, the performance standards, and operating conditions that are to be maintained on every ship. In Chapter 3 of the SOLAS guide, regulation 18 states that there must be at least one line throwing apparatus on board the vessel at all times.

Regulation 7.1.1 of chapter 7 from the LSA code provides the following restrictions and specifications for all line throwing appliances:
1. The apparatus must be capable of throwing a line with reasonable accuracy
2. The appliance must include not less than four projectiles. Each should be capable of carrying the line at least 230 meters in calm weather.
3. The appliance must include not less than four lines. Each line must possess a breaking strength of not less than 2 kN.
4. The apparatus must include brief instructions or diagrams that clearly illustrate the use and operation of the line throwing apparatus.

Regulation 7.1.2 from chapter 7 of the LSA code states that the projectile must be contained within a water-resistant casing. The projectile can include just the rocket, in case of pistol-fired rockets, or the integrated rocket and line, in case of an assembly unit. It further goes on to state that in the case of a pistol-fired rocket, the rocket and line assembly shall be stored in a container along with means of ignition. This is to allow for immediate action in case of an emergency. The container must be satisfactorily protected from the weather.

The aim of these safety standards is to prevent any untoward incidents from occurring. Line throwing apparatus has a wide variety of applications, and special care must be taken to ensure that they are routinely serviced and maintained.

Hull of a Ship – Understanding Design and Characteristics