As the world looks to cleaner sources of fuel, it becomes important to be able to ship and transport these sources from large stockpiles and deposits, to countries where they are used.

Growing demands on the liquified gas fuels have often posed a challenge, owing to the restricted sizes of most gas carriers.

These tanks are built under the deck and regulate gas loading and unloading using a system of pumps and valves. In this article, we will take a look at the construction, design and layout of a classic VLGC vessel.

To build massive ships that are able to transport large quantities of volatile gases, it is important to assess various safety aspects of the carriers. In addition, since we are dealing with gases and liquids which are harder to move, there must be adequate loading and unloading mechanisms.

While solids can easily be moved using cranes, liquids and gases must be drained completely at the port of unloading. Any residual substances can pollute or contaminate any incoming cargo.

VLGC vessels are generally around 250-300 meters long, and house anywhere between four to six storage tanks running along the centerline.

The VLGC designs feature double bottom structure and an additional side shell in certain carriers. The purpose behind having multiple hulls is that it is possible to contain a leak, while also providing room for the vital components of the ship. 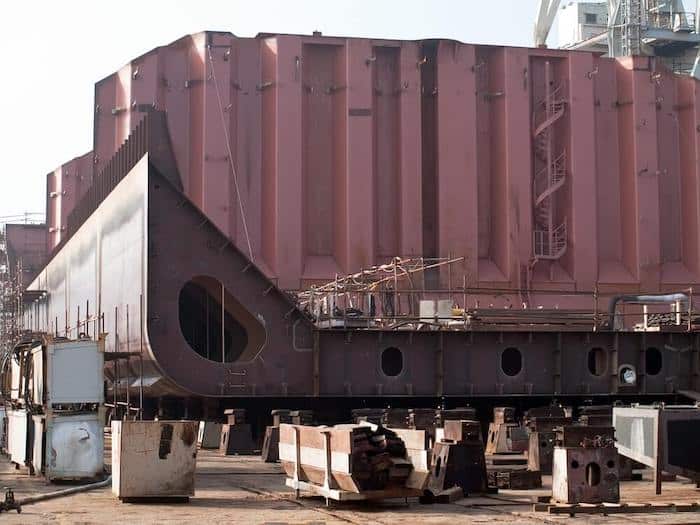 Most of the electrical wiring and pipes required for the operation of the ship runs within this shell. Often, the double bottom also has a ducted keel that allows main connections and wires to run along the entire length of the ship unobstructed.

Any components essential for the functioning of the tanks are located in a large dome built on top of each tank.

The tank systems on a VLGC vessel is built of the following components- the primary barrier, secondary barrier (optional), bulkheads, insulation, and supporting structures.

The primary barrier is the tank itself, and can vary in shape and size. The common types of tanks are prismatic (class ‘A’), spherical (class ‘B’) and cylindrical (class ‘C’).

The most favorable class is the prismatic tank, as it allows for larger storage holds by conforming to the shape of the hull. The spherical tanks are often contained within a vertical skirt that attaches the tank to the hull. This provides the tanks with additional support members.

Lastly, the class ‘C’ or cylindrical tanks can be positioned in either a transverse or longitudinal manner, although lobed structures are also common.

All these tanks also incorporate longitudinal bulkheads that run along the length of the tank. These reduce the sloshing effect as a result of the Free Surface Effect (FSE) that is known to drastically distort the stability of a vessel.

The spherical containers are often known as Moss tanks, and are called self-contained units. They are fast being replaced by the prismatic class of tanks due to the higher volume of storage.

In addition to a tank-based self-contained system, there is also a membrane design that is used on a few VLGC vessels. These membranes are used to regulate the cargo between the various holds of the vessel and allow for a much faster loading and unloading process. However, the biggest issue with having membrane structures is that they are not resistant to the large forces of sloshing.

As a result, they are not suitable for use in regions with poor weather conditions. Specially stiffened membranes are currently being experimented with. However, for the time being, self-contained units continue to be the regular means of transporting these types of cargo.

The loading and unloading operations are a very critical process that must be executed with the utmost safety precautions. To remove the liquid cargo, a set of three pumps housed in a pump tower are used.

Each tank spans several meters in length, and so requires two main pumps for loading or unloading the bulk of the cargo. These pumps hang down from the top of the tank till the bottom. In addition, there is a smaller pump called the spray pump that ensures maximum discharge of the cargo during unloading.

The spray pump can also be used to collect the portion of the LNG or CNG that evaporates for the purpose of running the marine engines. Thus, the spray pump plays an important role, as it is able to convert some portion of the cargo into usable fuel for the ship. The pump tower also houses important equipment and telemetry units that gauge the cargo levels, temperature and overall pressure.

This information is relayed to the bridge where it is assessed by engineers to ensure that the cargo is being safely transported. The several cargo pumps emerging out of the storage tanks are connected to main cargo line that runs along the deck of the ship. Similarly, the spray pumps also collectively discharge the vaporized cargo into a common pump line.

The process of cargo loading and unloading is completed in several steps to ensure that safety regulations are followed. Also, if not properly monitored, equipment on board the ship can suffer damage.

The first step before approaching a port or transport facility is for the tanks to be emptied of any remaining oxygen. O2 is a highly volatile gas that easily combusts, especially in the presence of substances such as LNG or CNG. So, an inert gas is pumped into the chamber until the oxygen content drops to below 5%.

There are two main subsequent processes that must be completed before the tanks can be filled with the liquid cargo. The first is known as a “gas-up” state. Here, spray pumps vaporize a small amount of the cargo and heat it in the gas burners present on board. This vapor is then redirected to the tanks, so that the inert gas can be replaced. Until the cargo vapor reaches specified parameters, the inert gas is released into the open.

However, beyond the safe limit, is transported to a compressor plant in the port, so that any remaining hydrocarbons can be safely disposed of. As these chemicals are highly volatile, it is important to process them as quickly as possible. The tanks are now said to be in the “gassed-up” state.

Any vapors that are discharged are collected for reliquification or for disposal. The temperature at which loading can commence is -140℃, and the spray pumps work until this temperature is reached. The tanks are now in the “cooled-down” state. From here, liquid cargo is pumped into the tanks until the storage capacity reaches 98.5%. The reason for keeping a small portion of the tank empty is to account for expansions or vapor build-up.

Once it is time for the cargo to be discharged or unloaded at the destination port, the main cargo pumps come into action. In general, it is effective to slowly fill the tanks with gas while it is being discharged. For this purpose, either air can be pumped in, or a small amount of the cargo is retained for heating. By allowing this gas to circulate, the vessel again reaches the “gassed-up” state. This saves time during the next cycle of loading, by keeping the vessel prepped for the “cooling-down” process.

As mentioned above, the most common cargo that is transported on board these VLGC vessels are LPG and CNG. However, this places the shipping companies in a unique position when it comes to logistics.

However, during the return, the vessel is not able to transport any goods and faces a loss. In addition, without any cargo, the vessel sits considerably high in the water and must rely on the ballast systems to keep it stable. Thus, shipping companies often use VLGC vessels to transport other gases as well, so as to maximize their profits.

Fuel gases such as LPG, CNG, LNG are commonly transported, while chemical alkenes such as butadiene, ethylene and propylene are also shipped. In addition, chemicals such as ammonia, chlorine and vinyl chloride are often also transported using these carriers.

The issue with transporting such cargo are that noxious fumes pose a major safety hazard. In addition, chemical exposure also poses a serious problem. Chemicals such as ammonia or vinyl chloride can cause severe and lasting damage with even the slightest of exposure.

As most of the cargo is flammable, the vessel is a safety hazard even with precautions in place. Lastly, as the cargo is shipped in a super-cooled state, there is a very high chance of hypothermia or frostbite setting in during prolonged exposure to these tanks. Important safety protocols must be in place to keep the crew safe during the vessel operations.

In general, VLGC carriers are extremely safe when it comes to the hazard of spillage. The tanks on board are capable of retaining gases and liquids up to a very high temperature and pressure range. Also, they are hermetically sealed and insulated to remove the slightest chance of damage.

Finally, the tanks are protected with cofferdams and supports to keep them stable even during severe heeling or turns. Thus, although the cargo that they carry is highly volatile, these carriers are more safe than general oil tankers when it comes to the spillage aspect. According to studies on the safety of these carriers by HAZID, the chance of a major industrial level disaster is 1 in every 100,000 trips.