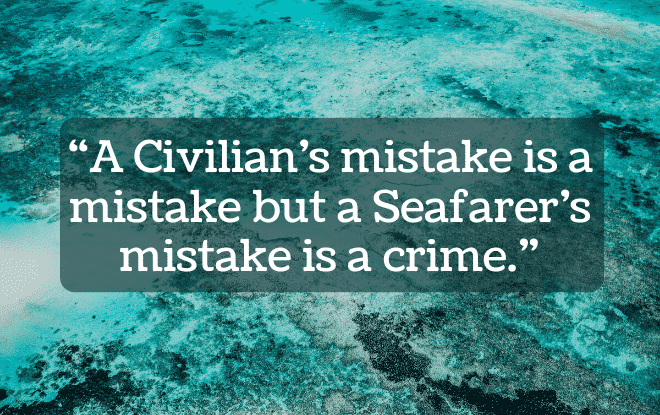 Most of the time when a charge is brought against the captain of the ship which caused the damage, there is a “wrong belief” that it had an intention on the part of him to commit the offence.

Generally, due to lack of knowledge on the part of the authorities, the seafarers being nearest to the site of the accident are prosecuted by the “local laws” of the country, where such incident took place, even though they may be sailing on a different nationality flag or themselves being from some other country.

Further, it’s the question of operational failure on the vessel which has caused the incident or accident and there is no “mens rea” to cause damage to anyone.

Criminalization of seafarers is of great concern to the marine transportation community. From a practical perspective, seafarers are the single most valuable resource of the industry.

More importantly, from a human perspective, seafarers are a uniquely vulnerable group. They’ve been described as “a special category of a worker” needing “special protection, especially in relation to contacts with public authorities.”

Such indiscrete incident and acts of local authorities have created fear and doubt in the mind of the seafarers on their willingness to work onboard ships.

There was a survey conducted by Nautilus international showing the different criminal charges or investigations, seafarers find themselves at risk of.  These are (in order or risk factor): Pollution, scapegoating for a third party, Incorrect Paperwork, Leaving the vessel in poor condition, injuring a person on board, Infringement of local laws, causing an incident relating to drug or alcohol, injuring a person on the shore side, cargo loss etc.

Moreover, the problems faced by the seafarers on being criminalized for an offence is in itself a matter of concern for them.

Seafarers are placed in detention without recourse to fair justice and representation in a foreign country where they don’t have much access to any sort of legal help, they don’t speak the language of the country, they cannot participate in the investigation, and they don’t follow up with the enquiry conducted thereof due to the cultural and language barrier.

Some of the well-known cases in which the seafarers faced Criminalization are The Prestige Case, Tasman Spirit in Pakistan, Costa Concordia case, the Sewol tragedy Ocean Centurion case etc.

Such incidents which cause pollution of sea or death of any person of a country due to the vessel are more in limelight but the minor incidents of harassment from the local authorities on the basis of “port regulations” are often “settled” amicably.

The renowned case of MV Prestige (oil tanker) was one such case of criminalization of seafarer due to oil pollution from the vessel. On 13 November 2002, the MV Prestige was sailing from Ventspils, Latvia to Gibraltar, carrying 77,000 metric tons of two different grades of heavy fuel oil. The weather got changed and it started to take on water from high waves. This caused a 50-foot hole on the starboard side. The crew was evacuated while the ship drifted within four miles of the Spanish coast and leaked oil.

The French, Spanish and Portuguese governments did not allow the vessel to dock to avoid pollution on their coastlines. As a result, after several days of sailing, the vessel split in half on 19 November in Portuguese waters. It sank 250 kilometres from the Spanish coast, releasing over 17 million US gallons (76,000 m3) of oil into the water.

Over 20 million US gallons (76,000 m3) of oil were spilt in total. The Prestige oil spill remains Spain’s and Portugal’s worst ecological disaster until today, causing significant damage to wildlife, environment, as well as the local fishing industry.

The court found the captain, insurer and owner of the tanker that broke up off north-western Spain in 2002 liable. The Captain Apostolos Mangouras was sentenced to 2 years of imprisonment by the Spain court founding him to be “reckless in his duty” and “failing to preserve the environment.” 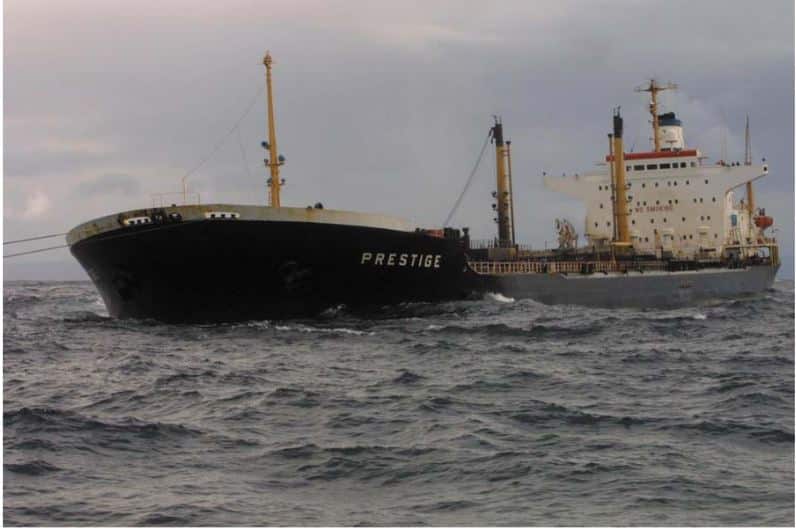 The MT Hebei Spirit oil spill was another major oil spill in South Korea making it the worst case of an oil spill in South Korea since 1995. On, 7th December 2007 a crane barge being towed by a tug collided with the anchored crude carrier Hebei Spirit, carrying 260,000 tonnes of crude oil. The collision resulted in three of the five tanks getting burst open and resulted in the leaking of around 10,800 tonnes of oil.

Upon detention and charges being framed on the seafarer, it is in their right to have a free and fair trial with proper legal aid and enquiry. The main concern is that they are found guilty until proven innocent which is contrary to the rule of law.

Therefore, to protect the rights of the seafarers against unjust criminalization upon a maritime accident the IMO (International Maritime Organization) came up with a bunch of guidelines in 2006 for fair treatment of seafarers.

These guidelines were for the –

To mention a few of the guidelines for seafarer protection against criminalisation are:

However, even after the IMO and ITF guidelines on the seafarer’s fair treatment most of the countries refrain from following them.

The seafarers today are still deprived of the basic rights which they deserve upon a maritime accident thereby rising a matter of concern for the entire shipping community to take up the matter seriously and work together for a fair and just trial process.

Despite all these rights given to the seafarers, it has been found that the rights of seafarers, as enshrined in the Guidelines, may often be subject to violation and that there is widespread concern among seafarers.

Upon his/her arrest the port state does not cooperate and communicate with all substantially interested states, ship owners and seafarers about his/her well being; the seafarer is not taken care of for his/her wages, food, accommodation and medical treatment; and often not allowed to communicate with his/her family, welfare organisation, trade union, embassy.

Moreover, it is also the responsibility of the seafarer state to fund the repatriation of their national seafarers following the aftermath of a maritime accident in instances where ship owners and the flag State fail to fulfil their responsibilities to repatriate.

It is of utmost importance for the seafarer to be aware of all the rights given to him/her by the IMO 2006 guidelines and this should be part of the curriculum for their competency exams.

Further, the Master of the ship should be Trained for Media Handling, as an additional qualification, until such time a person designated to do so takes over.

The master must be taught in advance how to handle the media for a while so that in the initial moments of the accident he does not issue any statement or share details of any documents which might be used against him or the seafarer as a statement in the court during judicial proceedings which will jeopardise his stand in the case.

There should be an adjudged transparency between the Master and the Complainant.

IMO has to play a major role in cognizance with Flag state, Owners and the operators as well as mangers.

Instead of going for a blame game of acquisition to Vessel Owner and Master, due diligence has to be exercised in trying to ascertain the root cause and before passing the verdict in the media.

Also, Criminalization cases cost a lot of money to fight. It can be well over US$250,000 in legal fees. The P&I Club help and do so to a certain extent but they are more for the ship owners. Therefore, there is a need for professional indemnity insurance for the seafarers for protection like doctors, lawyers and others have. There also arises a need for an association or a union that can provide such cover. 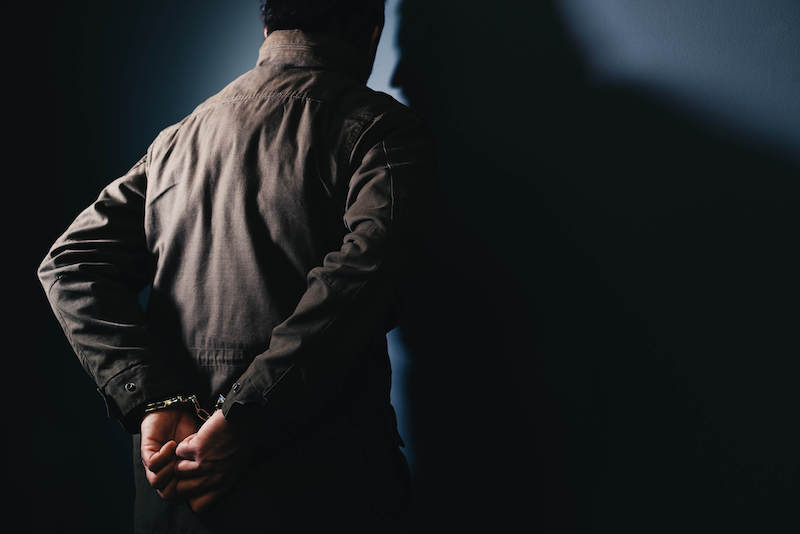 There is an “International Seafarers Welfare and Assistance Network (ISWAN) has a telephone helpline which manned 24/7/365 and has interpreters so it can assist non-English speakers.” There are various such Seaman Centre who also provide adequate help to the victimized seaman and help them with legal representation. Further, some shipping companies are quick to act and ensure their ship staff is well protected and the P&I Club is informed to take action through their local correspondent.

Thus, incidents that have caused damage due to the operational failure or negligence of the vessel staff or due to the vessel equipment or hull failure due to lack of maintenance or other means, which are not intentionally done by the ship staff needs to be tackled with training and counselling of the seafarer and not their criminalisation.

The Seafarers interest, fear and unwillingness to work in shipping industry due to the criminalisation need to be eradicated and their trust needs to brought back with IMO guidelines being adopted and followed properly all over the world.