You are here: Home › Marine Safety › How Team Meetings Help to Improve Safety and Efficiency of Ships?
TwitterFacebookLinkedInPinterestBuffer

Today, most Seamen live and work on board ships in a multinational and multicultural environment. Apart from the national flag ships, it is very common to see a mixture of two or more nationalities on ships these days.

With multinational ship crew comes differences in language, lifestyles, religion and culture. It is therefore not difficult to imagine that interpersonal conflicts due to above differences can create innumerable problems on board. Such conflicts are also one of the main reasons for stress among seafarers on ships.

But then not all ships have these problems. In fact the working environment on board most on the ships with multinational crew is very cordial and professional. But it cannot be said that such problems do not exist. The main cause of such problems is isolation and lack of communication among seafarers. 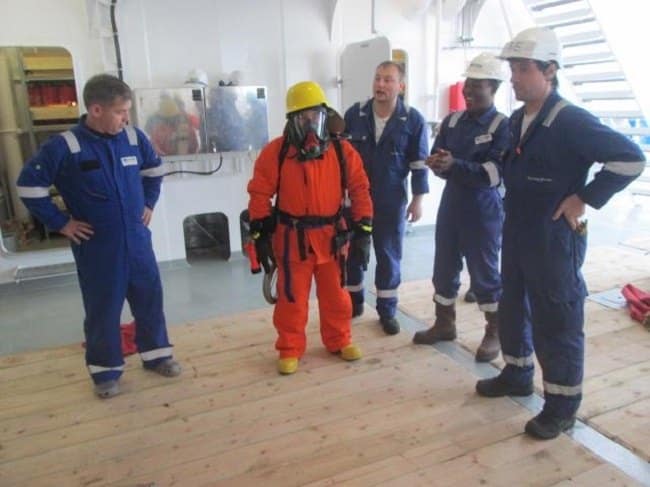 If one can remember olden days, the Master and Chief Engineer Offices were like mini-castles unapproachable to a majority of the crew on board and that was one great recipe for crew problems. Over a period of time with the management concept kicking in, ships became more professional and efficient. Yet we still come across so many ships which keep running into trouble every now and then due to crew problems.

A positive communication among two or more people creates positive vibes and improves overall efficiency of the ship’s team. One of the ways of bringing out this positivity is through regular team meetings. There are ships wherein these meetings exist only on papers, whereas on some it’s a regular feature.

Meetings between Head of the departments (HODs) and their respective teams, and meetings between small groups of crew before a task if undertaken, can yield extremely positive results. Besides the regular documented Safety and Management meetings on board ships, we should also have a briefing/meeting with all team members before the start of an event and a debriefing meeting after the completion of the event.

All ships conduct a variety of drills, which are generally a “wishy-washy affair”, ending up with some of the crew as lost as they were at the start of the drill. Instead, a briefing meeting can help in a variety of ways.

Let us see how a briefing-meeting with all crew can help before conducting an important event:

There is no doubt that after a briefing, all team members feel more confident and perform satisfactorily, both professionally and safely.

It may be possible that sometimes events such as engine room operations, bunker operations, cargo operations, drills, deck operations, picking up stores and provisions etc. do not go as planned and there are near misses which could have resulted in accidents.

It is therefore very important that after the completion of an on board job, a debriefing meeting is conducted; not with an intention of finding the fault but to find out what went wrong and why and what steps are needed to take corrective measures so that such events can be prevented in future.

It is usually a very healthy culture to have a safety meeting on board with all crew members. We have often seen that some crew members, usually those with reserved nature, rarely participate actively in such meetings with a fear of reprimand or out of fear of losing face or job or both.

Senior managers must encourage such crew members to speak freely and discuss their fears openly so that timely help and advice can save them from an impending disaster. Safety meetings are also an opportunity for the entire ship crew to share their experiences.

I remember on a ship belonging to oil major, each day after lunch, a brief safety meeting was organized with all crew, except watch keepers, wherein everyday one crew member would narrate an incident from his life involving an unsafe event. The event was then discussed with all crew and corrective actions were discussed.

On most ships that I have sailed on, I made it a practice for all top four senior officers to have their morning and evening tea together. This is also happening on most ships these days and shore managers encourage such informal meetings wherein a majority of ship’s problems find their solutions with all the foru senior officers who share a common goal of ship’s safety, efficiency and better interdepartmental relationships.

Some ships have management meetings with only the top four participating. Some do it with all the certified officers. However, it is always preferred to conduct management meetings with all certified officers to create an open forum, which brings to the surface existing deficiencies and shortcomings which could have been missed otherwise. With an open discussion it’s far better to push your message across.

I have always felt that when you are participating in any meeting do it with an open mind, avoid using the word “you” and try to be a good listener. You may be avoiding several conflicts with this approach. Always remember that a good listener will always turn out to be a better speaker, and vice versa!

Do you think team meetings can help to solve a variety of problems on ships? Do you actively participate in such meetings on board? Let us know in the comments below.