Home » Main Engine » What is a Brace or Strut for Marine Engines?
TwitterFacebookLinkedInPinterestBuffer

2 stroke marine engines are considered to be the world most powerful engines used on ships, some of them capable of producing power of 108, 920 horses. However, while running lots of engine vibration is produced. Engine vibrations can be extremely harmful to the engine and thus must be encountered immediately to avoid damage to the machinery, ship’s hull, and strengthening members.

In order to reduce such vibrations, different methods and systems are used, which includes de-tuners, thrust pads, chokes etc. Another method to transfer engine vibration to ship’s hull is to use struts or bracings. 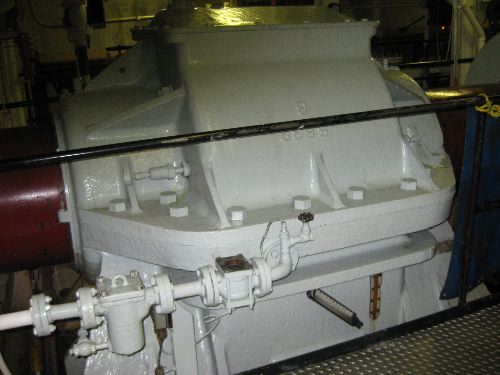 Vibration is naturally present in every mechanical machine because of the internal moving parts of the machine. In ship’s main engine, the internal parts are producing tremendous power by fuel combustion which produces vibration.

If the vibration level or amplitude increases more than normal, then following will result:

Engine strut or brace are stud like structure usually incorporated with hydraulic or mechanical systems to transmit engine vibration to ship’s hull.

One end is fitted at the upper part of the main engine and other end is attached at very stiff location in the ship’s hull. This strut or brace acts as a de-tuner which increases the natural frequency of the system, so that resonance occurs above the engine rotational speed.

Friction type strut is one of the common types used for 2 stroke slow speed marine engines. 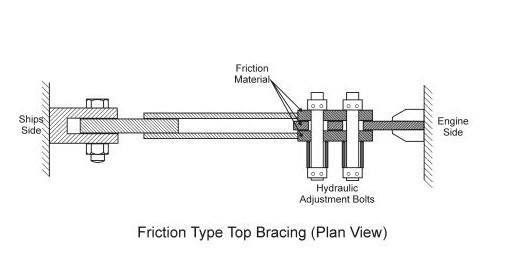 The working of these type of struts depends upon the friction between the pads that brace the engine at the top so that the resonances with critical orders are above the speed range of the engine.

There is a frictional grip which is responsible for the main functioning of the struts, which are hydraulically tightened.

Last but not the least, the tension on the hydraulic bolts must be regularly checked along with the inspection of the structure for any cracking especially around the welds.