The primary operation of an oil shuttle tanker is the loading and unloading of oil cargo at ports. During this process, a large quantity of lighter components evaporate from the oil. These oil vapours are technically called Volatile Organic Compounds (VOC), which are explosive in nature. VOC is also generated when the oil inside the tanks splashes while the ship is at sea. In order to prevent the gases reaching an explosive state, inert gas is used as a blanket over the cargo.

Since the generation of oil vapour will also lead to increase in the tank pressure, the cargo oil storage tanks are provided with vent pipes to discharge VOC to the atmosphere. The intention behind this is to maintain a constant safe pressure inside the tank; however, while doing so, a great amount of energy in the form of VOC is lost, which also leads to environmental problems related to air pollution.

Since VOC is a source of energy, same can be utilised as fuel for ship’s engine in conjunction with heavy oil or diesel. In this article we will discuss the general system which will be required to have a safe VOC fuel supply system for ship’s engine.

– Gas condensation system : The inert gas and the light VOC gas (methane and ethane) remain in gaseous form and are normally vented to the atmosphere. After cleaning, the VOC needs to be compressed in liquid form, which may involve several steps depending on the available technologies

– Storage tank : Once the VOC is converted to liquid form, it is stored in a separate storage tank. If the volume to be stored is less than about 300 m3, a pressurised tank storing the liquid VOC at ambient temperature and pressure of about 10-15 bar gauge may be used 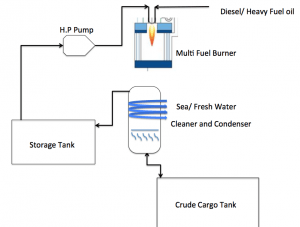 – High-pressure supply pump : For a marine engine, the fuel is delivered to the cylinder at high pressure for proper penetration and atomisation. VOC from the storage tank needs to be delivered at around 400 bar at a constant pressure, hence a high- pressure reciprocating diaphragm pump with quantity control is used to ensure a stable pressure at the engine

– A Preheating system : The pipes carrying high pressure VOC may accumulate ice on the outer surface in case of decompression of the pipes, involving flash-boiling of the VOC. To avoid this, a preheater can be installed which will heat the VOC to a temperature of 50 deg C before the engine entry point

– Fuel injection system on the engine: The preheated pressurised VOC is injected directly into the combustion chamber immediately after the injection of a small amount of fuel oil (8% of the oil amount at 100% load), which acts as pilot oil and ensures stable, safe combustion. The special VOC injection valves are operated by a mechatronic system which features computer control to allow for the greatly varying properties of the VOC fuel

By using the above mentioned components on an oil tanker ship, the energy of VOC which otherwise will be previously lost to the atmosphere can be utilised as fuel in running the main engine. This will not only improve the overall Energy Efficiency of the ship but will also reduce the fuel cost – a major aspect of ship’s operating cost.

Want to add more points to the article?