It was a century ago when shipping had transformed from “coal fuelled”to “oil fuelled”. A another hundred years later, transformation to a newer fuel source is making waves, only this time, it is to “gas”.

Driven by tougher international and environmental standards, (Liquified Natural Gas) LNG is being termed as the fuel of the future. Accordig to experts, large scale shipping is believed to be sourced by LNG in the near future. According to DNV, being “LNG Ready” could be the best option for many ships.

Higher marine fuel oil prices have made way to development of newer technologies based on cost and environment efficient fuels such as natural gas. Natural gas is a potential winner in terms of being environment friendly, safe, reliable and cost effective. When compared to oil, natural gas has become an important commodity with a key global energy impact. Due to the influential properties possessed by natural gas, it is the only alternative fuel which is believed to drive the future. Studies have shown that usage of natural gas or (Liquified Natural Gas) LNG as fuel has cut down the poisonous sulphur emissions or SOx significantly with a substantial reduction in carbon dioxide (CO2) and nitrox or NOx gases.

For Representation Purpose Only

LNG or Liquefied Natural Gas is super chilled and in liquid state when transported. Since it is already seen as a supplement fuel for a variety of segments, it can create an even bigger impact when used as ship fuel. Climate changes, current and future international shipping regulations, etc. are anticipated as costly laws which need to be complied at various stages and (Liquified Natural Gas) LNG fuel is expected to support in the process.

LNG fuelled ships are able to emit almost zero sulphur oxide emissions, which is appropriate when the regulatory 2015 ECA’s or Emission Control Areas come in action. Due to lesser carbon content in LNG, release of the harmful carbon dioxide gas is reduce by nearly 25 percent. With the present market value of LNG in commercially viable regions such as the US and Europe, LNG could be offered at  a competitive price when compared to heavy fuel oil or HFO and even more attractive when compared to the low-sulphur gas oil, as fuel on ships.

How is the transformation taking place?

Major container liner companies such as CMA-CGM are working towards developing future ships which are (Liquified Natural Gas) LNG fueled  along with implementing other technologies to reduce harmful ship emissions. This technology can only be developed when a solution to LNG refueling has been concretely developed. Wartsila, a major ship engine maker has developed and completed conversion from oil-run engines to LNG powered. Such duel fuel engines have now been implemented in several cargo ships.

M/V Bit Viking is considered the largest of the vessels afloat and in service with approx. 25, 000 dwt powered by LNG. Similarly, M/S Viking Grace is the largest passenger vessel to use LNG fuel. After almost a decade in development of LNG technology, presently, approximately 30 floating vessels are (Liquified Natural Gas) LNG fuelled and servicing the European waters. Tugboats and high speed ferries are next in line for the conversion to LNG. 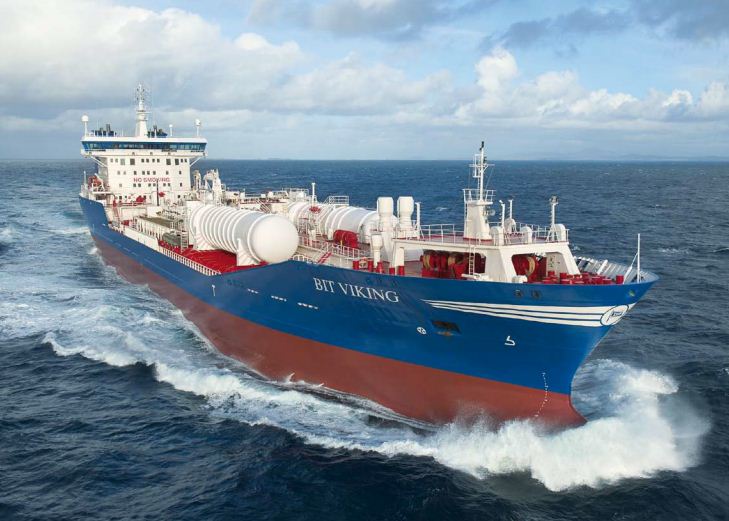 Some companies are building hybrid ships ( Read hybrid ferry and hybrid car carrier) that are able to run on both oil and gas as fuel. The technology will see ships to be powered by natural gas for upto half way through the voyage and still be capable to switch over to bunker fuel for the remainder of the journey. Idea will be to use natural gas as the primary source of power and bunker fuel as a secondary / emergency one.

Disadvantages of Using LNG as Fuel

A potential disadvantage to using LNG is space. Since gas weighs more, volume-wise it requires more space as compared to bunker oil. The farther the journey, the equally larger amount of storage space is required. So far, tanks are designed to be built in the cargo spaces of the ships for using gas as fuel. This is a major setback for the ship operators in terms of freight earned by the cargo. Engineers and architects are working towards developing systems that would make room for storing (Liquified Natural Gas) LNG. This could be anywhere on the vessel, above-deck, in the superstructures, beneath the cargo containers, astern of the vessel, etc. and this would also call for extra insulation, piping and steelwork as far as construction of the vessels is concerned. Moreover, Hyundai has now developed dedicated LNG storage tank.

Strict pollution regulations mean ship operators will be also installing more expensive units to cut emissions such as scrubbers.  Another drawback before introduction of (Liquified Natural Gas) LNG is the availability of the fuelling stations, as these may have to be set up at major ports or at regular bunkering points, feasibility studies and reports may have to be attained.

Research has been progressive regarding extraction of natural gas trapped in rock formations around the globe. Future for low sulphur fuel oil looks bright and at the same time demanding with refineries falling short of delivering upto standard requirements. Ship operators are definitely going to spend from their nose with the implementation of stricter global laws and safety standards. Due to this, use of low-Sulphur fuel oil or marine diesel oils will raise the shipping companies’ operating costs by four folds. This is slowly making the owners realise the value of natural gas as a prime fuel for ships engaged in long voyages. The dynamics of the ever-increasing global trade and transportation industry are working in favour of investing in natural gas for fuel on ships.

Before taking a call for the change-over decision, ship operators need to identify the scope of transition with introduction to dual fuel system, price comparison of the commodities and the areas where their ships would ply. This means ships that frequently pass through the ECA and SECA’s or the emission control areas would be depending on the rise in (Liquified Natural Gas) LNG fuelling technology.