Home » Marine Environment » How Shipping Has Become a Great Threat to Whales?
TwitterFacebookLinkedInPinterestBuffer

Shipping and its impact on whales has long been under the critical scanner of cetacean crisis. A large number of whales have been killed in the past as a result of collision with ships and other offshore vessels. More authoritatively, shipping activity has become more of a menace than just a mere threat to the whales, especially for those residing in the North Atlantic.

Even though the exact death enumeration or injury of whales from ship collisions or underwater noise is well beyond any feasibility, a number of institutions have taken a step forward to quantify the issue and help provide mitigation measures. 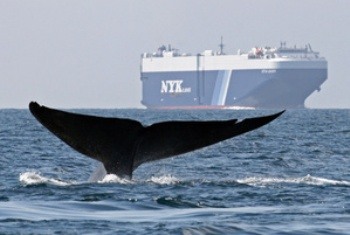 The damage to whales as a result of ships is twofold –

While underwater-noise-pollution remains a scourge, endangering whale lives and generations, collisions with ships seem to be a greater threat, particularly for The North Atlantic right whales, whose primary habitat happens to be the high-traffic waters off the east coast of the USA and Canada. They, for some reason, do not anticipate large ships with dread or anxiety and seldom make any effort to avoid them, which ensue death at large. Vessel operators sometimes do not bother to slow down their ships in high-density areas and also fail to heighten their visual awareness for possible whale presence.

Apart from right whales, other most affected species are the fin whales, humpback whales, sperm whales and grey whales. The damage because of collision with ships includes – fractured skulls, jaws, bones, vertebrae; deep propeller wounds and long, parallel cut marks on the dorsal aspect, into the insulating blubber. 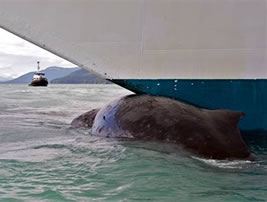 In May, 2012, a blue whale was found floating dead, off the southern tip of Sri Lanka – its tail fin tattered from the impact with a ship bow. Similarly, several incidents have been reported wherein the whales have been killed and remained stuck on the ship’s bulbous bow.

Shipping as a threat to whale mortality is not a new phenomenon, but has been in the records since late 1800’s. However, during the 1950-1970’s, with the increase of ship velocity, the damage caused as a result sprung up. According to a report by Kraus, between 1970 and 1989, 20% of the northern right whales, found dead off the eastern United States and Canada, had severe physical injuries with large propeller slashes, indicating that they were hit by large ships.

However, estimating the number of whales killed from shipping somewhat lacks clarity or distinctness, as because in many cases the incident might go unnoticed or unconfirmed. Even if a ship does not kill a whale at first strike, the hit may leave grave injuries. In that case, whether or not a collision kills a whale, can only be recognized by flensing carcasses to its bone. 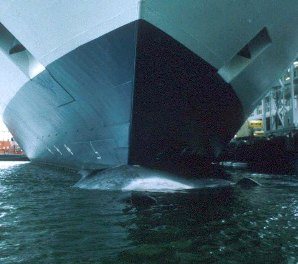 The most common methods to quantify the death roll includes – observing the hit directly and examining whale carcasses floating on the waters or washed up on the beach, found to be evidence of ship collision.

According to Researcher Scott Kraus of the New England Aquarium, the underwater noise produced from ships trigger significant drop in cetacean stress hormones, which could be held directly responsible for vulnerability to sickness and compromising procreation of their species.

Studies suggest that the sounds of ship’s propellers, military sonars, or explosions during oil and gas explorations and those used by whales for communication, co-exist in the same frequency range of 20 to 200 hertz. Over the long haul, this results in constant elevation of glucocorticoids which can lead to stunted growth and an impaired immune system.

The International Whaling Commission (IWC) has addressed the issue of whale killing because of shipping and is working towards an efficient way to reduce ship strikes by developing a standardized global database of ship and whale collisions, to help identify high risk areas, and risk factors for determining mitigating measures.

The U.S. National Marine Fisheries Service (NMFS) has published a “Final rule” to implement speed restrictions to reduce the threat of ship collisions with right whales in the North Atlantic, which is supposed to be effective from 9 December 2013. One of the many whale congregation areas in the Great South Channel, should be avoided, by the ships or large vessels, through designated traffic areas.

National Oceanic And Atmospheric Administration has published a compliance guide for Right Whale Ship Strike Reduction Rule, with migratory routes and calving, nursery grounds, where it says, at certain locations, 65 ft / 19.8 m (or more) long vessels must maintain a speed limit of 10 knots.

International Maritime Organization (IMO), recently, in response to the US proposal of Area to Be Avoided (ATBA) in the Great South Channel, announced that the shipping lanes heading towards the hustling ports of California will be adjusted effectively from this year.

Also, the Great Whale Conservancy (GWC) has drafted a petition as part of their protect Blue Whales from ship strikes campaign, in the North Pacific and is encouraging everyone to share and spread the knowledge, before it is sent to the Obama Administration by April 13, 2013 – The Earth Day

The Smithsonian Tropical Research Institute recommends ship’s traffic patterns and speed limits be revised in the Gulf of Panama to minimize the ship collision threat for humpback whales. According to them, there should be a two-way vessel Traffic Separation Scheme, where each traffic lane will be of 2 nautical miles width, with 3 nautical miles of open water separation.

Alternative shipping routes must be immediately identified and adhered to, especially during the migratory periods, when marine life could be heavily impacted. It has also been noticed that the nursing and juvenile right whales are more susceptible to being hit by a ship. Hence, their habitats are with greater collision risks and are better be avoided.

A free app for iPhone and iPad, Whale Alert – Ship Strike Reduction for Right Whales, was developed by EarthNC, in association with several government agencies, NGOs, non-profit conservation groups, private sector organizations and academic institutions to benefit conservation of right whales. The GPS based app derives information from automatic passive acoustic buoys and sends an alert to the vessel operator, of probable North Atlantic right whale presence in the shipping lanes of the Stellwagen Bank National Marine Sanctuary. It can also recommend alternative routes, by depicting areas-to-be-avoided and thus, reduce the likelihood of ship-whale collision.