A small cement carrier with a crew of eight was loaded with cement and underway across the North Sea on a passage plan that brought the vessel through the Pentland Firth. Having spent 24 hours heading into deteriorating weather and increasingly heavy seas, the Master first reported that there would be a two-hour delay to the arrival time at Liverpool bar buoy. The next day, in consequence of increasingly bad weather, his report stated that there would be a further 10 hours delay to the arrival time.

As the vessel entered Pentland Firth (figure below), it was on a heading of 270° (COG of 272°) and SOG of 10.6kt. Once inside the Pentland Firth, the vessel was sighted by the crew of a nearby ferry. The cement carrier appeared to be upright and making slow headway, pitching heavily into the large waves. Later that afternoon the vessel’s AIS transmissions ceased. The data from the last received transmission showed a heading of 239°, a COG of 276° and SOG of 6.3kt. Such a SOG, however, would have meant a speed through the water of less than one knot, rendering the vessel unmanageable and at the mercy of the ferocious oncoming waves. 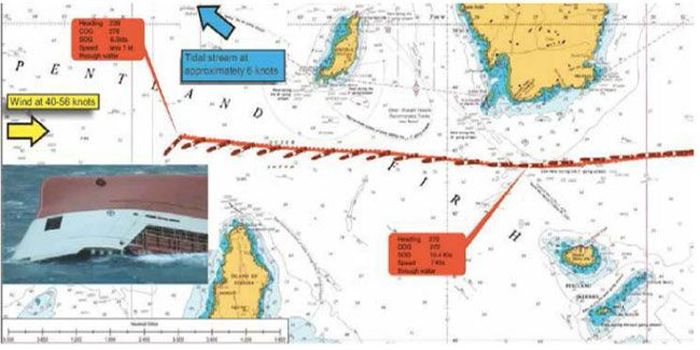 The hull of the capsized cement carrier was spotted and reported to the local coastguard 25 hours later. The damaged vessel soon sank. Search and rescue (SAR) activities were undertaken, but no surviving crew members were found.

The official accident report found, among other things, that: