A new mate joined a small inland passenger vessel for his first day of work. That same day, with the new mate (OOW) at the wheel and the Master guiding him, the vessel was navigated on a typical day cruise that lasted one and a half hours. Later that same day, the vessel embarked on an evening cruise, following a different route than the afternoon cruise.

Under the master’s guidance, the OOW was at the helm again for most of the two hour cruise, all the while learning the various courses and alterations. The next day in the ebbing tide the vessel left for a harbour cruise following the same route as that of the previous afternoon; the OOW was at the helm and the Master remained on the bridge but was doing paperwork and making phone calls.

As the OOW continued to steer the vessel, the Master turned periodically and looked out the window. At one point, the OOW asked the Master if the alteration to port could be initiated. The Master looked out, then agreed; the OOW then altered to port. Over the next four to five minutes, as the vessel crossed the channel in a northeasterly direction, the OOW searched in vain for the leading lights, normally between two anchorage buoys, indicating the secondary channel. He was navigating visually, not utilising the bridge navigational equipment or charts. 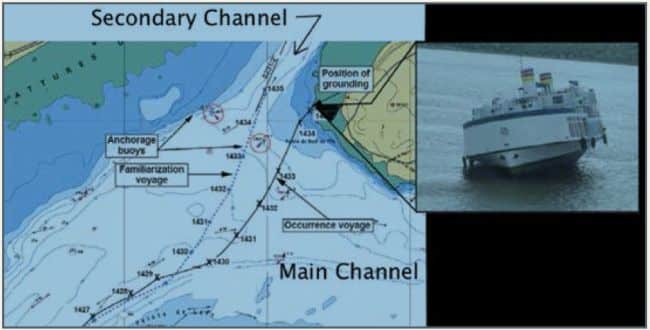 While still looking for the leading lights, the OOW glanced at the echo sounder and noticed that the water depth was decreasing. The vessel was making approximately 10 knots and a course over ground of approximately 027°. He then glanced at the ECS and alerted the Master, who quickly ordered the rudder hard to port. The OOW put the helm to port but at the same time the vessel struck the river bottom and remained grounded. Some of the findings and lessons learned from the official report were:

‘Ever Forward’ Container Ship Successfully Refloated After More Than A Month
Containers To Be Unloaded From ‘Ever Forward’ After 3 Weeks Of Being Aground
Ever Given’s Sister Vessel Runs Aground In US, Almost After A Year Of Suez Canal Incident
Captain Sentenced To Three Years In Prison For Grounding Vessel