The National Transportation Safety Board completed its investigation of the May 16, 2019, accident involving the double-hulled tanker American Liberty and several moored vessels, barges and wharfs along the left descending bank of the Lower Mississippi River from miles 139.5 to 138.7 near Reserve, Louisiana.

One serious and three minor injuries were reported in connection with the accident that caused a reported $40.5M in damage. No pollution was reported.

“While the NTSB did not issue any safety recommendations in our report, that does not mean there are not life-saving lessons to be learned from this accident,” said Morgan Turrell, Acting Director of the NTSB’s Office of Marine Safety. “There could have been a very different outcome in this accident, and failure to learn from it could cause a similar and potentially deadly accident to happen.” 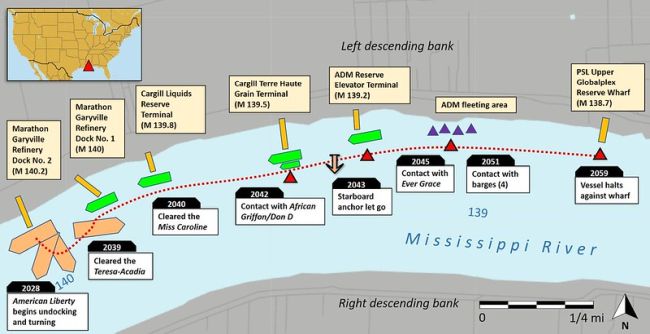 The accident happened while the river was at major flood stage with the Baton Rouge, Louisiana, gage reading 43.6 feet and the Bonnet Carré Spillway at mile 128 reopened six days before the accident. The current was 6.2 knots.

The American Liberty was on its normal route, loading petroleum cargo at the Marathon Petroleum Garyville, Louisiana, Dock No. 2, and sailing to Tampa Bay, Florida. There were 23 crew members aboard.

Investigators found the American Liberty’s Voyage Data Recorder captured the master-pilot exchange, which both pilot and master told investigators was satisfactory but not comprehensive. Both told investigators they shared an understanding of how the undocking maneuver was to be executed, but the exchange did not address how far the vessel was to be off the dock when the ship was to start turning, when the tugs were to be let go, or any other precautions that might be necessary in the faster-than-normal river current. Although the master and pilot expressed current as a known concern and challenge, the master-pilot exchange did not address challenges or precautions from the fast current.

The master said everything was normal as they were coming off the wharf, but the current caught the vessel as they tried to go ahead and they could not gain enough headway in the river and slow the rate of the turn. The pilot said he did not get the turns for slow ahead and the current set the vessel toward the wharfs, but he had not looked at the rpm and rudder angle indicators to verify if his commands were carried out.

Investigators also determined that both tugs should have been used alongside the American Liberty until the undocking maneuver was completed and the pilot had established control of the vessel in the current.

The NTSB determined the probable cause of the accident was poor bridge resource management and miscommunication between the pilot and the master, which led to the bridge team’s delay in carrying out an engine order, which delayed the American Liberty in attaining sufficient speed to conduct an undocking maneuver. The decision to release tugs begore the undocking maneuver was complete, contributed to the accident.