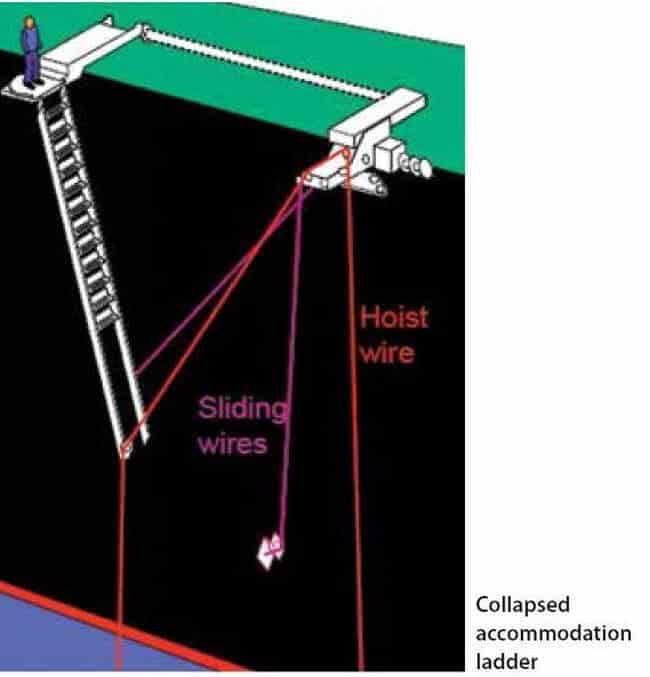 An inbound container vessel had just picked up the pilot. Two crew were on the upper deck preparing the port accommodation ladder prior to mustering at their mooring stations. Although they had brought two life vests on deck with them, these floatation devices stayed on the deck as they went about their work.

The hoist winch was tested by lowering the accommodation ladder approximately 1 metre and then slightly raising it. It was then lowered approximately 3 metres to allow a crew member to walk under the davit frame. A crew member stepped on to the upper platform and proceeded to the lower end where he rigged a section of collapsible handrails. He then went to the lower platform to make the rails secure while another crew member secured the safety ropes around the upper platform.

Suddenly, a loud bang was heard followed by a whirring sound as the ladder fell rapidly towards the sea. The lower ladder broke away and fell into the water, taking the attending crew member with it. The upper
section of the ladder was left hanging vertically down from its upper platform hinges with the hoist wire dangling from the davit.

A crew member alerted the bridge via VHF radio and then ran aft to look for the victim over the stern. A tug was close by, but there was no sign of the victim. The vessel was in the relatively confined waters of the port and making between 5 and 6 knots through the water. One of the attending tugs and the pilot boat were assigned to look for the victim, as the vessel was constrained by the restricted water. The victim was spotted about half a metre below the surface of the water and recovered by the pilot boat crew some 10 to 15 minutes after the event, but there were no signs of life.

The subsequent autopsy determined the cause of death to be ‘drowning with blunt force injuries’. The victim had suffered blunt force injuries to his head, neck, chest, back, abdomen and legs, resulting in a broken right femur, fractured ribs, multiple bruising and abrasions. These injuries were not considered to be fatal.

Real Life Incident: Steering Failure Ends With A Bump
Want to share your tips and advice? Got questions? Visit the community forum to ask questions, get answers, meet people, and share your tips!