A ship designed to meet extreme working conditions has to manage risks in an effective manner. One way of making sure that the vessel is capable of operation with a fair degree of reliability is by ensuring the various systems onboard the vessel are redundant in certain aspects. In this article, we will take a look at modern day dynamic positioning systems and become familiar with interesting terms associated with these designs.

Redundancy is said to be the hallmark of an excellent evolved design which hopes to tackle system failure. It is the ability of a system to regain or maintain normal function under at least a single mode of failure.

Take the example of an organism’s genome which has the ability to function normally most of the time even in the event of an accidental change in its local structure.

Ships are highly redundant structures specifically because of this reason. Any adverse condition at sea causing some local damage does not sink the entire vessel. However, today we shall focus on another area where system redundancy plays an important role i.e. manoeuvring.

Dynamic Positioning or DP systems are a combination of computer-based controllers and ship’s primary and secondary propulsion and manoeuvring devices, which are responsible to maintain the position and heading of a vessel in given sea condition.

Basically the idea here is to install multiple components to safe guard against failure, while ensuring that their working is based on alternate principles and means of operation (also called orthogonality). It must also be noted that connections between systems are kept minimal to ensure that failure effects don’t propagate across them (called separation).

These systems use data from the ship’s position reference sensors, wind sensors, gyrocompasses and similar devices and the data is used as an input in the feedback control loop system which helps in manoeuvring the ship. DP systems are not strictly restricted to ships only, and are often used on offshore drilling units, submersibles and semi-submersible vessels.

According to the International Maritime Organisation (IMO), three classes of rules have been developed for DP vessels. They are characterised by varying degrees working conditions and modes of failure. Classification societies like the Lloyd’s Register of Shipping (LRS), DNV-GL, ABS have their own class nomenclature.

However, the idea goes this way:

Under these, there are certain aspects that are positively considered for review of the DP systems like general arrangement, worst case conditions, marine power plant configurations, allowable power losses for different failure modes, environmental conditions (sea states, wind speeds) among other things. During vessel operation, the systems are required to ensure that work in progress is safely completed in the event the DP systems are working in single failure mode. However, the ‘termination times’ as they are called can vary and so does the DP system design.

Modern day DP systems are capable of ensuring superior vessel operations even in the harshest of conditions. They are extensively used onboard complex offshore installations which require both accuracy and precision like pipe-lay operations, umbilical-lay, heavy lift activities, etc. This means that there will be a fair amount of duplication of the active positioning systems onboard the vessel (Sometimes called critical redundancy). To get some idea, here is a table of features of the various DP systems as identified by the American Bureau of Shipping (ABS): 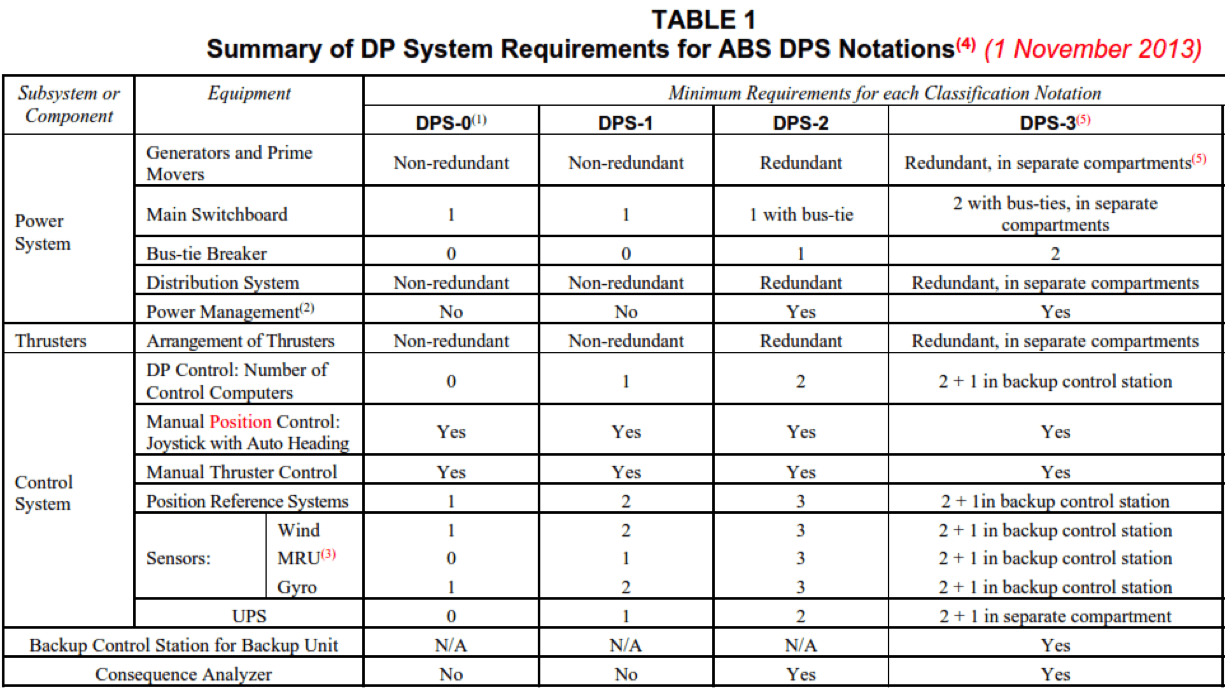 Interesting to note that DP systems are not solely concerned with station keeping and controlled manoeuvring operations as may be initially perceived, but are also about how the vessel would perform in a given condition taking into account the environmental conditions, failure mode occurrences. And this is why vessels are chosen based on DP capabilities for performing high-risk operations (also called suitability).

Coupled with the proliferation of technological applications aboard modern day vessels and offshore installations, it can be safely assumed that DP technology would definitely find a place among integrated automation technologies in the future.

What are your views on the modern DP vessels? Let’s know in the comments below.

What is a Dynamic Positioning Ship?