Carlos Fischer is one among them.

Named after a famous Brazilian agriculturist, the Carlos Fischer is one of the biggest fruit juice transiting carrier ships in the world. Put into operation in the year 2002, this orange juice concentrate tanker has more than re-defined the vessel system for carrying liquids during it’s over 10-years of service. Under the ownership and operation of one of the Brazilian conglomerate Grupo Fischer’s auxiliary corporations, the Aleuropa, the Carlos Fischer was built at the Kleven Florø shipbuilding yard. Her sister vessel, the Premium do Brasil was also constructed at the Kleven Florø yard and was launched in the year 2004. Carlos Fischer is capable of transporting up to 37,000t of fresh orange juice from Grupo Fischer’s orange orchards in Brazil to its plants in the eastern USA, Belgium and Japan. 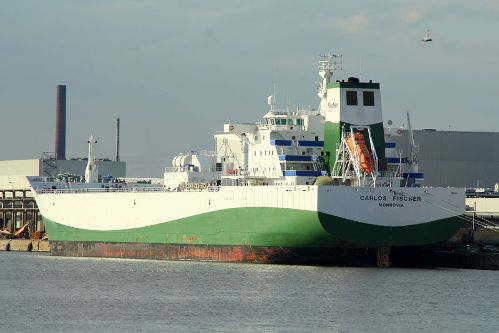 The most noteworthy characteristic of the Carlos Fischer is its storage module devised to successfully transport the intended cargo. Considering that the vessel carries juices, a perishable commodity, its refrigeration and storage system is state-of-the-art and specially built to ensure the longevity of the cargo transited. Four refrigeration compartments house four-juice storage tanks each, providing a total storage area of over 37,000 tonnes of juice. The juices which are stored at a temperature of 0 ̊Celsius, in order to preserve the quality, are transferred from the pipelines into the containers at a temperature of -10 ̊Celsius, in a slush-like state instead of being completely liquid.

Four refrigeration compartments house four-juice storage tanks each, providing a total storage area of over 37,000 tonnes of juice. The juices which are stored at a temperature of 0 ̊Celsius, in order to preserve the quality, are transferred from the pipelines into the containers at a temperature of -10 ̊Celsius, in a slush-like state instead of being completely liquid.

Cylindrically shaped, the storing tanks are deeper in depth and taper on their top. The depth ensures that at the time of relieving the cargo, no residual juices remain in the tanks. The tapered top-portion of the storing tanks is equipped with various technological systems like temperature and radar gauges and nitrogen piping. Along with three electrical compressing systems installed in the deckhouse, the refrigeration for the storing tanks is provided by way of ammonium and brine. When shipping the cargo, brine from the evaporator room passes through heat exchangers in each hold, while large fans will help air to move to all parts of the insulated holds.

The refrigeration compartments are suitably constructed and placed in such a way that air-passage is amply provided to them and in-turn to the storing tanks. Surrounding the refrigeration compartments are beams that form a part of the movement and ravel system for the crew of the vessel. In three of the cargo holds, the free-standing tanks are positioned in two sets of pairs either side of the centre line. The boundaries of the cargo holds are insulated with a panel system developed from polyurethane foam slab.  On one side, it features a galvanised steel protective jacket and polished aluminium facing towards the hold. The forward hold arranged separately due to the requirement for a fine bow shape and the tanks are placed in a manner that one is fitted to port and one to starboard, while the remaining two further forward on the centre line.

Since the cargo being transported by Carlos Fischer needs extra care, the pumping and piping systems abroad are complex and all surfaces that are in contact with the liquid cargo have to be kept in an aseptic condition. Thus, the pumps are placed at tank top level between the cargo tanks and these facilities include much larger diameter pipes and also a special type of electrically driven displacement pump. While electrically driven displacement pumps are used for transporting concentrated juice, electrically driven centrifugal pumps are being used for fresh juice. The surfaces of the tanks and pipes that come in contact with the juice during the transportation process are made of polished stainless steel and are free from any crevices that will allow bacteria to grow. Similarly, the design includes flanges sealed with O-rings to avoid cavities and also the entire processing system systems lead to a definite lowest point in order to drain the compartment completely. 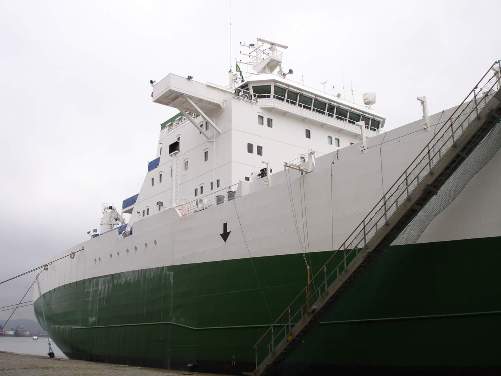 The use of protective nitrogen helps the operator to provide oxygen to prevent the juice being oxidized. And, the vessel uses propeller type tank stirrers to make sure the circulation of tank contents when the natural juice is being transported. In addition, the vessel is also equipped with a tank and cargo system cleaning outfit that including tank cleaning machines. After emptying the tanks, as part of the cargo handling system, nitrogen replaces the tank space on the return voyage.

Design and other Specifications of Carlos Fischer

Carlos Fischer, which measures 204.85 metres lengthwise with a breadth of 32.2 metres and a draught of 11.4 metres, features a GRT of 33,005 and has a carrying capacity of 43,000 tdw. Powered by a Wärtsilä Sulzer 7RTA 84C main engine, the carrier ship offers speed almost touching 21 knots and is equipped with pitch propelling and thrusting systems. Categorized under the reputed Germanischer Lloyd classification, the juice carrier also boasts of hi-tech navigational gizmos like a gyrocompass, radar systems, electromagnetic logging system, compass and a VMS – Voyage Management System. Delivered by Litton Systems, the bridge navigation systems also include ECDIS planning station, autopilot, rudder indicator, Skipper echo sounder, Furuno Navtex , Taiyo weatherfax,  DEIF watch and unfitness alarm system, among others. A crew of 30 members can be easily housed within the vessel, equipped with recreational amenities like a gym and a swimming pool. For the safety of passengers, the Carlos Fischer has free fall lifeboat launching over the transom stern.

The careful design and construction of the vessel have helped Carlos Fischer to achieve its credible position in the international domain of carrier ships. During the construction of the vessel, the shipbuilder Kleven Florø worked with Marintek in Trondheim to perform tank testing and hull form optimisation. One of the challenges regard to design and tank testing was to reconcile the high deadweight of 42,500t as well as large cargo volume with the speed requirement. However, the efficient shipbuilding method helped Kleven Florø deliver a strong and slim vessel that meets the requirements of its customer. In addition to Marintek, Kleven had also sought the help of a Romanian shipyard for the construction of the hull. During the construction, the last 5 metre of the 204.85 metre long vessel was added separately since the building dock at Floro has a length limit of 200 metre. Also, the sections of the hull had to be cut out to install the stainless steel tanks, which are freestanding and do not form part of the structure, in the holds. In 2016, Carlos Fischer underwent an extensive dock and repair work at the facility of German Dry Docks.