In the ever changing times today, just as much benefit can be drawn from the maritime industry, the same number of threats is faced by the industry every single day.

Maritime security, may it be concerns related to marine environment or the rising piracy activities around the world, is put into jeopardy by a number of factors such as 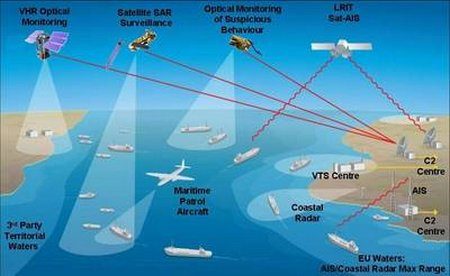 These are only some of the threats faced by the industry and the maritime professionals working out on seas every single time. Of these, some are beyond human control like an unexpected storm, whereas some are man-made and can be easily controlled. When a storm comes, there is nothing one can do to stop it rather than finding ways to escape it.

However, there are some threats that can be detected and with suitable efforts, crew can be protected from them. Such Types of threat are piracy at sea, loss of tracks of ships etc. For any kind of threats faced by ships today, however, there is one coherent solution- earth observation satellite services.

Satellite services are not new by any means. They have been around for a long time now, having helped humans understand earth and atmosphere in a way not possible otherwise. Sure that makes them very useful but when put to a little more use, they can reveal much more than secrets of orbits of various planets. Special class of satellites based on principle of remote sensing can be extremely advantageous when it comes to making maritime industry safer.

Satellite services can be extremely useful when it comes to providing protection to shipping industry against a danger of natural disaster that they constantly live in. These meteorological satellites can be used to update ship’s crew constantly about their route and chances of hitting an unfavorable situation.

They can closely monitor clouds, ocean currents, energy flows, ice covers over the sea and movement of storms. This information can be used to warn the ship about any such approaching natural disaster so that preventive measures can be taken appropriately.

Oil spillage happens to be one of the major risks to maritime security. Regions of excessive oil spill can turn dangerous for ships passing through those regions, endangering lives of not only marine animals of the area but also of everyone present on those ships.

With geospatial satellites that can view the earth’s surface, both land and water bodies very closely, sometime even up to few centimeters of surface can study the ocean surface constantly. They can also study color differences in the images of oceans taken constantly from the space.

These images can further be studied and quickly relayed to other regions through the interoperable geospatial arrangement. Spot imaging along with an efficient system of interconnected centers on earth can make any information collected anywhere on the earth available to a broad community even in less than two hours. The real time imagery through spot imaging can be used to supplement the already available material for marine protection. This can be extremely helpful in averting serious accidents and improving maritime security a lot.

Keeping a constant track of vessels is very important both from economic aspect and from the point of view of safety of mariners on that vessel. Vessel tracking systems based on satellite sensory technique makes basis for the satellite based GPS monitoring system that helps in keeping a constant tab on position of vessels at all times.

This helps in knowing the exact location of the vessel. However, in case of a ship being lost on the track, satellite tracking of the vessel through AIS happens to be the most efficient way of finding the location of a lost vessel. Coast guard security can contact a satellite data company any time to seek information of any vessel. They work as a two way communication system enabling lost vessels to contact anyone through these satellites.

Piracy at sea is a greater danger to ships than many others. Recently, the incidences of maritime piracy have increased manifold. Report on piracy at sea says that this is mainly due to inadequate ways of combating maritime piracy. However, satellite services can be used as one major way to lower this number.

Satellite imaging can detect any incoming inhospitable objects. This, when combined with other anti encounter measures taken on the ships can increase security against maritime piracy to great extent. Geostationary satellites that allow remote sensory imaging in NRT (near real time) can relay information to different parts of the world.

The interconnected systems between coast guards along with security measures like onboard security, armed personnel, deck patrolling etc can together make an efficient security system. The report on piracy can begin to show a downfall in graph of pirate attacks with use satellite services to combat it.

You may also like to read: The Long Range Tracking and Identification (LRIT) System

IMO: Promoting A Whole Of Government Approach To Maritime Security
IMO Appoints Special Advisor On Maritime Security
No Information On Kidnapped Seafarer From MV Tampen After 11 Days Of Pirate Attack
Gulf Of Guinea Is World’s Piracy Hotspot With 95% Seafarers Kidnapped