Exhaust Gas Cleaning Systems (EGCS) or commonly known as scrubbers have been a major retrofit on ships and a hit among the shipping companies worldwide as it is expected to save a lot on the fuel expenses since the new (global) fuel regulations fall into place starting January 1st, 2020.

With the pandemic falling right in place and the tanker market soaring high with the new current levels in the East and the West, majority of the shipping companies are getting the ships installed with scrubbers, mainly from China, as it is comparatively cheaper and the slots are apparently available.

Related Reading: A Guide To Scrubber System On Ship

Scrubbers do cost a fortune to the companies, but they probably have evaluated the recovery long before we imagined, thus it becomes apparent that for the next few years we will look at scrubbers as an integral part of the ships and not retrofits anymore.

Well, till date we had a brief idea about the construction of scrubbers but a little about the operations, which would be the focus of this article, including the intricacies, the components therein and getting an insight of the open-loop scrubbers.

Well, IMO wanted to lower the oxides of sulphur with a little importance given to CO2 emissions as well, thus scrubbers measure the SO2/CO2 ratio with SO2 in ppm and CO2 in percentage which is measured by the CEMS Continuous Emission Monitoring System.

This kind of scrubber is something very similar to the IG scrubbers which we have all been working on since the beginning. In this exhaust gas is being washed down with wash water and then discharged into the sea. 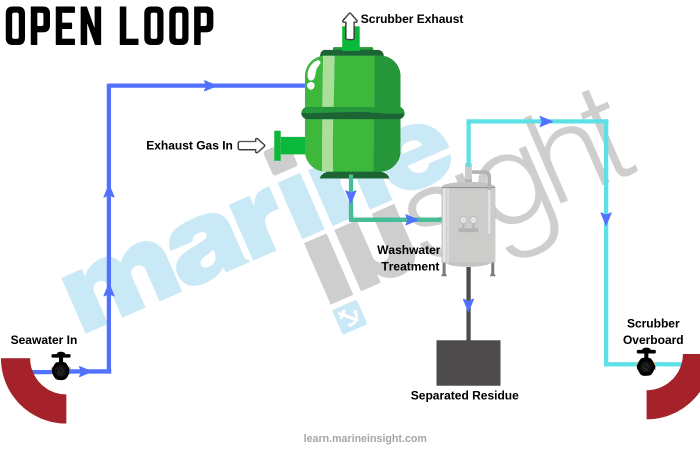 This type of scrubbers is used where the seawater alkalinity is either high or moderate as they use the natural alkalinity of seawater to absorb the Oxides of sulphur from the exhaust gases and consume very less power as only a pump is required to drive the entire operation.

Now, when the fuel regulations fall into place the wash water too has new regulations before it could be discharged into the sea.

A lot of European countries do not accept the wash water to be discharged into the sea, thus the vessels will have to change over to compliant fuel when sailing in the territorial waters and calling the ports of such countries.

On the contrary, the closed-loop scrubbers are used where no discharge is allowed or seawater is of very low alkalinity. Further, the exhaust gas is washed with fresh water mixed with a neutralizing agent i.e 50% of NaoH, Na2CO3 or MgO. 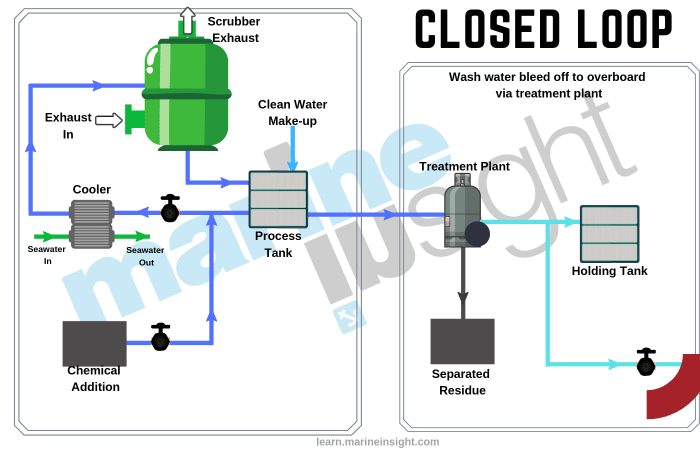 The residue is then led to a holding tank or a sludge tank which could be discharged periodically depending on the voyage of the vessel. These type of scrubbers consume a lot more power than the open-loop scrubbers but are ideal for the stringent 0.1% sulphur emission regulations in the ECA.

Hybrid scrubbers are a combination of open-loop and the closed-loop scrubbers. 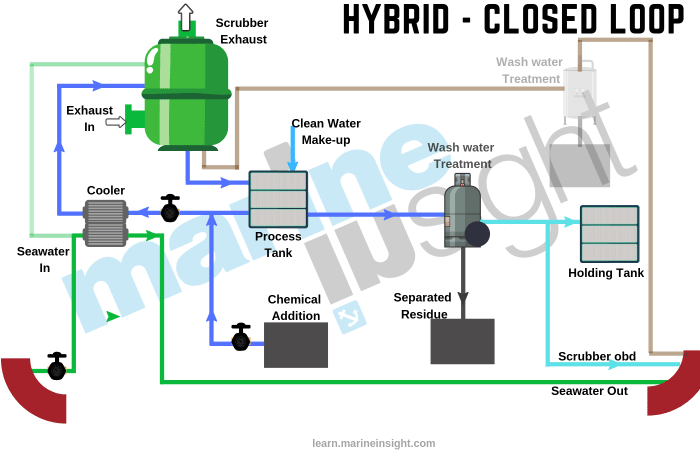 A simple layout of scrubber details that it has two process pumps which could also be called as scrubber pumps, one out of those pumps is an auxiliary and hence either could be used.

The wash water is pumped to the scrubber through light weighed GRE pipes to three set of nozzles which are generally pointed downwards and hence these nozzles spray water which washes down the exhaust gas and is eventually drained overboard. The exhaust gases are then passed over to the atmosphere from the top of the scrubber.

The scrubber also contains a demister which is used to de-mist the exhaust passing out of the scrubber. The fourth set of nozzles ensures that the demister is cleaned properly when the scrubber is stopped. This is done automatically to ensure the cleanliness of the scrubber demister.

Several fail-safe valves are provided in the system to provide 100% redundancy and ensure the smooth operation of the scrubber.

It must be noted that the scrubber must be operated after being trained properly as the improper operation of the valves can cause a lot of unintended problems as we all say that 805 of the errors are caused by the human error.

An exhaust gas bypass valve is also installed for the individual engines to bypass the scrubbed in the case of an emergency.

Meanwhile, this looks easy, but there is a lot of automation involved which indeed can’t be relied upon.

It must be noted that the wash water inlet to the scrubber and outlet from the scrubber is measured for the following five parameters: This is called as Waste Water Measurement System (WWMS).

It is the measure of the acidity or alkalinity of the liquid. Below 7 is considered to be acidic and vice versa. The lowest pH acceptable of the discharge wash water is 3.5. Wash down effect is larger with the increase in alkalinity of the seawater.

It must be noted that the pH of the discharge wash water is continuously monitored and the alarm is generally set at 3.2. When the pH falls below 4.2, the output of the process pumps increases by 0.5%, if the pump is in auto.

These are hydrocarbons which have a structure made of aromatic rings. These are supposed to be measured in the wash water as they are environmental pollutants generated from the fuel combustion indicating the quality and the condition of the engine.

The maximum value acceptable is 42 micrograms/Litre. These are measured in Phenathrene Equivalence units PAHphe. The PAH value is allowed to be maximum for a 15 minute period in 12 hours in a continuous monitoring system.

It is basically the cloudiness of the water. Or in simple terms, it could be described as the tendency of water to lose its transparency. This could be affected by the water being muddy in river passages.

It doesn’t relate directly to the contaminants or exhaust particles from the engine but it gives a brief idea on the condition of the water. The maximum acceptable value is 25 FNU (Formazin Nephelometric Units) and is a differential between the inlet and the outlet wash water respectively. It works on the principle of light scattered light.

Again, for a 15 minute period in any 12 hours, it may exceed by 20% as this is considered acceptable.

There is no specific limit to measure the wash water temperature but it directly indicated the quality of the exhaust gas which is related to the condition of the engines.

These are generally measured by a shore analysis team. Though on-board tests could be carried out for compliance. The Nirates are formed after the Oxides of Nitrogen react with wash water and hence are discharged overboard.

In this mode, the exhaust passes through the scrubber with the wash water turned off. Though the exhaust gases might not be washed down for the oxides of sulphur, it gives a brief idea of the robustness of the scrubber and the efficiency with which it has been installed and built.

This mode could be used when the vessel is trading in Emission Control Areas or using the compliant fuel with 0.5% VLSFO.

Documents To Be Maintained Onboard:

After the scrubber has been commissioned on the vessel, it has to be approved by the classification society and for that, there are two schemes that are applicable for the acceptance.

SOx Emission Control Plan (It acts as evidence for the authorities to state that the fuel oil compliance standards are fully met on-board).

OMM – B: Onboard Monitoring Manual – Scheme B (It provides the information on each and individual component in the engine room which would burn fuel and hence its compliance would be verified).

EGC Record Book – Scheme B (Some Flag States also accept the electronic form of the same).

Scrubber Failure While In Operation – How To Survive?

To be frank, you just have an hour to keep your things in place and sweat it out! This means that is the scrubber fails while in operation and becomes inoperable, the vessel will not breach the regulations and will have just one hour to change to the compliant fuel.

Further to above, the same will have to be recorded in the EGCS record book.

Used All The Compliant Fuel? You Do Have A Silver Lining!

• There could be a possibility that the scrubber fails and the ship doesn’t have the compliant fuel (it could happen due to the failure of the monitoring instrument or control system error which can not be maintained onboard).

In this case, the vessel will have to communicate to the Flag administration, the coastal port authorities or the respective port authorities about the proposed course of action, which must be approved and accepted by all of them.

Moreover, the vessel will be allowed to complete its current voyage without deviation and carry out the bunker operation for the compliant fuel at the next port of call.

• Further, if the ship’s CEMS fails, then the vessel will not breach the regulations as the MARPOL Annexure VI states that the emissions should not result from the damage to the ship or any of its equipment.

The vessel is supposed to take all the precautions to minimize the emissions from the equipment is damaged if any.

Discharging Wash Water Overboard? You Might Want To Pull Your Socks Up!

Do we really think about aquatic life and the environment? Do we? I think, we do. That’s certain as many countries have been biting the bullet by not accepting the wash water discharged from the open-loop scrubbers.

Well, if you may get into the technicalities then these countries would either ask you to change over to the compliant fuel or may not allow you to trade in their regions at all. Thus, this is the price every genius has to pay.

Scrubbers were installed as they are posed to be the potential source of loss mitigators by burning cheap fuel, that’s like getting back to basics of fuel-burning at 3.5% sulphur fuel oil.

But we all know that if the vessels are asked to change over to the compliant fuel which is 0.1% sulphur in ECA, that too frequently, then the maintenance on the engines increase which includes additional costs as well.

Frequent change over from LSMGO to HSFO and vice versa causes the wear of fuel oil pumps as LSMGO is a fuel with low lubricity and hence can’t lubricate the fuel oil pump plungers and barrels altogether.

I recently had a detailed conversation with one of the technical superintendents of MAN B&W and he clearly stated that frequent change over from LSMGO to HSFO and vice versa is the main reason for the degradation of the fuel pumps.

It must be noted that the cylinder oil used for the lubrication of liners should be of low TBN for fuel with low sulphur, which is thus expensive and requires additional storage and consumption costs.

Here is a list of countries with respective ports which do not allow the wash water from the scrubber to be discharged to the sea, owing to its alkalinity.

What are your views on scrubbers on ships?

Is it boon or bane?