However, ship’s auxiliary engines are not easy to tame. They need constant monitoring and maintenance for running at all the times and for preventing them from bringing the ship to a stand still.

Mention below are eight signs to check in your auxiliary engine.

If the generator is not taking the rated load then there are chances that it is having some serious trouble. Signs like overall temperature of the engine going off-limit, important parameters showing abnormal figures and unusual fluctuations etc. indicates that the generator needs some serious checking. 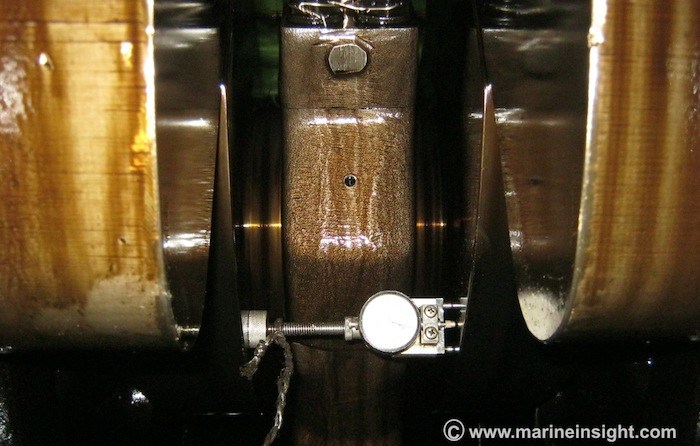 A ship’s engineer must keep a close eye on all the parameters, especially while taking performance readings of the auxiliary engine. If there is high peak pressure variation in any of the generator units as compared to the average pressure, it indicates that the combustion chamber needs immediate overhauling.

Examining the quality of the lube oil is yet another way to find out about the condition of the ship’s auxiliary engine. If it is found that the lube oil is degrading and needs to be removed before its running hours limit due to sludge formation, it may indicate blow past of the units. Such condition would require finding out the faulty unit followed by major overhauling.

Degradation of lube oil would also lead to choking of filters, major reduction of oil pressure, and sudden increase in differential pressure. It is important to keep a track of these signs as well.

If any type of metal particles (small or large) are found in the filters, it indicates that major wear-down of bearings is taking place. This would require immediate overhauling of the faulty unit.

Observe the knocking sound closely, if the sound is increasing at a faster rate, it is better to rectify the faulty engine as soon as possible.

Over-speeding of generator is a situation wherein uncontrolled acceleration of the engine takes place, leading to mechanical failure and serious accidents. Mostly, it occurs during the time of starting, but can also occur when it is running on load due to fuel pump getting stuck or problem in the fuel system. Check if your engine is over-speeding and take measures accordingly.

A marine engineer has to take timely measurement of crankshaft i.e. crankshaft deflection with the help of dial gauge. If the readings are above the normal limit, it indicates problem in the main bearings or alignment of crankshaft, requiring immediate action.

Last but not the least, keeping a track of the running hours is extremely important to know when the engine would require next overhauling. Read the past records and carry out timely overhauling procedures.

These are some of the important points to figure out if your auxiliary engine requires complete overhauling. Do you any other ways to find out problem with auxiliary engines? Let us know in the comments below.

D’carb or major overhauling of a ship’s generator is a very tedious task for marine engineers on board. Following a step-by-step procedure backed by systematic planning is the base of a successful generator overhauling procedure.

A Step-By-Step Guide to Overhauling Generators on Ships is a digital book which explains the Generator D’Carb Procedure in a practical way. From planning to running-in and inspection, the guide provides a detailed explanation of all the aspects involved in major overhauling of generators on ships.
Report an Error

10 Situations When Ship’s Generator Must be Stopped Immediately
10 Important Tests for Major Overhauling of Ship’s Generator
How is Power Generated and Supplied on a Ship?
What’s The Criteria For Reuse or Replacement of Auxiliary Engine Connecting Rod On Ships?