Carnival Fantasy, the fantasy class flagship of the Carnival Cruise Lines has finally beached in Aliaga, Turkey marking the end of her last voyage. The ship is one of the four that had been announced to be leaving the fleet after Carnival Corporations made the decision to sell 13 of its ships earlier this year.

On July 23rd, 2020, Carnival Cruise confirmed that Fantasy had been sold and sent on its final journey to Turkey. Other ships of the fantasy fleet to soon follow suit are the Carnival Imagination, Carnival Inspiration, and Carnival Fascination.

The cruise ship had been anchored after its arrival to Tuesday awaiting the run of the ship on the shore by the pilot. Here, the ship is taken out to sea where the engines are put on full throttle ahead and made to run on shore until it stops. 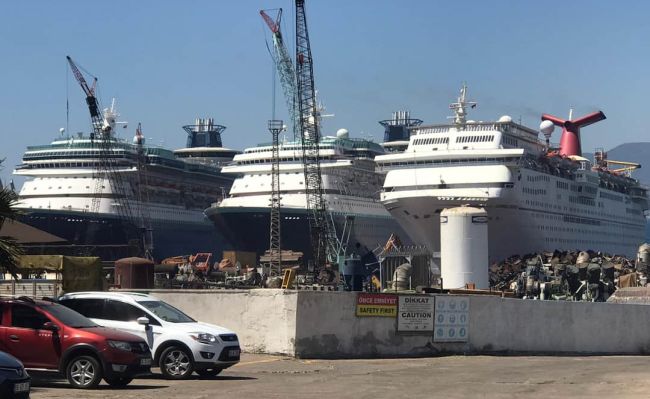 The deconstruction process will begin shortly where the ship will be sliced into pieces and recycled at the world’s leading ship scrapyard. The following days will see the first stage of scrapping wherein all the interior items of furnish from the ship will be ‘recycled’ or sold.
The second stage will be steel-cutting and dismantling of the assemblage of the ship, the same way it was built.

The recycling will include melting steel scrap for roadways and concrete footings and/or selling them to metal dealers.

Carnival Fantasy was last reported to be in Curacao, offloading heavy equipment, alongside Carnival inspiration. The ship now stands beached at Turkey, to be disintegrated in early August.

President Christine Duffy, of Carnival Corporations, has said that 4 ships of the fantasy remain in service, the names being Paradise, Elation, Ecstasy and Sensation. The Lines are in the schedule to resume operation on the 1st of October, 2020.